News Staff
While no one knows that causes posttraumatic stress disorder (PTSD), because it is a blanket term for anything that can be deemed "trauma", one thing is clear: United States Veterans seeking treatment for PTSD as a population are at increased statistical risk of death compared with the general public.

Veterans with PTSD are twice as likely to die from suicide, viral hepatitis due to drug use, and even accidents than the general population.

The paper is retrospective cohort study to identify the leading causes of death among 491,040 Veterans who initiated PTSD treatment at any Department of Veterans Affairs Medical Center from 2008 to 2013; 5,215 of them died within the first year of care. The mean age was 48.5 years, 90.7 percent were male, 63.5 percent were of white race, and 34.9 percent served in the wars in Iraq and Afghanistan. 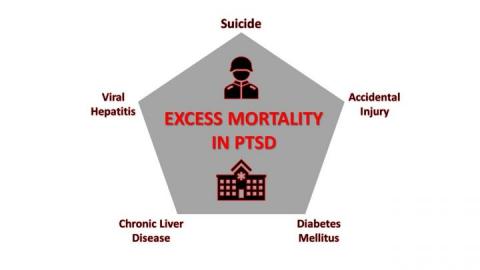 PTSD had a significant increase in all-cause mortality in the year following initiation of treatment; 1.1 percent of them died, which is a 5 percent higher incidence than in the general population. Veterans with PTSD had a twofold increase in death from suicide, viral hepatitis, and accidents compared with the US population. Among individuals dying from accidental injury, more than half died of poisoning, which could include some misclassified suicides.

Causes of death during the first year of treatment were grouped according to age (18-34, 35-64, and 65 or older). To statistically compare the observed mortality among Veterans in PTSD treatment with the general population, standardized mortality ratios were calculated from age- and sex-matched mortality tables of the 2014 US population.

Why has this become a larger problem?

Though PTSD has long happened it was the political landscape following the invasion of Iraq that made publicizing it heavily part of the cultural agenda. Just like copycat versions of anything that get media attention, some people diagnose themselves and it then becomes a self-fulfilling wish. The military is not taking chances, if someone exhibits symptoms of PTSD behavior, they are going to diagnose PTSD.

Pain treatment has also improved, which makes it more common. Though far fewer people died in the last mideast war than in previous conflicts, there were still combat injuries that were not fatal thanks to medical advances. Some of these result in chronic pain while others may result in chronic painkiller usage. Such recreational use of drugs can be the common thread among suicide, accidental death by poisoning, and hepatitis. Epidemiologists can only speculate about the root issue but preventive interventions that target PTSD and comorbid depression are being developed. The paper posits that lifestyle modifications may reduce the risk of diabetes and chronic liver disease in this patient population so veterans seeking treatment for PTSD should receive comprehensive education on the benefits of diet and exercise and the risks of chronic stress and substance use," commented Dr. Forehand.