News Staff
Though anaphylaxis is rare, you are more likely to be murdered this Thanksgiving than die from a food allergy, companies and schools are increasingly buying epinephrine auto-injectors (EpiPens), which has led to shortages (government approval policies make it difficult for competitors to enter the market) and thus high costs. Though rare, the consequences of anaphylaxis are high, much more severe than using it when it might not be necessary.

If you are one of the millions of people in the U.S. who now carries an epinephrine auto injector (EAI) you probably wondered if it will still work if it freezes this winter. It will, according to new research being presented at the American College of Allergy, Asthma and Immunology (ACAAI) Annual Scientific Meeting.

"Since many people who live in cold climates use an EAI, we wanted to explore the effects of freezing on how an EAI functions," says Julie Brown, MD, abstract author. "Lead author and researcher Alex Cooper took 104 same-lot pairs of EAIs and froze one of each pair for 24 hours, while the other was kept at recommended temperatures as a control. Once the frozen devices were thawed, they and their controls were injected into meat. The meat and devices were weighed both before and after firing. The change in meat weight and device weight was similar between frozen-thawed devices and their controls, indicating that freezing did not affect how the EAIs functioned once they were thawed." 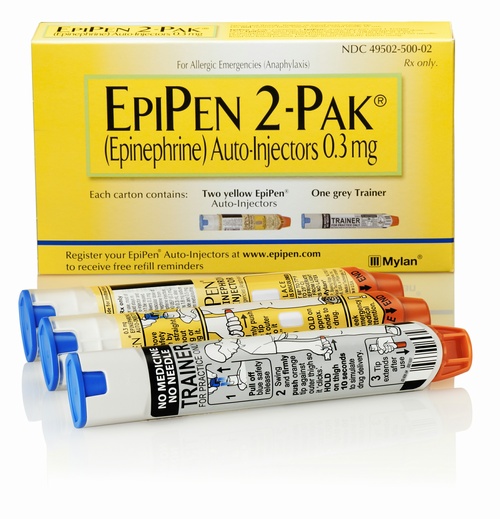 This is epinephrine and a needle, both of which are known in use for a hundred years, so why does FDA treat each new product like it was just invented when it comes to approval, and hand Mylan and monopoly market? It's a mystery. But at least they still work if you accidentally leave them in the car this winter. Credit: Mylan.

"Many people who use EAIs have been concerned about the current shortage of EpiPens," says allergist Anne Ellis, MD, chair of the ACAAI Anaphylaxis Committee. "It's important for those who have severe, life threatening reactions to their allergies to have confidence in the EAIs they carry and know they'll work in an emergency. This study showed that even when an EAI has been unintentionally frozen, the risk is low that it will malfunction."

If you have an EAI that was unintentionally frozen, and you experience an anaphylactic reaction, it's better to use a 'thawed' device than nothing at all. However, you should talk with your allergist about a prescription for a new device.

"The study did not examine the amount of epinephrine remaining in the solution after it had been frozen," says Dr. Ellis. "We know epinephrine is a somewhat unstable compound, and that's why the shelf life of EAIs is so short."

If you have a severe allergy that could result in anaphylaxis, see an allergist. Allergists are trained to help you live the life you want by working with you to treat allergic diseases and avoid severe reactions.