News Staff
The colorful Aurora Borealis (Northern Lights) occur when charged particles from the sun interact with gases in Earth’s during darker winter months in high-latitude regions like Alaska, Scandinavia, and Iceland but a geomagnetic storm predicted for this weekend could result in aurora sightings even in Montana.

When particles from the sun interact with Earth’s magnetic field and atmosphere and gases like oxygen and nitrogen, they gain energy and later release it, creating the light shows. 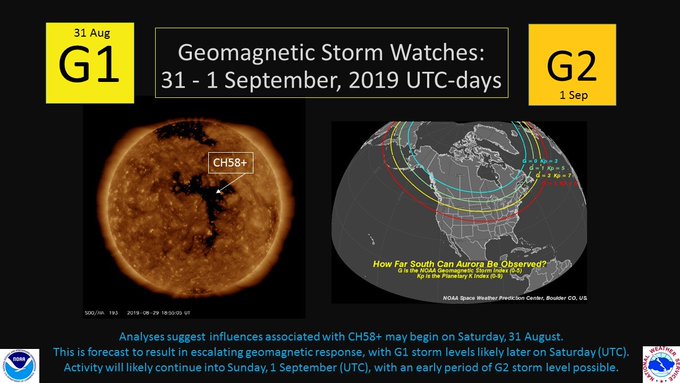 if you don't have clouds and are in much of the northern US this weekend, you may get lucky and get an atmospheric summer treat. The Dark Site Finder can help.

A G2 Watch is now in effect for 1 Sep; while the G1 Watch remains in place for 31 Aug. These geomagnetic storm conditions are forecast in response to CH HSS effects. Visit https://t.co/9n7phHb5ok for more detailed information and the latest updates. @NWS pic.twitter.com/Lr7S3s7l6G

The OVATION Aurora Forecast Model shows the probable intensity and location of the aurora predicted for the timed shown at the top of the map, based on current solar wind conditions using a fixed 30-minute delay time. A 30-minute delay corresponds to approximately 800 km/s solar wind speed as might be encountered during geomagnetic storming conditions.

Note that the aurora will not be visible during daylight hours; however, the aurora can often be observed within an hour before sunrise or after sunset.

As you might expect, around midnight will provide the best chance so throw a tent in the Prius and get out of the city.
News Articles
More Articles All Articles
About