News Staff
A distant planet has an abundance of helium in its atmosphere so great that it has swollen to resemble an inflated balloon.

The helium of HAT-P-11b, 124 light years from Earth and in the Cygnus constellation, is blown away from the day side of the planet to its night side at over 10,000 km an hour. Because it is such a light gas, it escapes easily from the attraction of the planet and forms an extended cloud all around it.

And it's equivalent in size to Neptune. The helium is in an extended cloud that is escaping from the planet, just as a helium balloon might escape from a person's hand. Helium was only detected in exoplanet atmospheres for the first time earlier this year, though it was first detected as an unknown yellow spectral line signature in sunlight in 1868. Devon-based astronomer Norman Lockyer was the first to propose this line was due to a new element, and named it after the Greek Titan of the Sun, Helios. It has since been discovered to be one of the main constituents of the planets Jupiter and Saturn in our Solar System. 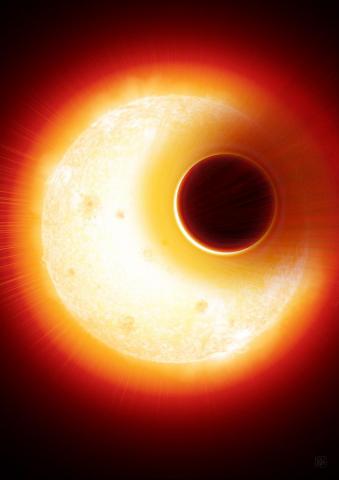 It is also the second most common element in the universe and was long- predicted to be one of the most readily-detectable gases on giant exoplanets. However, it was only successfully found in an exoplanet atmosphere earlier this year.

For this discovery, the research team used the spectrograph, Carmenes, to pull apart the star's light into its component colors, like a rainbow, to reveal the presence of helium. The 'rainbow' data, called a spectrum, also tells us the position and speed of helium atoms in the upper atmosphere of HAT-P-11b, which is 20 times closer to its star than the Earth is from the Sun.
News Articles
More Articles All Articles
About