News Staff
Buprenorphine, a lifesaving opioid addiction medicine, is FDA-approved by the Food and Drug Administration (FDA) for use in pregnant women, but doctors need an X-waiver, a certification that allows them to prescribe opioid treatment medications.

Buprenorphine is a "partial-agonist" which soothes the brain's cravings for opioids by partially activating opiate receptors, and binding to them tightly, decreasing the risk of fatal overdoses.
Obtaining an X-waiver requires training, but it's only eight hours for physicians and 24 hours for nurse-practitioners and physician assistants.

Despite that, data on doctors who accept Medicaid found that of 31,311 obstetrician-gynecologists, only 560 had their X-waiver - 1.8 percent. At a time when pregnant women abusing recreational drugs is increasing. Debunking claims that doctors in cities are more up-to-date, the data showed suburban and rural doctors were far more likely to have obtained the additional certification. There are fewer OB-GYNs in rural areas where physician incomes will be much lower than cities so the data are skewed there, but suburban doctors were also well ahead of their urban peers. 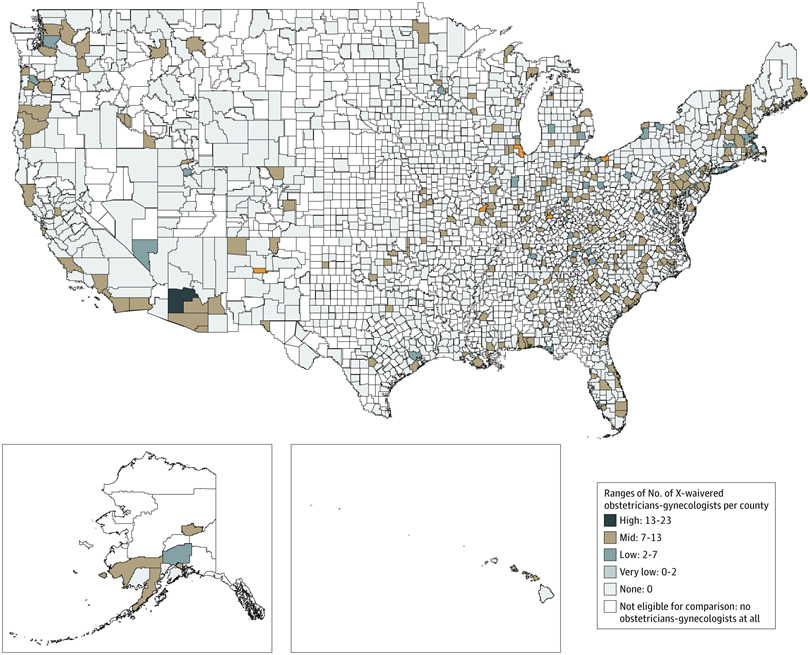 The reason for such low interest may be the stigma associated with opioids, where pop culture posturing has meant legitimate pain patients with cancer have been lumped in with recreational addicts who abuse drugs even during pregnancy. It could also be that while the relative number of pregnant women abusing opioids may have gone up a lot, e.g. from 1 to 5 is 500 percent to activists, in absolute numbers (e.g. 5 is not many) it could still be so minor that doctors with already full schedules don't want to take a full day off of work for a prescription they may never need to fill.

OB-GYN doctors in areas where the rates of infants born with neonatal abstinence syndrome were highest were five times as likely to have their X-waiver compared to those in the areas with the lowest rates of the syndrome but again relative figures may not be giving an accurate picture. If someone tells you that risk of shark attack on a particular beach was up over last year, your relative risk in Tennessee is still none.

And companies employing scientists that make new drugs need to think about earning that money back.  "When buprenorphine was rolled out, the pharmaceutical campaign targeted private practice physicians who likely had more time to do the X-waiver training. If you work in a FQHC (federally qualified health center), time is a much rarer commodity and it's less likely that you can commit to that," said lead author Max Jordan Nguemeni Tiako, MS, a medical student at Yale University in their statement.

Which would explain the uptake among suburban doctors, who have mostly white, commercially insured patients rather than Obamacare/Medicaid.
News Articles
More Articles All Articles
About