News Staff
The largest Tyrannosaurus rex skeleton discovered so far, and therefore the largest carnivore on land currently known to science, was discovered in 1991 in Saskatchewan, Canada, but the extremely hard matrix surrounding the bones, in combination with the size of the skeleton of Tyrannosaurus rex (RSM P2523.8), made it especially difficult and time-consuming to remove, assemble, and study.

Since is is relatively complete (roughly 65 percent), RSM P2523.8 has finally been described in The Anatomical Record: Advances in Integrative Anatomy and Evolutionary Biology.

Bone analyses revealed that this particular T. rex lived an unusually long and particularly violent life. Its body mass was estimated to be approximately 8,870 kgs, surpassing the 8,460 kg of the old record holder and an estimated weight more than 40 percent greater than the next largest known dinosaur taxon. 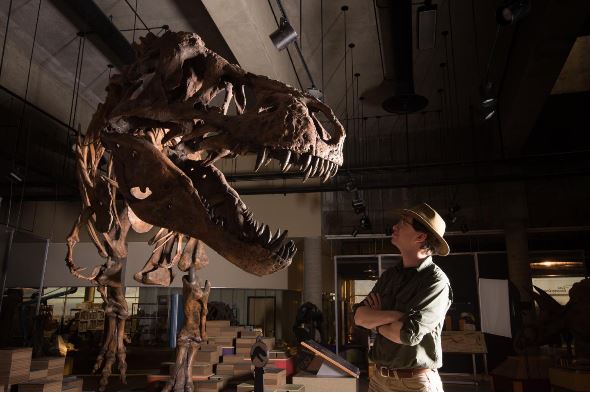 There is no reason to think this will be the largest. Fossilization is serendipity as much as anything but these records keep getting broken for a reason.

The discovery suggests that different types of dinosaurs may have grown to significantly greater sizes than currently known specimens indicate.