News Staff
Though CO2 emissions have plummeted in the United States, as developing nations achieve prosperity they will want air conditioners, sanitation and food - and those all require energy. They sure are not going to let already wealthy nations tell them they must be stuck with solar panels.

So climate change may still happen, at least if energy technology stops and fossil fuel use does not. If so, how will plant species will respond to climate change? A 16-year experiment may provide answers. Of course, the experiment is small, the size of two football fields inside the Garraf National park southwest of Barcelona, but it is home to many protected species. So even if it can't model an ecosystem it can model part of one.

Using large automatic shelters, climate for the plants living in their natural environment was changed in order to match climate conditions predicted in the future, by decreasing rainfall and by raising temperatures. The general belief is that global warming and reduced precipitation may lead to more than usual species losses and vegetation shifts in ecosystems around the world. Depending on whether plants are better adapted to warm and dry conditions or to cool and wet conditions, the response to a changed climate is likely to vary even within a region. In the New Phytology study the scientists showed, that within a region, the relative rate and direction of plant response to a changed climate can be directly related to where and which climates the species occur in more frequently. 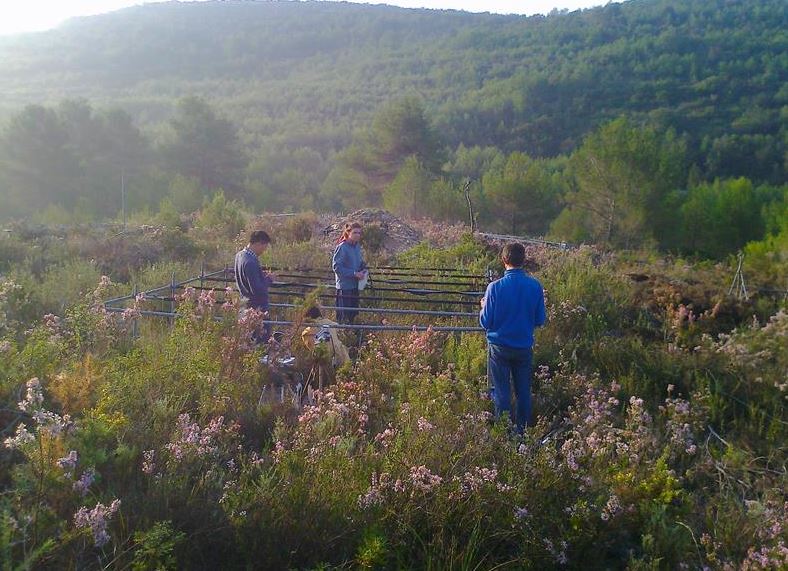 Automatic shelters used to alter either precipitation or temperature in Garraf National Park near Barcelona. Image: Courtesy of Josep Peñuelas

So the researchers used a large online database containing the localities of where the different species in the experiment occurred all throughout southern Europe. These observations were combined with rainfall and temperature maps. This way the average temperature or rainfall requirements of the different co-occurring species in Spain could be used to rank them, based on which climates they are more commonly found. This ranking technique helped the scientists unlock the secrets behind which species were changing in the experiment, and monitor their changes over time.

In this particular experiment, the overall species diversity and vegetative biomass did initially respond negatively, but from 8 to 16 years the overall amount of vegetation was increasing again. Here the researchers showed that the initial decrease was due to a disappearance of the wet adapted species, followed by a delayed increase in the dry loving species. In addition, the novel ranking technique showed, that the species that declined under decreased rainfall, were different to those disappearing under increased temperatures.

By finding that responses were mainly related directly to where the species originally occur more frequently, separately for either rainfall or temperature, they believe predictions can be extended to other future scenarios of climate change.