Josh Bloom
The appearance of another questionable "dietary supplement" story in the news is about as surprising as the sun rising in the east. But this one is different.

This is front page news all over the place, including a piece by Anahad O'Connor of The New York Times. O'Connor focuses on the FDA's failure to take action against companies which sold supplements containing an untested chemical stimulant called BMPEA, aka beta-methylphenethylamine, even though the agency knew about it two years ago.
You probably haven't heard of BMPEA, but you surely have heard about something very similar to it. More on this later. Because if there is a better example that points out the absurdity of a 1994 law that was perversely named the Dietary Supplement Health and Education Act (DSHEA) that allowed for this garbage to be sold, good luck finding it.
And GNC, whose public image isn't exactly splendid at the moment, is involved here as well. This is just about the last thing the company needs right now.
The enormous vitamin and supplement retailer has been squarely in the news lately, because of a recent agreement that was reached between the company and New York State Attorney General Eric Schneiderman. In February, Schneiderman threatened legal action against GNC, Walmart, Target, and Walgreens if they did not remove six common supplements from their shelves. They did. This followed results from state labs, which found that most of what was supposed to be in the bottle wasn't there, but plenty of contaminants were.
During the time that Schneiderman's office was researching this issue, one staffer contacted me; I was subsequently quoted in the AGs March 30 press release:
“Although this agreement is certainly an improvement from the standards that have been in place, and Attorney General Schneiderman should be applauded for his work in this area, this is only the first step. Congress has stripped the FDA of the ability to approve or reject these products, which are essentially unregulated drugs."

I mention this because, although it's fine and dandy that GNC has promised to sell "cleaner" supplements, the real issue is what is actually being sold at all. This is why this story is so intriguing.
To understand the absurdity of regulations that "govern" the supplements industry (not unlike the mayhem in the wild west), and why this particular event is so emblematic of it, we need to take a look at what BMPEA really is. After this, what follows is pretty close to hilarious.
Forgive me for subjecting you to chemical structures, but even if you've never taken a chemistry course in your life, this point should be pretty obvious.

By simply "moving" one methyl group (red circle) a very short distance, amphetamine becomes BMPEA. Although it is not universally true that a small change such as this will result in similar properties of the two drugs in question, in this case it does. Both drugs are in the amphetamine class of stimulant drugs. As such, they are likely to have similar effects on the body, such as increasing heart rate and blood pressure, suppression of appetite, and insomnia. Although BMPEA has never been studied in humans (and if this doesn't bother you, it should), limited data from dogs and cats, and rats and rabbits showed similar pharmacological effects to that of amphetamine.

If the chemical name amphetamine doesn't mean much to you, Adderall— one of the drugs used to treat ADHD in children—probably does. Amphetamine and Adderall are not simply similar, they are identical, all of which makes the following especially bewildering: 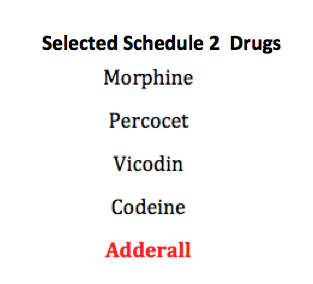 Drugs with abuse potential are placed on different lists by the Drug Enforcement Administration. Their classification (also called Schedule) is based on the abuse potential of the drug in question.  Schedule 2, which is defined by the DEA as 'having a high potential for abuse,"
is the most restrictive category of all approved drugs.  This makes it difficult for even patients with legitimate needs to obtain. I recently wrote about the folly of the DEA's plan to combat narcotic abuse.
(Schedule 1 drugs are "drugs with no currently accepted medical use and a high potential for abuse.")

Yes—what you are seeing is correct. Adderall is on the same Schedule 2 list as morphine and codeine. If you would like an example of a nonsensical policy, look no further. The DEA is trying to address the drug addiction epidemic in the US by placing stricter restrictions on certain drugs, and the FDA is either handcuffed by DSHEA from keeping untested drugs off the market, or, in this particular case, it actually had the authority to withdraw the damn stuff, but did nothing. It's sure nice to see our government agencies working so closely together.

The result: you can buy all the BMPEA that you want at your favorite supplement shop, while having to jump through hoops to get a prescription for a very similar drug for your kid. If this is not an example of governmental insanity, then nothing is.

Not surprisingly, GNC sells a "fat burning" supplement called Phenyl Core. It does not take much imagination to see where this is going. Yes, Phenyl Core contains a number of chemicals, including BMPEA. 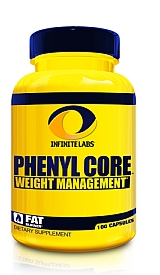 I'm not as sharp as I used to be, so perhaps I'm missing something. So, if you can make any sense out of this, please let me know. And, if you need a little something to keep you awake so that you can research this, GNC offers a pretty good remedy to your problem.

Maybe some of the stores are even open all night.
Pfired but still kicking
More Articles All Articles
About