Tommaso Dorigo
The ATLAS Collaboration, one of the two high-energy physics experiments at the CERN Large Hadron Collider, has just produced updated results of their ongoing search for new heavy particles decaying into lepton pairs. They are now using up to 236 inverse picobarns of 7 TeV collisions, which is seven times more data than previous searches based on 2010 datasets. A seven-fold increase in data size grants a significant increase in sensitivity, so it is worth taking a look at what they see.

The technical way to call the sought particles is "Z' resonances", since they can be thought of as heavier brothers of the Z boson, although they may well have different properties; they are usually the result of adding one U(1) group to the group structure of the Standard Model (which is a SU(2)xU(1) combination, plus a SU(3) for strong interactions). U(1) is a one-dimensional unitary group of transformations, and it introduces just a new particle in the theory, a new boson which mediates a new interaction. A Z' might not explain a lot about the way things really work at a fundamental level, but many like such "minimal" extensions of the Standard Model, mainly because they are easy to cook up and not in too striking disagreement with current data.

The search for Z' resonances is pursued with momentum in CMS and ATLAS. I know what is going on in CMS being a member of that collaboration, but I only get to know where ATLAS stands when I get to read their public papers. That's why I am interesting in checking their high-mass spectrum, to see if they see anything at odds with predictions. In two words, they don't. Check it out in the dimuon invariant mass distribution below: 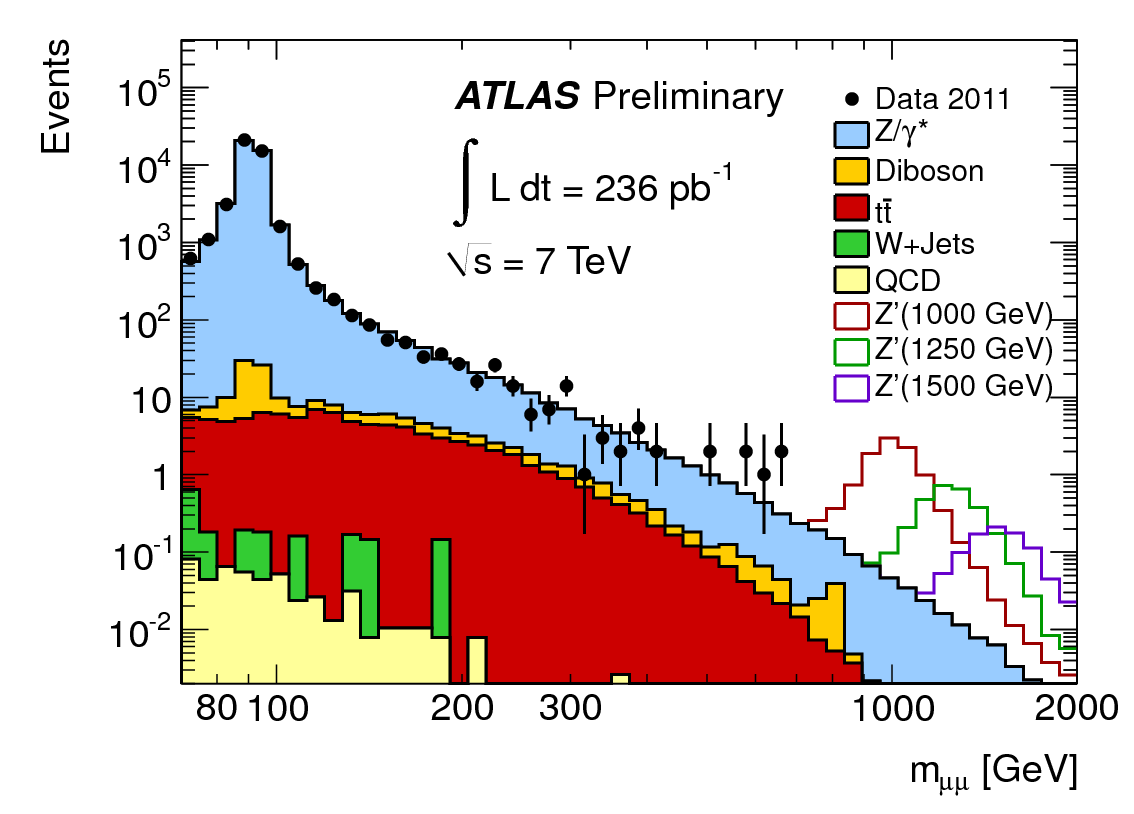 The data are black points (a very stable standard by now, unfortunately about the only world-wide agreement among HEP experiments -a painful concept for those like me, who are working to reach at least lab-wide agreements on limit-setting procedures and other highly less trivial things), and backgrounds are shown with different vivid colours. Of course by far the most important process contributing to the data (which feature two muons and little else in the event) is Drell-Yan production -the process whereby a Z boson or a virtual photon is produced by quark-antiquark annihilation. This is shown in light blue. Other processes include the production of two bosons together (ZZ, or ZW), in yellow; and top pair production (in red). The data, needless to say, closely follows the sum of backgrounds, while a Z' resonance would produce a curve such as the empty histograms shown on the right (which correspond to the signal one would see if a Z' existed with a mass of one to 1.5 TeV).

A similar plot is produced for events containing electron-positron pairs, see below: 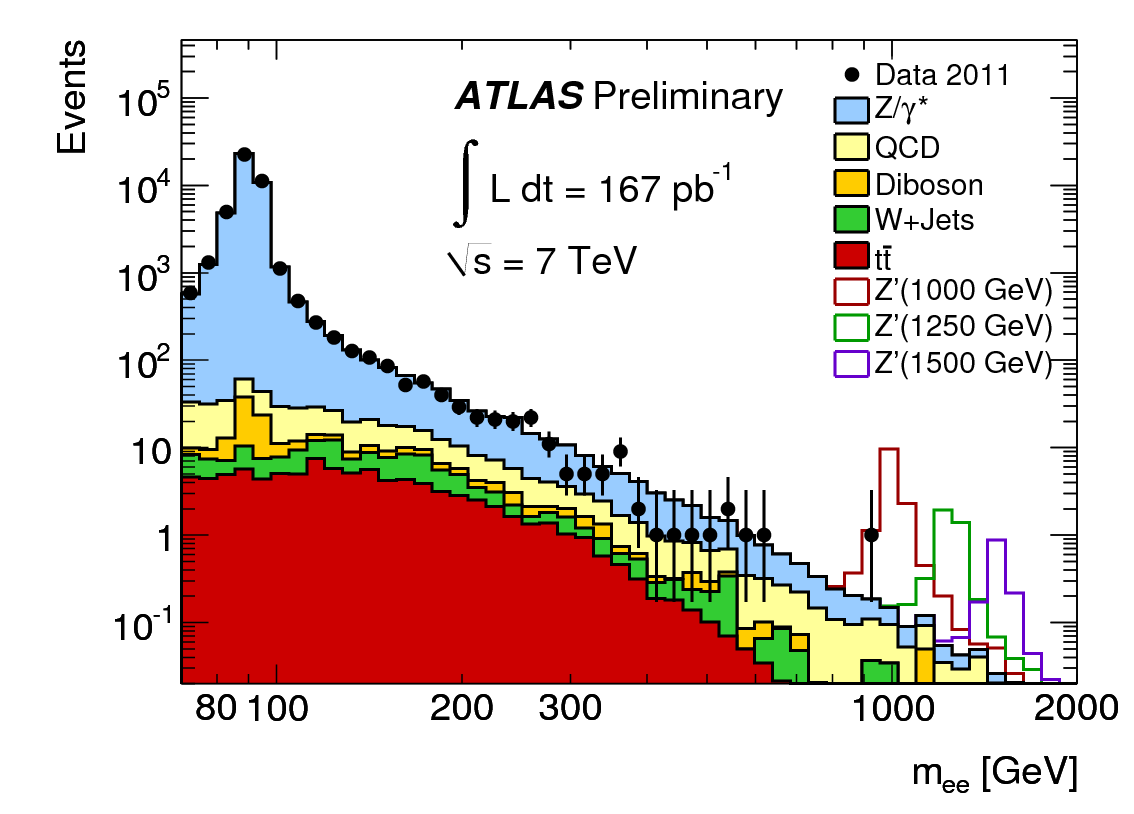 By comparing the two figures one notices a few things. First, the dielectron spectrum includes a non-negligible amount of QCD background (light yellow), which is basically absent in dimuon events. This is due to the non negligible fraction of electron candidates which are actually hadronic jets: you cannot get rid of that background to electron candidates, really. It arises when a jet fragments into a leading charged pion, which leaves a nice stiff track in the central tracker, and then upon entering the electromagnetic calorimeter undergoes a nasty process called "charge exchange", whereby it becomes a neutral pion. The neutral pion immediately decays into two photons, which proceed to yield an electromagnetic cascade which mimics awfully well the signal of a single electron.

A second thing to note is that the resolution of a dielectron resonance of high mass in ATLAS is surprisingly good compared with the one for dimuons: the Z' signals are much narrower in the latter figure. That is one distinguishing feature of the ATLAS detector (for CMS things are different, due to the characteristics of their muon system and tracker).

In the end, ATLAS can exclude new Z' bosons of a variety of models (all similar, but slightly different in the resulting new particle cross section predictions). Limits are set in the 1 TeV - 1.2 TeV range. For more details, see the public page of ATLAS results here.
A Quantum Diaries Survivor
More Articles All Articles
About