NASA's Hubble images of distant galaxies by gravitational lensing. How an astronomer sees them.
By Hontas Farmer | January 9th 2014 05:00 AM | Print | E-mail

The most scientifically interesting objects are not the bright blueish white ones in the center of the image, but the small reddish looking ones off to the sides.  Here's how and why.

Astronomers working with the Hubble and Spitzer (infrared) space telescopes released an image showing some of the most distant galaxies ever by taking advantage of gravitational lensing due to the massive Pandora Cluster. Gravitational lensing is an effect in which the gravitational field of a large mass bends the path a ray of light will follow. This creates an effect predicted by Albert Einstein and first observed by Arthur Eddington during a solar eclipse in 1919. In the case of the mass of the Sun it can bend the light of a star in the sky by a tiny fraction of a degree. In the case of a cluster of galaxies with the mass of billions of stars the results are images of even more distant galaxies.    Those are the most distant objects.

This was done as part of the “First Frontier Fields” observation program. This program will look at a number of galaxy clusters using the Hubble and Spitzer telescopes in long exposure mode. (1) By gathering light, photon by photon, over a long period an image of distant faint objects builds up. By using gravitational lensing even more distant objects are brought into focus. A massive celestial object, a galaxy cluster, becomes a tool of opportunity and an eyepiece on the early universe. Here is how it works.

In the above graphic the galaxies 1 colored white are taken as being “at rest” whatever their velocity as determined by the Doppler effect is used as a reference for colorizing the rest of the image. The objects marked 2 in red, are behind the galaxy cluster and are always going to be colored red relative to the lensing object. This is because as the universe expands the most distant objects will be receding from us. This is more or less the same effect that causes a train’s horn to sound different weather it is approaching or moving away. The objects marked 3 in blue are either in the foreground or simply less red than the objects marked 2. They are blue and closer to us relative to the reference cluster than the other objects in the image. The inset shows how this will appear to the observer. Multiple images of the same object will appear symmetrically around the lensing galaxy cluster.

This animation by the European Space Agency shows the same effect.

With the above in mind take a look at the actual image from NASA. I have marked it up with red arrows pointing out the reddest objects I see in this image. 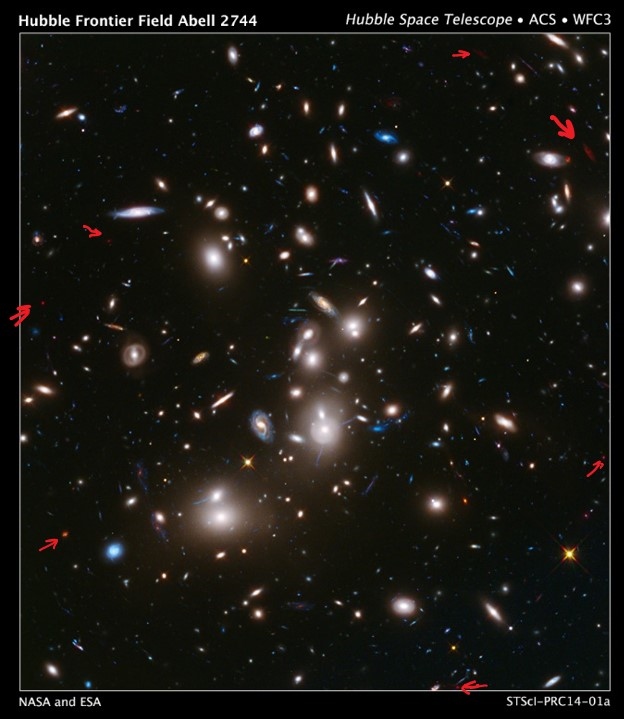 If it has been colorized the way I would have colorized it, as explained above, those objects are the ones the scientist are most excited about. Not the big shiny bright blue-white cluster which catches the eye and the imagination of even a school child. Nope. The tiny little smudges of reddish light at the edges of the image are the most scientifically interesting objects in the image. Galaxies or proto-galaxies like those went on to form the galaxy we live in.

These objects are more luminous than was expected because of the rapid formation of massive stars in them. The heavy elements formed in stars, like those stars, are in our very bodies. Every atom of calcium, every carbon, oxygen, and iron atom in your blood’s hemoglobin, everything you see and touch and eat, except hydrogen in the water, was formed in the heart of massive stars. Understanding the environment in which these things occurred will help us understand our universe and our world that much better.

The objects that astronomers are most interested in are likely the small smudges of red light at the edges of the image you see all over the web, not the brilliant white and bluer objects towards the center.