For the first time, astronomers have measured the true colour of a planet in orbit around another star, and it is cobalt blue. This blue however, is probably the colour of a continuous rain of liquid glass, on a hot and windy planet. If you could make continuous observations of the overall colour of an exoplanet for half of its year, you could build up images of its surface. In the case of an Earth like exoplanet, you could map its continents, ice caps, cloud cover and any vegetation by the remarkable technique of Spin Orbit Tomography.

This new planet is HD 189733b. At 63 light years away, it's one of the closest planets discovered by the transit method. It's orbit is almost edge on, so that regularly it passes directly between its parent star and ourselves.

Using Hubble Space Telescope, the astronomers were able to find the true colour of the planet from the change in the light of the star as it crossed between it and us. (wayback machine archive of the article)

"On this turbulent alien world, the daytime temperature is nearly 2,000 degrees Fahrenheit, and it possibly rains glass -- sideways -- in howling, 4,500-mph winds. The cobalt blue color comes not from the reflection of a tropical ocean as it does on Earth, but rather a hazy, blow-torched atmosphere containing high clouds laced with silicate particles. Silicates condensing in the heat could form very small drops of glass that scatter blue light more than red light."

In future though, we may be able to observe planets directly and detect their colour. To do that you need to hide the light from the parent star, if you can do that then you could photograph the planet on its own.

We might be able to observe distant exoplanets as a single dot of colour, are, similar to the Voyager 1 observation of the Earth as a pale blue dot.

Remarkably, if you could take continuous observations of an exoplanet, as a single dot, integrated light of the entire planet, you can also build up maps of the planet, with its continents, its snow cover and its cloud cover. To do that you need to observe it through half of it's "year", using a technique of Spin Orbit Tomography.

The image to the right shows the clouds, continents and snow cover of Earth reconstructed using a half year of observation of the integrated light of our planet Earth from space.

The authors used a telescope that observes Earth continually, the Terra Satellite which is in a sun synchronous orbit. They combined all the light from the entire image into a single pixel to simulate observation of an Earth like planet around a distant star.

For this to work, the planet must be spinning relative to us. You also need its axis to have a tilt, so that the illumination varies through the year, as with the winters and summers on Earth. But a slight tilt. as for Earth is enough to build up a complete 2D map of its surface.

This is something we might be able to do in the not too distant future. 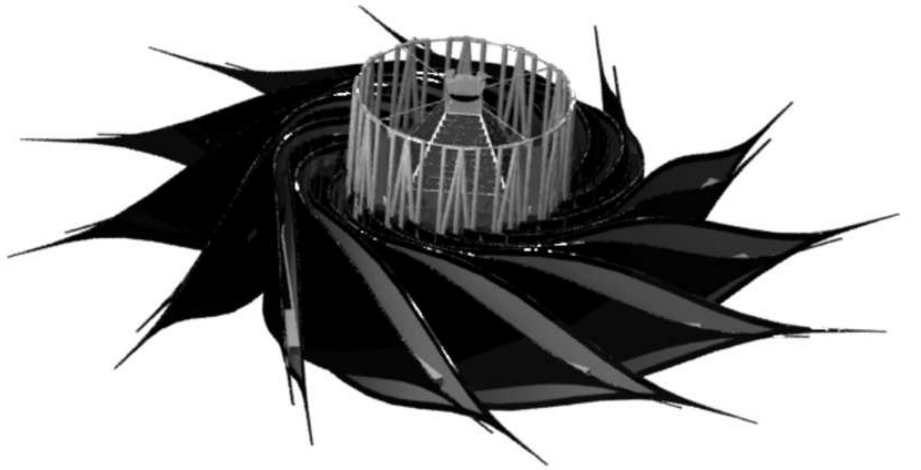 It uses a 2 m width space telescope as used for satellite observation combined with a 34 meter diameter occulter to make direct observations of the light from distant exoplanets, with the parent star hidden from view.

The same technique could be used to observe, and map vegetation and other life forms on exoplanets. Vegetation on Earth has a distinct "red edge" - sharp increase of a leaf's liight reflectance between 700 and 750 nm. You could also detect lichens, bacterial mats, and red algae in a similar way, using their reflection spectra.

Vegetation on Earth is green because it absorbs the highly energetic blue light, and the abundant red light, but reflects green light.

Planets that orbit stars with other spectral signatures might have other colours. For instance if there is bright light useful for photosynthesis right across the spectrum the vegetation might well be black, this could happen in some planets with two or more suns:

Could black trees blossom on a planet with two stars?

A planet with multiple suns or orbiting a dim red dwarf might have black or gray vegetation. like this.

Suns also vary in colour. Cooler stars are red, brighter stars are blue.
Vegetation on a planet that orbits a brighter sun that ours (in absolute brightness) would get abundant blue light and also strong green light and would probably absorb both of those but reflect reds and oranges. The vegetation might tend towards orange and red leaf colours.

Vegetation for a brighter bluer sun than ours, tending towards orange and red rather than our familiar green. Note the orange grass.

For some more images like this see Plants under Alien Suns (at solstation.com)

We may be in for some interesting and surprising discoveries once we get the chance to track the light of distant exoplanets.

Carl Sagan wrote "Pale Blue Dot" inspired by the Viking photograph. Now we may be able to take similar "Pale blue dot" photographs of planets around other stars.

What hidden secrets might those tiny dots of light contain?