Stephanie Pulford
It seems that a new study is always uncovering new health benefits of hot peppers. Garnering a high-profile endorsement  from Hillary Clinton as well as doctors and scientists, peppers' heat producing chemical capsaicin has been linked to benefits ranging from anti-inflammatory properties to cancer killing.  Though capsaicin is beneficial to humans, packing heat isn't a cure-all for the peppers themselves.  A recent study busted the myth that hotter peppers are more resistant to Phytopthora blight.

Phytophthora blight, also known as root rot, is caused by a fungal infection.  Though most parasites have the good sense to drain their host slowly, the Phytophthora capsisi has been known to slay plants within five days of infection.  A bit of witch hazel and a few days' drying can save a houseplant from fungus, but farmers can easily lose vast fields to phytophthora in wet conditions. 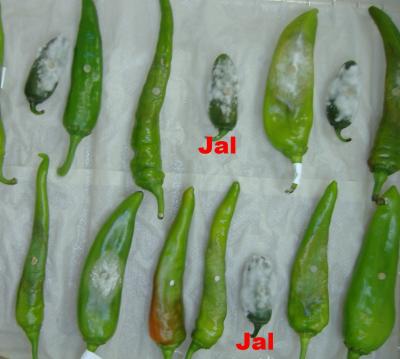 In addition to endangering the world's peppers,  the blight has also caused serious losses in tomatoes, eggplant, cucumber, squash, and melons.  No universally resistant strains have been developed.

When farmers started reporting that their hottest peppers were least affected by blight, it implied more than a good year for habaneros.  If capsaicin could stave off blight, it implied the potential to create blight-resistant hybrids of all susceptible crops.

This makes sense, intuitively.  If capsaicin can kill bacteria, cancer cells and any germs Hillary Clinton encountered on the campaign trail, fungus should hardly be a challenge. According to the authors, the statistics didn't support the story.  The Phytophthora parasite has no particular preference for low heat or no-heat variety, in the capsaicin-rich pepper fruits as well as the unprotected roots.  Researchers will have to look for different chemical or morphological traits to engineer flood-hardy crops.

Blight killer or no, capsaicin is fascinating stuff.  Though it is most commonly associated with the sensation of heat, it has been shown to activate the same sensing pathway as a scorpion sting.  In addition to its culinary value, it is the active ingredient Zostrix osteoarthritis ointment and pepper spray.  Though it is an irritant to mammals, it has no effect on birds.  Coincidentally, pepper seeds become nonviable after mammalian digestion, but bird digestion leaves the seeds unharmed.  Because capsaicin is most concentrated in the pith around pepper seeds, it is thought to have evolved as a deterrant to mammals so that seeds could instead be safely spread by birds.

The chili pepper is fast catching up on the pop-science food trifecta (coffee, chocolate, and alcohol).  It occupies a spot in both Johnny Bowden's The 150 Healthiest Foods On Earth and Oprah.com's "10 Superfoods".  Unfortunately, it won't be making anyone's list of top natural fungicides.  But go ahead surround your tomato plants with cayennes  anyway-studies suggest that capsaicin inhibits the toxic E coli, and experience confirms that the results will be delicious.