Stephanie Pulford
Dave Cooper’s pet mantis, Cinco Zapatos, was a good-looking Giant African Mantis with a notable distinguishing feature: her sixth leg was missing.  It didn’t seem to hamper her much.  Her first weeks as Dave’s insect familiar were uneventful until Dave returned from a three-day trip to find that Cinco Zapatos had molted—and had become Seis Zapatos in the process. Cinco Zapatos had regrown most of her leg.

Though it’s a shock for us to witness, the loss and regain of a limb is no big deal to a young insect.  Bugs lose legs and antennae in fights, flights, accidents, or even a botched molt.  After a few weeks of limping, a new leg appears in the span of an afternoon.  Insects retain the pathways required for cells to differentiate and reorganize at a wound site, an ability that humans have nearly lost.

Cinco Zapatos before and after  leg regeneration.  Image: Dave Cooper.

In the weeks leading up to her molt, the tissue below Cinco Zapatos’ injured stump was quietly preparing for the fireworks.  A blastema, which is a layer of progenitor cells, formed under the wound to rally and reorganize cells into the form of a new leg.  The blastema cells aren’t stem cells that have never been differentiated; they are local cells that have de-differentiated themselves in order to serve a new function in the regenerated limb.  The cells of the blastema reorder themselves into all of the necessary tissues to create a new articulated limb, which is formed as a folded structure inside the injured stump. Cinco Zapatos’ new leg burst forth when her molt opened the old exoskeleton that contained it.

Many insect appendages are structurally primed for a quick interchange.  On predetermined planes of autotomy within the insect leg, most of the living tissue terminates. This leaves a small weak area gap with nothing but a muscle, a bit of nerve, and some brittle exoskeleton-- a perfect place for crack initiation.  An insect’s leg is built to break on this plane in order to escape predators.  Within the next 30 hours, the severed muscle degrades, and the regeneration begins. 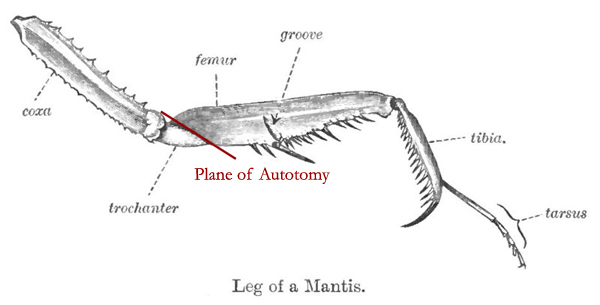 Mantids have a convenient plane of autotomy right between their trochanter and their femur.  But even mantids like Cinco Zapatos, who lose a rear limb at some less favorable amputation point, can grow a new one.  The process is simply slower, and the new leg may be a cruder approximation of its predecessor.

For example, the mantid’s two thick prey-pinching forelimbs have no plane of autotomy; in contrast to the spindly and replaceable walking legs, the complex forelimbs aren’t intended to be disposable.  When a reckless young mantid loses its forelimb between the femur and trochanter, a smaller, less complex copy will regenerate.  These mantids are lucky.  Older mantids who lose the same limb segment later in life don’t generate much of a replacement.  The loss is usually fatal.

The poor forelimb regeneration prognosis underscores some regeneration rules of thumb—an insect can grow back appendages most successfully if the amputated portion is uncomplicated and the insect is young.  Surprisingly, these rules are true for a human as well.  Though we don’t think of ourselves as regenerators, humans have a latent ability to grow back just a bit of complex limb structure.  Last year Lee Spievack became famous for regrowing a segment of his finger thanks to magical pig extract powder;  however, injured children under the age of 12 do this regularly without the help of pulverized pork.    As long as their outermost finger joint remains intact, the suggestible cells of children are willing to differentiate into the skin, flesh, bone, and fingernail of a brand new fingertip, shorter than a Giant Mantis leg but no less complex. 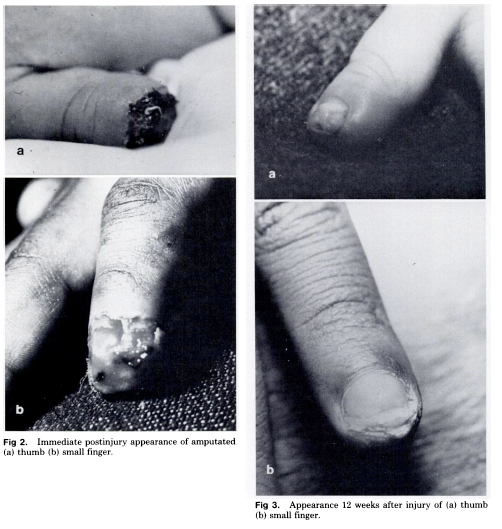