It is often said that the middle of the road is the worst place to drive, yet centrists pride themselves on always arguing the opposite of whatever the conversation is. They believe we should split the difference on all issues, though the actual functioning of the United Nations should have put a stake into the heart of that political vampire by now.

It turns out centrists are endangering their health in other ways, according to BMJ's annual Christmas issue, because by 'sitting on the fence' they are likely to be fatter than commies - especially Trotzkyites, who are always springing from political fad to political fad - and neo-Nazis too.

Like much of politics today, political activism has become bourgeois - ironically, even for socialists, many of whom were dismissed by German thinkers long ago as Kathedersozialismus - those who engage in "socialism of the chair" or "professorial socialism". 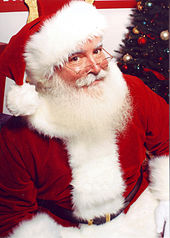 Because when it comes to politics, you'll believe anything.
(Credit: Jonathan Meath as Santa Claus, CC BY-SA 2.5. Uploaded by Tomwsulcer

Today, BMJ notes, there are various other terms for people who have a lot of money but don't do anything but talk about helping others: "limousine liberal" and such. California is littered with them.

To make this determination that centrists are less healthy, someone in the BMJ editorial office pitched an idea where they would get someone to write about responses to the 2005 Eurobarometer survey, finding 29,000 adults, average age mid-40s, and how much physical activity they did every week, along with how much time they spent sitting down.

The survey takers got to rate themselves on political orientation. Translated to American political discourse, that would be 1 (Commie Fag Junkie) to 10 (Greedy Bible-Thumping Nazi) with 3 to 8 being considered centrist.

Only 7 percent were on the left and right but both groups were less couch potatoe-y than the giant swath claiming to be centrists.

According to the BMJ article, people on the right were most active - it apparently takes more walking to stop marriages from becoming more fabulous by allowing gay people to have them than it takes to ban Happy Meals and raise taxes - but people claiming to be centrists were 50 percent more sloth-like than most. They apparently just sit around writing Internet comments starting with "It depends on what the definition of X is" and never do much at all.

"Our findings refute the existence of an armchair socialist," according to the article. "Busy people at both ends of the political spectrum do not seem to have as much time for idleness." The higher physical activity levels reported by political extremists suggest that they might be out "agitating in the field, mobilising the community, and actively distributing ideas and propaganda," they say.

"It is those sitting in the middle (politically) that are truly inactive, and may be sitting more (both on the fence and elsewhere), making them a defined at-risk group," they warn.

And they go on to suggest: "The politically uncommitted and centrists should consider adopting a stronger political stance for their health. This may also reduce their sitting time, particularly if they shift their views to the right."

Note: The research question posed was developed specifically for The BMJ Christmas issue, and was not intended to imply epidemiologically credible health risks of political centrism.

Merry Christmas from BMJ - and of course from Science 2.0 also.