Bourbon, brandy and whiskey are all examples of alcoholic beverages which after fermentation and distillation, require years to age(mature) typically in wooden casks. Dramatically shortening this aging process through the application of sound waves, agitation and pressure is being successfully employed by people both here in the US and abroad.

In Spain, Valme Garcia, professor at the University of Cadiz and his fellow researchers have taken brandy and mixed it with American oak chips. This mix is then subjected to blasts of ultrasound which creates pressure within plant tissue. This causes release of bioactive compounds into  the brandy at a greatly accelerated rate relative to sitting in a sedentary cask.

The resulting brandy was then presented to professional tasters and pitted against traditional brandies. The result was that the ultrasound treated brandy was declared as good as the brandies aged traditionally over several years.

Cleveland Whiskey,founded by entrepreneur Tom Lix, ages its signature spirit in a wooden whiskey barrel for six months. The whiskey is then transferred to a stainless- steel tank along with the cut- up pieces of the former wooden barrel. The tank, whiskey and wood pieces are then subjected to agitation and pressure changes due to ultrasound for about a week.

The process is encompassed and protected by a patent pending. 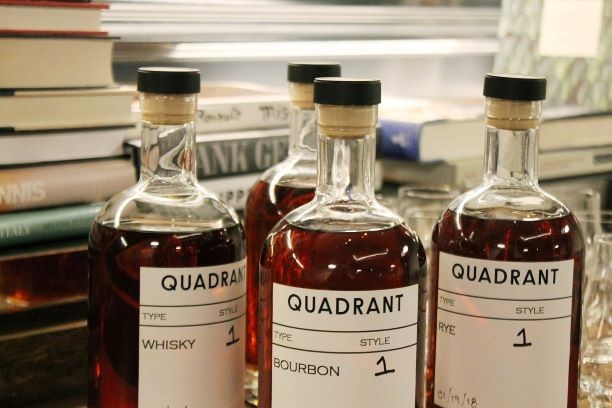 At the Quadrant Bar&Lounge located in the Ritz-Carlton, Washington, DC, lead mixologist Chris Mendenhall subjects whiskey in a wooden cask to ultrasound for 30 minutes resulting in whiskey tasting as though it had aged twenty years!

Mendenhall claims his bar is the only one to publicly pour sound aged spirits in DC and maybe the entire east coast.

Earl Hewlette is the CEO of Terressentia Corporation. Which distills spirits for clients around the world. He says his company patented the use of ultrasonic energy in the preparation of beverage alcohol in 2006. Furthermore he has successfully served several companies with letters of cease-and-desist since they were infringing upon Terressentia’s intellectual property. To make his whiskey Hewlette ages it for six months to a year before applying sonic vibrations, heat and oxygen foreight hours.

Some of Terressentia’s whiskeys have won gold medals at both the San Francisco and New York International Spirits Awards.

While the use of ultrasound to accelerate the aging of spirits seems to offer a potentially powerful tool to the industry given the success enjoyed and medals won, it won’t be without fireworks. Patents filed and letters of cease-and-desist already served all promise to make for an exciting new chapter for the distillers of spirits…stay tuned!

The Science Sage
More Articles All Articles
About