Michael White
If I could do it all over again, I would forget genomics and specialize in the chemistry of Scotch. You may scoff, dear reader, but there are employment opportunities out there (not to mention alcoholic fringe benefits), such as the Scotch Whisky Research Institute (SWRI). Few pleasures (note that it's few, not no pleasures - you know what I mean) are greater than the delicate, intricate taste and aroma of a good single malt Scotch, and the SWRI's mission is to scientifically understand the production and enjoyment of Scotch. 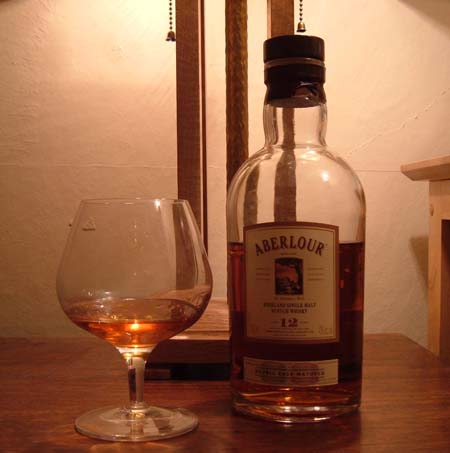 Here is the kind of excitement that you can find in a career in Scotch chemistry:

1. I can't imagine a better use of ANOVA than this:

In other words, statistics prove that you'd better stick with Deluxe or West Highland.

2. Want to know what those oak casks do to your Scotch? Capillary gas chromatography has the answer:

Scotch whisky distillates in casks with different histories, but typical of those used in industrial practice, were compared by chemical and sensory methods over the first 3 years of maturation. Analysis by capillary gas chromatography showed differences in wood-derived components, and analysis of non-volatile and less-volatile compounds by HPLC showed clear changes with maturation time, and differences between casks. Descriptive sensory analysis showed changes associated with the early stages of maturation, and some differences between casks. Sensory descriptor scores associated with wood-derived materials (spicy, smooth, vanilla, woody) were modelled on data from non-volatile compounds using partial least squares regression.

3. And if you're worried about antioxidants in your Scotch, electron spin resonance is the tool for you.:

Electron spin resonance (ESR) spectroscopy has been used to assess the antioxidant capacity of eight Scotch whiskeys by measuring the extent by which the original spirits, or pyridine solutions of their residues, reduced Fremy's radical or galvinoxyl radical. All whiskeys displayed antioxidant activity greater than that of a 0.2 mM solution of Trolox in the Fremy's assay and of a 0.1 mM solution of quercetin in the galvinoxyl assay. The relative antioxidant capacities determined according to the two assays were highly correlated and strongly related to the total phenol content as determined by using the Folin−Ciocalteu method. Activity was a consequence of maturation in oak casks with the “newmake” spirit showing no effect. Of 10 aromatic constituents analyzed, activity was most strongly correlated with ellagic acid and gallic acid in both assays. The reductive capacities of four major phenolics were determined, which, in summation, accounted for 31−53% of the total antioxidant activity of the whiskeys. There was no evidence for synergistic interaction between the phenols investigated.

The chemist in me finds all of this fascinating (especially the fact that phenol is useful for more than just extracting RNA and numbing your sore throat). But most of this research is useful primarily for those who make Scotch. What can science tell those of us who just drink it? Should I add water to release the flavor, and should that water be at room temperature? Just what is going on chemically when I open a bottle of Scotch and pour it in my glass, exposing it to the oxidizing ravages of the ambient air? Do the servers at St. Louis's greatest Scotch bar (and favorite site for lab celebrations) know what they're talking about when they tell us how to drink Scotch?

One intrepid Scotch lover, writing for Chemistry World went to the SWRI to find out (PDF). The whole thing is a great read, but here are some highlights:

- The still is not just important for the distillation of the alcohol - the copper in the still catalyzes a reaction that removes sulphur compounds from the mix.

- White oak bourbon casks (white oak is great for your classic Mission style furniture as well) are great for Scotch maturation in part because in the process of aging the bourbon, the natural vanillin (yes, it's present in more than just vanilla beans!) has been leached out. (This is one reason bourbon tastes sweeter than Scotch.) Charring the inside of the casks before adding the Scotch produces what is in essence activated charcoal, like you have in your Brita filter, a material that extracts compounds from the Scotch (presumably less pleasant ones). Charring also breaks down lignin (a polymer made of derivatives of the amino acid phenylalanine) in the wood, which then reacts ethanol to produce compounds like aromatic aldehydes: 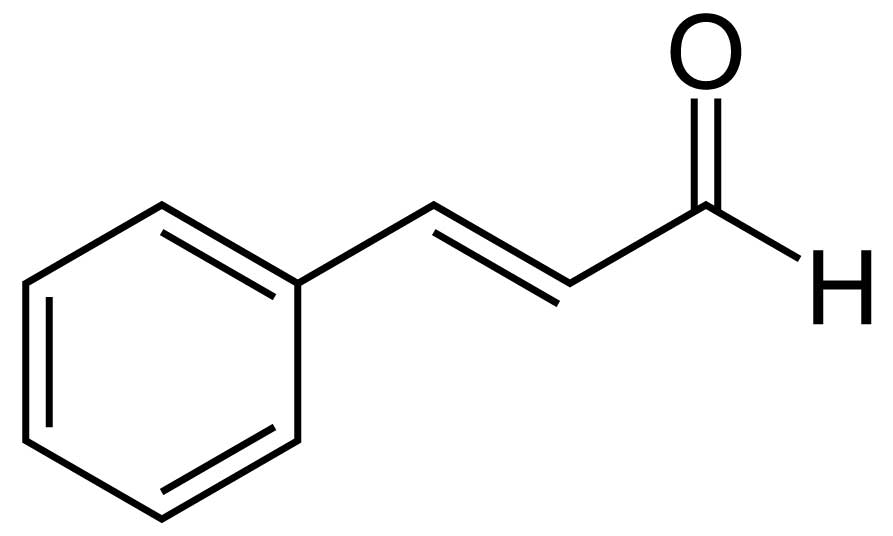 Cinnamaldehyde
And lactones (although these may not be from lignin breakdown - they somehow come from being in the cask):

These compounds add woody and fruity flavors to the Scotch chemistry. (For a more than you would ever want to know about the chemistry of whisky flavor, check out this paper (PDF) from The Journal of the Institute of Brewing.)

Ultimately, my question is whether I should add a little water or just drink my Scotch neat. The servers at my local Scotch bar insist on adding water to release some aroma and flavor. Chemically, you expect any reactions in the Scotch involving water to have largely gone to completion or have reached equilibrium after sitting around for more than a decade. After all, a 40% ethanol drink is about 60% water.

What happens, according to the Chemistry World interview with a SWRI researcher, is due to dilution: as you add water and reduce the overall alcohol level (making your solution less hydrophobic), you change the solubility of various compounds, some of which evaporate and thus come off as enhanced aroma. Different Scotches will have different flavors that you may or may not want to release by dilution, so how much water to add to your Scotch, if any, depends on the particular brew you're drinking. Which means you have to do what any good scientist does, and experiment. At $10 or more a pop at a Scotch bar, multiple trials can get pricey, but hey, if you're in search of the ultimate drinking experience, it's going to cost you.