Michael Phelps, Nastia Liukin, Misty May-Treanor and Lin Dan are four Olympic athletes who have each spent most of their life learning the skills needed to reach the top of their respective sports, swimming, gymnastics, beach volleyball and badminton (you were wondering about Lin, weren't you...)

Their physical skills are obvious and amazing to watch.  For just a few minutes, instead of being a spectator, try to step inside the heads of each of them and try to imagine what their brains must accomplish when they are competing and how different the mental tasks are for each of their sports. 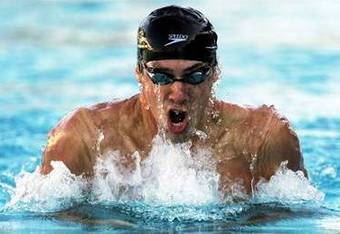 On a continuum from repetitive motion to reactive motion, these four sports each require a different level of brain signal to muscle movement.  Think of Phelps finishing off one more gold medal race in the last 50 meters.  His brain has one goal; repeat the same stroke cycle as quickly and as efficiently as possible until he touches the wall.  There isn't alot of strategy or novel movement based on his opponent's movements.  Its simply to be the first one to finish.

What is he consciously thinking about during a race?  In his post-race interviews, he says he notices the relative positions of other swimmers, his energy level and the overall effort required to win (and in at least one race, the level of water in his goggles.)  At his level, the concept of automaticity (as discussed in a previous post) has certainly been reached, where he doesn't have to consciously "think" about the components of his stroke.

In fact, research has shown that those who do start analyzing their body movements during competition are prone to errors as they take themselves out of their mental flow.

Moving up the continuum, think about gymnastics.  Certainly, the skills to perform a balance beam routine are practiced to the point of fluency, but the skills themselves are not as strictly repetitive as swimming.

There are finer points of each movement being judged so gymnasts keep several mental "notes" about the current performance so that they can "remember" to keep their head up or their toes pointed or to gather speed on the dismount.  There also is an order of skills or routine that needs to be remembered and activated.

While swimming and gymnastics are battles against yourself and previously rehearsed movements, sports like beach volleyball and badminton require reactionary moves directly based on your opponents' movements.  Rather than being "locked-in" to a stroke or practised routine, athletes in direct competition with their opponents must either anticipate or react to be successful.

So, what is the brain's role in learning each of these varied sets of skills and what commands do our individual neurons control?  Whether we are doing a strictly repetitive movement like a swim stroke or a unique, "on the fly" move like a return of a serve, what instructions are sent from our brain to our muscles?  Do the neurons of the primary motor cortex (where movement is controlled in the brain) send out signals of both what to do and how to do it?

Researchers at the McGovern Institute for Brain Research at MIT led by Robert Ajemian designed an experiment to solve this "muscles or movement" question.  They trained adult monkeys to move a video game joystick so that a cursor on a screen would move towards a target.  While the monkeys learned the task, they measured brain activity with functional magnetic resonance imaging (fMRI) to compare the actual movements of the joystick with the firing patterns of neurons.

The researchers then developed a model that allowed them to test hypotheses about the relationship between neuronal activity that they measured in the monkey's motor cortex and the resulting actions.  They concluded that neurons do send both the specific signals to the muscles to make the movement and a goal-oriented instruction set to monitor the success of the movement towards the goal.  Here is a video synopsis of a very similar experiment by Miguel Nicolelis, Professor of Neurobiology at Duke University.

To back this up, Andrew Schwartz, professor of neurobiology at the McGowan Institute for Regenerative Medicine at the University of Pittsburgh School of Medicine, and his team of researchers wanted to isolate the brain signals from the actual muscles and see if the neuron impulses on their own could produce both intent to move and the movement itself.  They taught adult monkeys to feed themselves using a robotic arm while the monkey's own arms were restrained.

Instead, tiny probes the width of a human hair were placed in the monkey's motor cortex to pick up the electrical impulses created by the monkey's neurons.  These signals were then evaluated by software controlling the robotic arm and the resulting movement instructions were carried out.  The monkeys were able to control the arm with their "thoughts" and feed themselves food.  Here's a video of this experiment in action .

"In our research, we've demonstrated a higher level of precision, skill and learning," explained Dr. Schwartz. "The monkey learns by first observing the movement, which activates his brain cells as if he were doing it. It's a lot like sports training, where trainers have athletes first imagine that they are performing the movements they desire."

It seems these "mental maps" of neurons in the motor cortex are the end goal for athletes to achieve the automaticity required to either repeat the same rehearsed motions (like Phelps and Liukin) or to react instantly to a new situation (like May-Treanor and Dan).  Luckily, we can just practice our own automaticity of sitting on the couch and watching in a mesemerized state.