Both the European Food Safety Authority (EFSA) and the U.S. Food and Drug Administration (FDA) have recently released assessments that strongly support the safety of bisphenol A (BPA).

In both cases, a body of studies documenting 1) low exposure, primarily from the diet; 2) efficient metabolism as BPA is absorbed in the gut; and 3) rapid elimination from the body provide key support for the safety conclusions.  In contrast, a recent hypothesis suggests that BPA in food may be absorbed through tissues in the mouth during eating, which would avoid the efficient metabolism that occurs when BPA is absorbed in the gut.

If shown to be valid, this hypothesis might challenge the safety conclusions from EFSA and FDA.  New research to test this hypothesis finds no evidence in support and strong evidence against the validity of the hypothesis.  Accordingly, the results of this new study provide further support for the safety of BPA.

You've been exposed to BPA, but does that matter?

It’s no secret that people are exposed to BPA, a chemical primarily used to make polycarbonate plastic and epoxy resins, both of which are used in a wide array of common consumer products.  But beyond the basic fact that most humans are exposed to BPA, the agreement ends and the controversy starts.

Thanks to the controversy, you might get the impression that little is really known about exposure to BPA.  That’s hardly the case, though, and it might be argued, more plausibly, that little or nothing of importance is unknown.

We know from numerous studies that very low levels of BPA, typically in the low part per billion range, are present in many canned foods and beverages.  The source, known for decades, is the trace level of residual BPA present in epoxy resin-based protective can coatings.

Exposure to BPA has been estimated from food survey data (i.e., how much BPA enters the body through the diet), and quantitatively measured from population-scale urine biomonitoring data (i.e., how much BPA leaves the body in urine).  Since conservative intake estimates from food are generally higher than the measured output in urine, it is widely accepted that the diet is by far the primary source of BPA exposure.  Consistent with this view, no other significant sources of potential exposure have been identified.

We also know from numerous pharmacokinetic studies on rodents, non-human primates, and humans that BPA is efficiently converted to a metabolite with no known biological activity as it is absorbed from the gut and passes through the liver.  The metabolite is then quickly eliminated from the body with a short half-life of only a few hours.  In humans, the metabolite is eliminated entirely in urine.

Much of the controversy arises from small-scale biomonitoring studies that report the presence of significant levels of free (unmetabolized) BPA in human blood.  Other similar studies have not found free BPA in blood, and the combination of exposure and pharmacokinetic data indicate that free BPA should generally not be detectable in human blood.

If the studies reporting free BPA in blood are valid, where did the BPA come from?  One hypothesis that has been advanced involves sublingual absorption of BPA in food that is being eaten.  Since absorption of BPA through tissues in the mouth would bypass the efficient metabolic process that occurs when BPA is absorbed through the gut, sublingual absorption could account for the significant levels of free BPA in human blood reported in some studies.  Important new data, discussed below, sheds light on this hypothesis.

The origin of the hypothesis is a study on anesthetized beagle dogs published in 2013.  In this study, concentrated solutions of BPA were placed under the tongue of the dogs for 10 minutes and absorption of BPA was monitored in blood.

The researchers reported that BPA was sublingually absorbed and resulted in substantially higher levels of free BPA in blood compared to absorption through the gut.  However, due to significant study design limitations, not the least of which are the unrealistic exposure conditions (e.g., concentrated solutions of BPA, long contact time in the mouth), additional experimental evidence is needed to evaluate the implications of this study in dogs for human exposure and health.  For that purpose, my organization recently provided a research grant to the Pacific Northwest National Laboratory.

Such evidence has now been published in a study jointly conducted by researchers at the Pacific Northwest National Laboratory, the U.S. Food and Drug Administration (FDA), and The Ohio State University.  The study involved people exposed to BPA through the diet, which is just the way people are normally exposed to BPA.  Rather than simulate real-life exposure conditions, this study used actual real-life exposure conditions.

Specifically, 10 male volunteers were provided a 12-ounce serving of tomato soup that was spiked with BPA at a dose of 30 micrograms/kg bodyweight.  Although that dose is considerably higher than what would typically be in soup, and higher than typical daily intake to BPA overall, the higher concentration increased the sensitivity of the study to detect any significant sublingual absorption.  To avoid any contamination issues (see below for why this is important), BPA was isotopically labelled with deuterium (i.e., d6-BPA) to distinguish the dose from any other source of BPA to which the volunteers might have been exposed.

After ingestion, the BPA dose was tracked through the volunteers over 24 hours with repeated blood and urine samples.  Consistent with previous studies in humans and laboratory animals, absorption of BPA into the body was rapid and the dose was quantitatively eliminated in urine within 24 hours after ingestion, which confirms that BPA is not stored in the body.  Conversion of BPA to a biologically inactive metabolite was very efficient, with less than 1% of the dose reaching the bloodstream as free BPA. 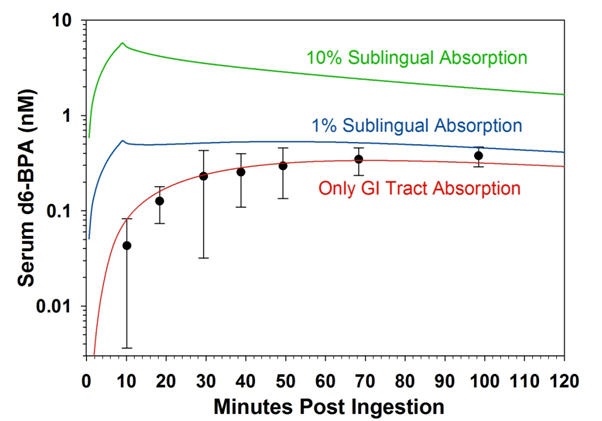 Implications for Human Exposure and Health

The immediate implication of these new results is that BPA is not sublingually absorbed to any significant extent under typical human exposure conditions.  The earlier study reporting sublingual absorption may be relevant to anesthetized dogs, but it is of little relevance for real-life human exposure.  Accordingly, there is no reliable evidence that sublingual absorption could be the source of free BPA in human blood reported in some studies.

More broadly, the new results confirm the findings from previous human pharmacokinetic studies.  In particular, a study from German researchers published in 2002 was the first to demonstrate that BPA is efficiently metabolized and rapidly eliminated from the human body after oral exposure.

That study has been criticized because the analytical method available at the time was not sufficiently sensitive to detect low levels of free BPA that might have been present in blood.  Current analytical methods are now quite a bit more sensitive, and the new study was able to monitor free BPA in blood at extremely low levels.  With that capability, the new results extend the findings from the 2002 study and provide a more complete understanding of the pharmacokinetics of BPA after oral exposure.

In particular, the new study confirmed that less than 1% of an oral dose of BPA reaches the bloodstream in the form of free BPA.  As blood circulates through the liver, that limited amount of BPA was also quickly metabolized and eliminated from the body.  Overall, the results of the two studies are highly consistent and validate the use of the pharmacokinetic data for assessing the safety of BPA.

A more straightforward explanation for the reported levels of free BPA in blood is sample contamination, as has been documented in other studies.  These new results support the growing consensus of biomonitoring and bioanalytical experts that measurement of BPA in human blood is not a reliable method for estimating exposure to BPA, partly because of the potential for sample contamination.

Finally, these new results from the Pacific Northwest National Laboratory provide further support for the recent views of FDA and the European Food Safety Authority on the safety of BPA.  Based on careful analysis of all relevant information, both organizations have concluded that BPA is safe at current exposure levels.