Four Frequently Used Welsh English Words Link Wales To The Rest Of The World
By The Conversation | March 1st 2019 02:00 AM | Print | E-mail

It will likely come as no surprise that the large majority of – if not all – people in Wales can speak English. While Welsh is one of the oldest living languages in Europe, English, along with Flemish, first rooted itself in small enclaves in southwest Wales as far back as the 12th century. By the late medieval period (1250 to 1500 AD), the Welsh Marches (or borders) had a multilingual character, with Anglo-Norman French, Middle English, and Welsh being spoken in towns.

But it was the industrial revolution of the 18th century that created a phenomenal language shift in Wales, one that saw the beginnings of decline in the Welsh language in favor of English. Although for the large part the language shift developed through population movements throughout Wales and the UK, overt government efforts – including language policies like the 1847 Inquiry into the State of Education in Wales (less affectionately known as the Treachery of the Blue Books) – also played their part in placing emphasis on English usage over Welsh.

Ultimately, a new “contact variety” of English developed: Welsh English. Today, you can still hear a lot of the Welsh language influence within this English dialect’s sounds and structure. There’s no shortage of borrowed words in this dialect that have come straight from the Welsh language. Bach (small), cariad (love), and twp (stupid) are just a few. But some of the most commonly known “Welsh” words aren’t Welsh at all. Though they have fast become part of the Welsh English dialectal language, they actually have very different origins. 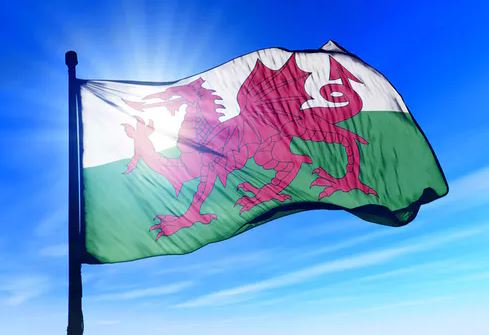 Today, cwtch is arguably one of the most recognized “Welsh” words. Meaning an affectionate cuddle, or a small storage space, it has overtaken “lush” or “tidy” to be the most championed word of Welsh English speakers today.

The word is a perfect example of what sociolinguists call an enregistered word, where the linguistic feature has risen from unconscious obscurity. It has gone from being barely acknowledged, even if it was used frequently, to a point where speakers acknowledge the feature as being unique to themselves, and one that defines the dialect.

It’s become socially enshrined in modern Wales, and yet it is not strictly a Welsh language word. Although it was adopted from the Welsh “cwts” (the noun for both “kennel” and “cuddle”) into Welsh English, cwts found its way into Welsh from the Middle English “couche”, which meant “to put in place”. Where did the English speakers get it from? Well, from the French “coucher”, a descendent of the Latin “collocāre”.

Usually said of cats and children, the sharp word “scram” (to scratch with nails) is the perfect example of the opposite of enregisterment – speakers simply aren’t aware that it is a feature associated with their region.

Scram likely first found its way to Wales through the Flemish Dutch speakers once present throughout the Welsh Marches, who would have used the word “schrammen”, which means to graze. In 1898, Joseph Wright’s English Dialect Dictionary noted a small enclave of usage in the English county of Derby (with Northerners using scram in the sense “to rake”).

The word wasn’t recorded in Harold Orton’s Survey of English Dialects (1950-1961), but when David Parry surveyed Welsh English in his Survey of Anglo-Welsh Dialects (1968-1982), the term was very frequent. It was used through most of south Wales from Swansea to Cardiff, up to Brecon and eastwards towards Tintern.

Referring to a bus or taxi driver as “drive” is something that many associate with modern Welsh English culture, and it is even regarded as a necessity by some to say “Cheers, drive” when alighting a vehicle. This certainly suggests that it’s an enregistered word. However, this linguistic shortening of “driver” also appears to have notable currency in Bristol, with a similar degree of enregisterment.

Sociolinguistically, this is not too surprising. The English city is in close proximity to southern Welsh urban centers, and easily accessible via transport routes. Studies have found dialectal language can “geographically diffuse” to urban locations from further afield, sometimes by these inter-city links, and occasionally unbeknown to one another.

Parry’s 1968-1982 dialect survey first recorded brammer and blemmer being used in urban centers such as Abergavenny and Newport. An adjective meaning fantastic or excellent, it has an appropriately fantastic origin.

The word likely derives from the Hindu god of creation, Brahma. And its adoption may be paired with another term that has been recorded in south Wales in the 1960s – “head sherang” meaning “the boss”, which derives partly from Urdu. Both of these phrases derive from the Indian subcontinent. The most likely explanation for how they ended up in south Wales – and other parts of Britain – points towards the 19th century, when Indian sailors settled in dock towns such as Cardiff. Much like the sailors themselves, a few borrowed words likely hopped ship and nestled within the English-speaking Welsh communities.

By Benjamin A. Jones, PhD Researcher, Swansea University. This article is republished from The Conversation under a Creative Commons license. Read the original article.