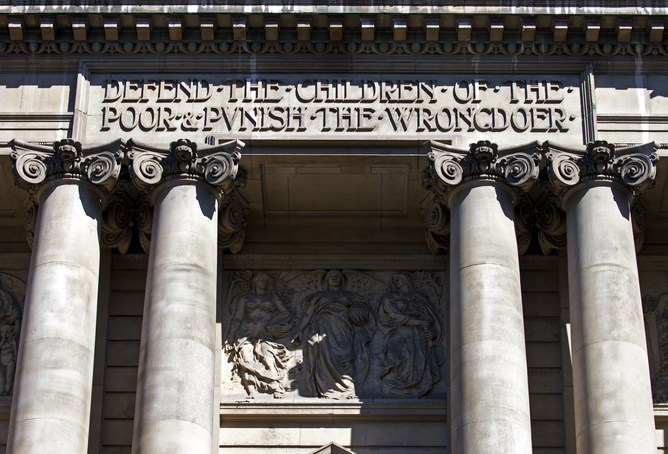 The Old Bailey’s Central Criminal Court is an Edwardian building that bears the inscription “Defend the children of the poor and Punish the wrongdoer.”

An Italian visitor more than 100 years ago suggested it should be replaced with an aphorism from Dante’s Inferno: “Abandon All Hope Ye Who Enter here.”

A sobering thought. And we can eavesdrop on such hopeless cases in a BBC radio show called Voices From The Old Bailey, which is now online for at least a year. The most recent episode dramatized the courageous stand four women took when facing death or transportation for mugging glass-maker Henry Solomons of his hat and loose change in 1788.

It’s a fantastic thing listening to these women. They have new voices, but these are word-for-word transcripts of what was said in that building 226 years ago. It seems incredibly present. The four women make it clear that transportation instead of death was no mercy. Sarah Mills describes that she would prefer to hang by the neck and rot on the gibbet rather than agree to a journey to the other side of the world: “I would rather die than go out of my own country to be devoured by Savages.”

I will tell you what; I am willing to accept of whatever sentence the King passes upon me, but Sarah Storer is innocent, I would not care whatever sentence I went through; I will accept it if that woman’s sentence is mitigated.

Listening to her selfless focus on the justice for her friend is heartrending, and seems overwhelmingly present. The closest you’ll get these days. Elizabeth Cook/PA Archive

I spent 16 years of my life covering every kind of crime in this building between 1981 and 1996: murder, manslaughter and infanticide, sexual crime, organized crime, terrorism, espionage, fraud, corruption, and every other kind of wrongdoing criminalized by the society of the time.

I like to think that I and my fellow court reporters stared the high-mannered, coiffured and Saville Row-dressed ritual of the system in the face. Yet towards the end of this period the British media decided to turn its back on such reporting. National newspapers withdrew their accredited correspondents, news organizations canceled their retainers for contracted reportage – and now you’ll be lucky if more than one or two stories from the Old Bailey emerge each month into a major stream of news coverage.

Part of the problem is censorship and secrecy, wrapped up in a developing culture of public and private privacy. The reason we don’t hear many contemporary voices from the Old Bailey could is also probably due to managerial profit harvesting of news gathering budgets.

But we’re also seeing a bourgeois retreat from satiating sensationalist crime pornography, possibly due to the lack of coverage. However, you can get this in another form in the cases of the past. Voices From The Old Bailey is intelligent and captivating. It’s a radio representation of some of the most interesting cases you can find from The Old Bailey Online’s archive.

While day-to-day reporting from the contemporary Old Bailey is nearly extinct, its historical equivalent is a factual crime-fest gift-wrapped with the pretty ribbons of academic criminological respectability.

Trials of the high and the low as recorded by pamphleteers, ballad singers, and Newgate Chaplains, who would sell the confessions of condemned prisoners on their way to the scaffold, are brought to life.

Professor Amanda Vickery doesn’t sound as though she has been compromised by an Oxbridge background shared with 70% of the present day judiciary. Her raucous chuckle and soft Lancastrian vowels guide a thrilling narrative and intelligent analysis. Amanda and her merry band of cultural historians and criminologists are often on the side of the poor and disadvantaged. They clearly get a kick out of the sensation and near-tabloid frisson of the Georgian “page three” crime stories, but this entertainment is conveyed with historical enlightenment and a genuine sense of humanitarian engagement.

They seem to spend a lot of time meeting and talking in old inns and pubs evocatively selected as location interviews for their associations with nefarious trades such as smuggling or brothel-keeping.

There have been 12 episodes, all focusing on crime and justice in the Georgian London of the 18th century. Cases involving highwayman, children, wicked women and conmen and street brawlers, riots, sexual subcultures and servants are all brought to life. And the question of exactly whom the law was serving is addressed throughout.

Recently, there’s been a dramatization of tragic story of 15-year-old William Chetwynd, indicted for the murder of his 19-year-old friend Thomas Ricketts at a posh school in Soho. The two boys fought over a piece of cake. The weapon was a simple French common knife. Ricketts died the following day, having forgiven his friend. In 2014 such human drama would most likely be suffocated by anonymity and reporting restrictions.

This is a magnificent series. It mixes docudrama and musical ballads of the time with lively “craic” from a free-spirited almost highwaymen and women sensibility of mad academics. I’ve given you only the briefest of tidbits, so make sure you explore it for yourself.

Tim Crook, Reader in Media and Communication (Goldsmiths), Visiting Professor of Broadcast Journalism (Birmingham City University) at Goldsmiths, University of London, does not work for, consult to, own shares in or receive funding from any company or organisation that would benefit from this article, and has no relevant affiliations.