Wind Energy Isn't Just Killing Birds, It's Making Them Change Their Tunes
By The Conversation | December 21st 2018 05:01 AM | Print | E-mail

Wind turbines are a leading source of green energy which could supply 12% of the world’s energy by 2020. But their use is often criticised for its impact on wildlife, particularly birds. Larger birds can collide with turbines and some have even learned to avoid flying near them.

Impacts on smaller birds are less well documented as they tend to maneuver around turbines and can avoid impacting with them much more easily than larger species. My own research showed that birds associated with farmland, including a range of songbirds, were generally unfazed – their winter distribution didn’t change in the presence of turbines.

But there were also some intriguing patterns in the behavior of skylarks in early spring. We noticed their numbers were generally lower close to turbines. I wondered then whether the noise emitted by the turbines might be responsible. 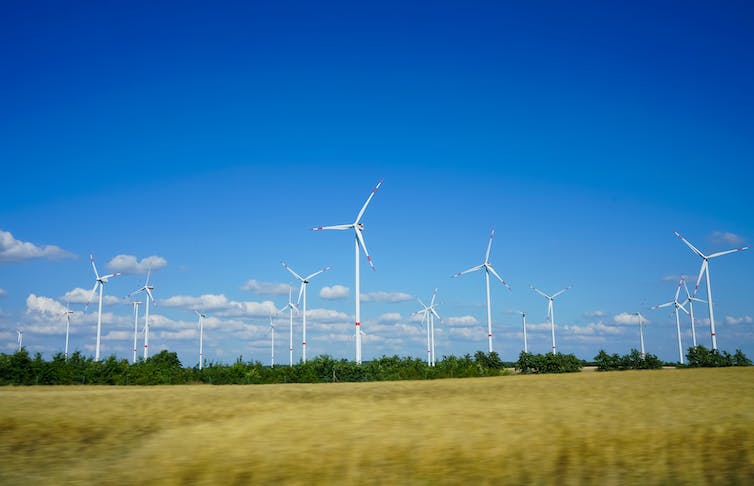 Rural sites are often chosen for wind turbines, bringing them into the habitat of robins and other songbirds. Image: Maradon 333

Much of the evidence for how wind turbines affect birds concerns their distribution patterns around turbines, but we know little about why birds choose to avoid them. The robin, a widespread small bird which lives in rural areas where turbines are common, seemed a perfect candidate to investigate.

Robins are an aggressive but popular species in the UK, having recently been voted the nation’s favourite bird. Males are territorial beyond proportion to their diminutive size. Nevertheless, we subjected territorial male robins to one of three treatments – another robin’s song, a robin’s song with wind turbine noise, and wind turbine noise alone – via a sound recording device inside their territory.

It’s suspected that lower frequency noises make the robin singer “sound” bigger and thus reduce the need for more direct physical encounters to defend their territory. But with the low frequency sound emitted by wind turbines drowning them out, there was a suggestion that robins were having to rely more on puffing out their red chest to deter aggressors. 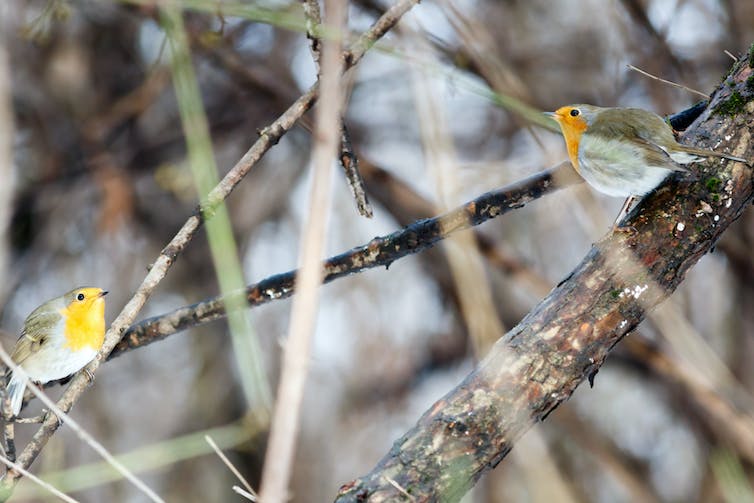 Aggression between territorial male robins is mediated by puffed out red chests when they can’t be heard. Image: Vishnevskiy Vasily

That may be why breeding songbirds, such as the skylark, avoid turbines. Recent work has found breeding bird populations such as the Dupont’s lark, a near-threatened species of songbird found in North Africa and Spain, declined in areas with wind turbines.

The underlying reason may be, at least partially, that birds avoid noisy habitat that makes communication more difficult. Another study looked at the long-term impact of noise from generators in a forest, and showed how it reduced territory quality for ovenbirds, a common warbler with a complex and beautiful song from the Americas.

The impact of wind turbines on birds goes beyond the risk of direct collision or avoidance. Noise emitted from turbines could disrupt their communication and leave them vulnerable. This is particularly troubling when we consider that wind turbines are often located in remote areas, some with high densities of songbirds, such as meadow pipits and skylarks in upland areas of the UK.

Of course, it is important to remember the bigger picture. While wind turbines may harm birds nearby, renewable energy is a vital solution to climate change – perhaps the most pressing threat to biodiversity globally.

Nevertheless, noise pollution from wind turbines should be measured during environmental impact assessments of wind energy projects, to ensure effects on the surrounding wildlife are minimized. That way, the robin and other songbirds might hope for more peaceful Christmases in future.

By Mark Whittingham, Professor of Applied Ecology, Newcastle University. Professor Whittingham has received funding from NERC, BSG Ecology and the World Pheasant Assocation. This article is republished from The Conversation under a Creative Commons license. Read the original article.