Johannes Koelman
In a world where individuals have ranked preferences, it is not possible to create a voting procedure that is guaranteed to yield a fair selection between more than two alternatives. This is a mathematical certainty: in 1951 Nobel laureate Kenneth Arrow gave the mathematical proof.

The key underlying issue is that individuals who have clear ranked preferences ("I prefer apples over bananas and bananas over cherries") tends to result into groups that have cyclic preferences ("we prefer apples over bananas, bananas over cherries, and cherries over apples"). From a game-theoretical point of view, voting is a rock-paper-scissors game (or rather its "twisted" variant) where no single choice leads to a satisfactory outcome.

With the ongoing US presidential elections in mind, Evelyn Lamb reminds us of this fact in a recent Slate article. She touches upon the issue of ending up with unpopular candidates winning major party nominations, and raises the question if this is a manifestation of Arrow's theorem and the cyclic nature of group preferences. However, in her article she leaves this question unanswered.

That's a pity, as the question can be answered. But to do so, we need to specify what we mean by "unpopular nominee".

First observation is that major party nominations can be expected to lead to candidates who are unpopular (attract fewer votes) amongst the electorate of the other party. This is obvious, and we don't need any cyclic group preferences to realize this. 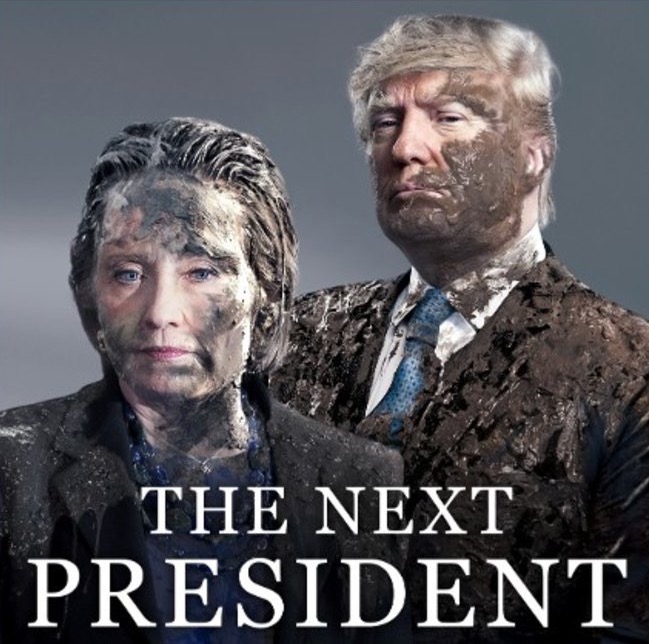 How did we end up in this mess? [Artwork: Der Spiegel]

It should be clear that without any cyclic preferences occurring in the group of voters, a plurality candidate can never become unpopular just by mixing in the nominee of a competing party.

To see this, we need to make things specific. Consider one of two major parties who is making a choice between two candidates for nomination. Let's refer to the party as "GOP" and to the two candidates as "Trump" and "Kasich". [Obviously, all names, characters, and incidents portrayed in this scenario are fictitious. No identification with actual persons (living or deceased) is intended or should be inferred...] And let's refer to the nominee of the other major party as "Clinton". During the GOP nomination process the voters have no hard knowledge that Clinton will turn out to be the opposing nominee, but all GOP voters do have an order of preference amongst the three. This order of preference is assumed not to change between the nominations and the presidential elections.

Under normal circumstances, one would expect two groups of voters: Trump supporters who carry the preference Trump > Kasich > Clinton, and Kasich supporters who prefer Kasich > Trump > Clinton. If the first group is much larger than the second, Trump ends up with a landslide victory over Kasich. The exact numbers are not important, but what is important is that in the subsequent presidential race all GOP voters will prefer Trump over Clinton. The same 100% score GOP support would result if the defeated candidate, Kasich, would have opposed Clinton in the presidential race. According to the above definition, Trump should not be referred to as "unpopular".

With the first group (A) being larger than the two other groups combined (B+C), Trump wins the GOP nomination. However, in the subsequent presidential race Trump acquires the votes from groups A and B only, while Kasich would have attracted the votes of the same groups plus those of group C. According to the above definition Trump can be labeled an unpopular candidate.

This emergence of an unpopular candidate happens because the orderings A and C co-occur in the group of voters. Together they create a cyclic preferences:

Obviously a similar scenario can be dreamed up for the other major party: just imagine next to  Clinton a candidate for nomination under the name "Sanders" and redo the above narrative with Trump in the role of opposing presidential nominee. If there is a group who carry the preference Sanders > Trump > Clinton, cyclicity emerges and Clinton can be labeled an unpopular candidate as well.

So yes, we have to thank Mr. Arrow for the exciting times we live in. In a way.
The hammock physicist
More Articles All Articles
About