The Pattern of Contextual Diminution

This pattern is a bit more involved,as it combines a number of other patterns. It also adds to theself-referential nature of PAC, as it describes the dynamics of anepistemological system, such as PAC.

Remember that the sort-of natural philosophy of PAC presumes that there are no observers in ourlife-world that have an all-encompassing knowledge of everything in that life world: the fundamental limited knowing argument. It is somewhat funny that I have been accused of post-modern sentiments because of this, by scientists who claim not believe in God, but apparently still adhere to the idea of 'universal truths' and'objective observer positions' which stem directly from the ties that science historically has with the Divine, at least in Western science and philosophy. The idea of 'universal limited knowing' is, in my view, the only logical conclusion if one accepts an epistemological system that does not rely on an idea of God. To make myself clear, I am not debating the existence or non-existence of (a) God here, all I am saying is that the current practice of (natural) science does not use the concept of a God to explain things, and this would, I think, mean that every scientific practice should to some extent be 'post-modern', not as an accusation, but as a logical consequence of current scientific thought.

Anyway, this means that we no longer can be searching for 'universal truths' or 'objective scientific facts', without taking in account the limitations of or cognitive tools. Facts then often prove to be the result of democratic or cultural processes, rather than being ontological phenomena, to name only one of a whole philosophical can of worms we open once we start to think through the consequences of this idea of 'fundamental limited knowing'.

The pattern of contextual diminution depicts a practical consequence of this idea. An epistemological system builds on knowledge it receives, and therefore is largely influenced by what it receives from its interactions with its life-world. If this epistemological system -like our brains- also is resource-constrained, then there are forces at work to continuously negotiate an optimal amount of knowledge. Excess knowledge is wasteful, while too limited knowledge may be detrimental, and even potentially dangerous: it is rather smart to know that fluffy ball of fur that is coming closer to you is actually a predator (or not)!

The problem with the resulting dynamics is, that the amount of knowledge that such an epistemological system can store, also depends on what is offered from the interactions with its life-world, or environment. A relatively stable environmentwill therefore stimulate a process where the potential knowledge capacity becomes less, because there are too few stimuli to unleashthe full potential of that epistemological system. On the other hand, a too volatile environment will do exactly the same, as it becomes increasingly impossible to 'make sense' of that environment. With PAC, for instance, the epistemological system consists of patterns, and the rules and processes that allow these patterns to create more complex forms. A pattern, by its nature, does not account for singular events or phenomena -we need complexity thinking for that-, so it is impossible to derive patterns in an environment that is too random to produce such patterns. An environment that is characterised by high amounts a randomness will therefore reduce the amount of patterns that the epistemological system can store or learn. As a result, The epistemological system is optimal in-between stable and volatile environments. This optimal position is further determined by system-internal characteristics, such a the capacity. This relationship is depicted in the pattern of contextual diminution: 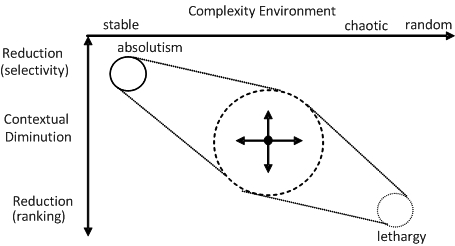 Thepattern shows three circles that represent the content of the epistemological system. On one end there is an absolutist state, which represents the system in stable environments. It is characterised by relatively little, highly specialised knowledge, and tends to be closed for novelty. On the other end there is a lethargic state, which is represented by relatively little knowledge, with an extreme openness for input from the environment. The reason why the resulting circle is small, lies in an inability to process the data. It is the openness of a leaking bucket in the rain: water flows in and out, and meanwhile nothing happens. The middle circle represents the optimal mix where the system is sufficiently open to learn, and sufficiently closed to process the data.

“You should have an open mind, but not so openthat your brains fall out”, I believe Einstein once quipped.

We humans have the ability to change our environment, and usually thereis a strong tendency to stabilise it. Nature becomes a collection of parks, we build houses, roads and a lot of other things to create aless volatile life-world. We also tend to cocoon in our cultures, social groups and like-minded people, as means of organising our individual lives. This results in a pull towards a state of absolutism, and this can lead to a fragile organisation, both individually as at group levels, because the state of absolutism is usually poorly equipped to deal with sudden changes. It works as long as the environment allows it.

For this reason, it is a matter of epistemological health to counter this tendency by being curious about strange ideas that are uncommon, and even challenge those of the epistemological system you happen to inhabit. Therefore it is good practice to include scientific articles from outside a specialisation as cross-reference to the limitations of specialisation. As science goes, this may mean a realisation that we may be more post-modern than we like to believe.