Tommaso Dorigo
Every two years the Biennale, a contemporary art exhibition, opens in Venice from May to November. This is one of the most important events of its kind, and it attract millions of visitors to a garden that contains a few dozen different pavillions, each hosting artwork from a different country. Over fifty more such independent museums are scattered around the city center and are free entry - these are even more fun to visit than the main exposition at the "Giardini della Biennale", as they allow visitors to visit the spaces themselves, often old houses or palaces that are otherwise unaccessible.
Each participating country freely decides what to expose in their space, and the event doubles up as a competition, where the best pavillion receives the coveted "Golden Lion", a prize that goes to the artists who are responsible for the exhibit.
This year I was involved in the event more than usual, because my wife, the soprano Kalliopi Petrou, was selected as one of the performers in an artwork called "Sun&Sea" in the Lithuanian pavillion, which won the golden lion this year! 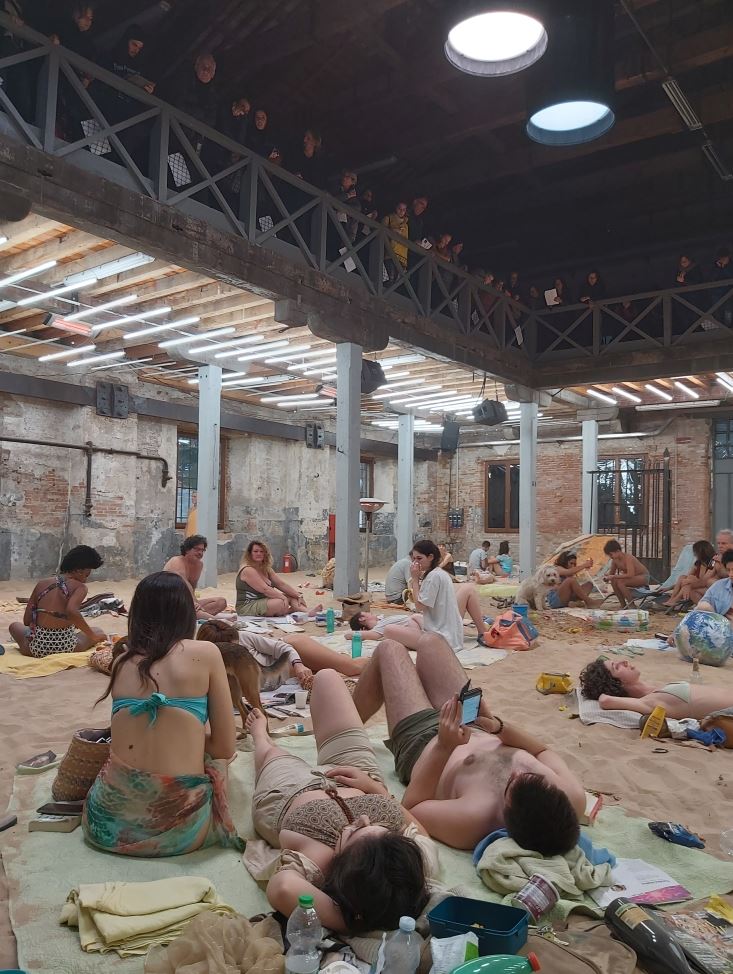 (Above: a view of the set as it looked like yesterday, during the last day of performances).

The opera is set on a beach, where sunbathers lay and take on the typical activities you see taking place in a beach: reading, chatting, playing volleyball, taking care of kids, playing with dogs, playing chess, or just relaxing under the sun. Twelve of the sunbathers sing songs with texts centered on environmental issues, and choirs. The whole performance lasts one full hour, and it is repeated for eight times in a row from 10AM to 6PM. The public sees the scene from atop, as the set is in an old building, once a dormitory for navy personnel; the ground floor is covered by 35 tons of Lithuanian sand, over which the players play and rest over towels and chairs. 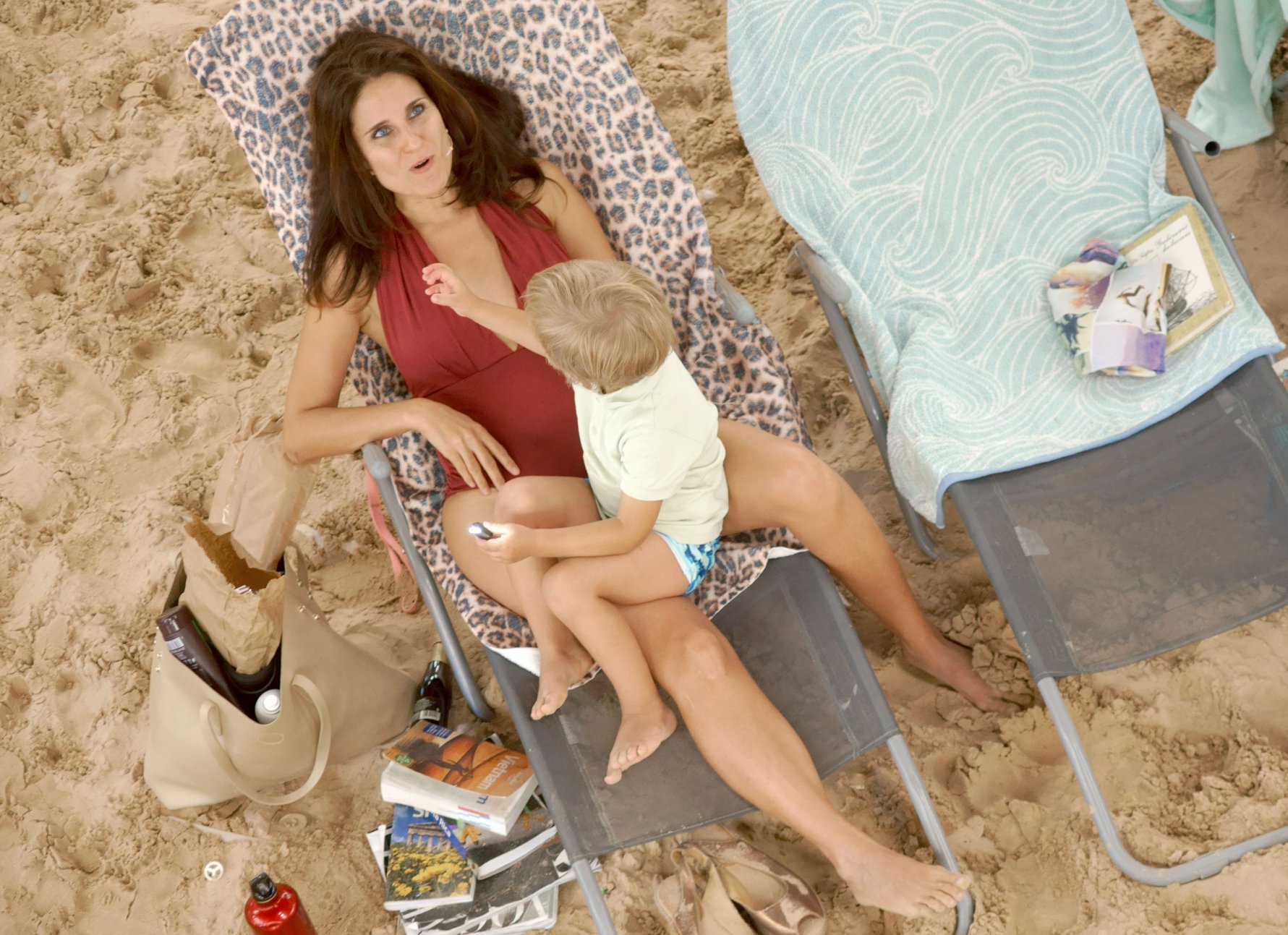 (Above: Kalliopi Petrou acts as the "wealthy mother" in the play).

The Lithuanian pavillion was a real experience to visit, and it attracted over eighty thousand visitors this year. The last day of performance was yesterday, and I decided to take part by playing as a sunbather (the director allowed non-performers to take part in the play by just going to the beach and doing whatever they felt suited the role, although a few rules applied, among which avoiding eye contact with the public, or watching the singers during their performance). Below you can see me playing chess with my wife's husband Bruce (that is, the guy who plays the part of my wife in the play!). Yes, I won that game, as well as all others I played yesterday afternoon with Bruce and with a Lithuanian singer ;-) 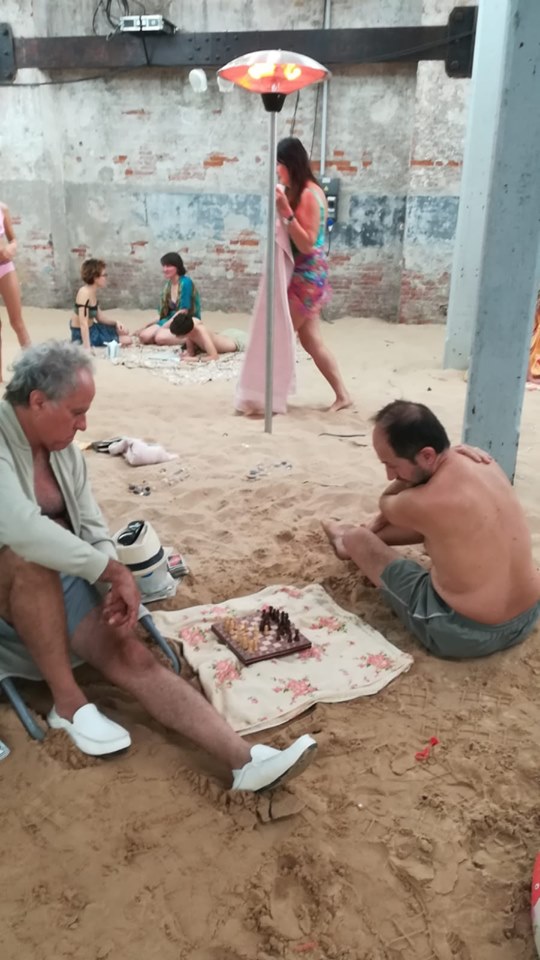 (Bruce and I play a Scotch game)

The installation/performance attracted a lot of interest from newspapers all over the world. Here, for instance, you can read about it in the New York Times, where it is also mentioned that a very annoying barking dog was sometimes interfering with the songs - but that was a wanted feature by the artists! The dog, incidentally, is my very own Papillon dog, Jacques. He was a hired character for the performance, too!