Tommaso Dorigo
When I explain to the public (in this blog, or at public conferences or schools) how the Large Hadron Collider operates, I have to gloss over a lot of detail that is unnecessary to grasp the important concepts, which enable other discussions on interesting subnuclear physics. This is good practice, and it also saves me from having to study details I have forgotten along the way - they say that what you are left with when you forget everything is culture, and I tend to agree. I have a good culture in particle physics and that's all I need to do some science popularization ;-)
One of the things I usually gloss over is the fact that the collisions that produce, say, a Higgs boson or some other interesting particle take place together with a number of other less interesting phenomena, because the protons travel inside the LHC beam line in bunches that contain billions of them. When inside the CMS detector a bunch collides with another bunch coming in the opposite direction, some interesting physics process might be the result of a energetic head-on collision between two protons; but in general many other collisions take place almost simultaneously with that. Typically 40 or so - a number which depends on how densely have the bunches been packed with protons (or, if you want a more technical measure, the instantaneous luminosity at which the collider is running).

So why do I ignore the rest of the story and focus on the single interesting collision I want to describe? Or rather (as the "why" is a bit trivial to guess), how can I do that? If a Higgs boson is produced, it may decay into four muons, so I may want to explain that those four muons provide a clean signature that indicates that a Higgs boson was indeed produced... But what about the other thirtynine collisions: don't they, too, produce muons, Higgs bosons, etcetera?

Well, no, most of the time they do not. The trick is that the kind of processes I discuss are exceedingly rare. When 40 proton pairs hit one another in the center of CMS, the typical outcome is some debris being flown around, but nothing really interesting takes place. Only once every million, or billion collisions (one in three billions, if we are talking about producing a Higgs boson) the magic of a very energetic collision happens. So if you take 40 collisions at random, they are all un-interesting; and if one of them is a Higgs production event, you can bet your salary that the other few tens are nothing special.

"But wait a minute", I could hear somebody object - "the LHC collects gazillions of collisions, so sometimes it should happen that _two_ interesting processes are simultaneously produced, right?"

Yes, that does happen. Let us leave the Higgs boson alone here, and concentrate on W bosons instead. The W boson is interesting enough to warrant the calculation. At the LHC, a W boson gets produced once in a million collisions. So if you collect a million W bosons, one of them on average will have another W boson produced in its vicinity during the same bunch crossing. This is in fact not too interesting - since the two collisions are happening independently of one another, there is nothing special about those rare double W events.

In fact, one might even consider the incoherent production of two W's in the same bunch crossing a nuisance, as these "double W" events need to be discarded in searches for processes that yield correlated W boson pairs, such as, indeed, a Higgs boson decay to W+W- pairs. This is in practice not hard to do, as the bunch length is of three inches, and there is thus plenty of space to distinguish the two collisions along the beam axis, by reconstructing the decay products of each.

Since W boson and Z boson production, and pair production of these particles in the same collision, are interesting probes of electroweak theory, the LHC experiments have been busy determining with high precision the rate of these processes, in fact. Below is a graph that shows how all the different process involving single and pairs of bosons have been measured. The graph is old but I can't be bothered with finding the latest-greatest measurement, as it is only for illustrative purposes... 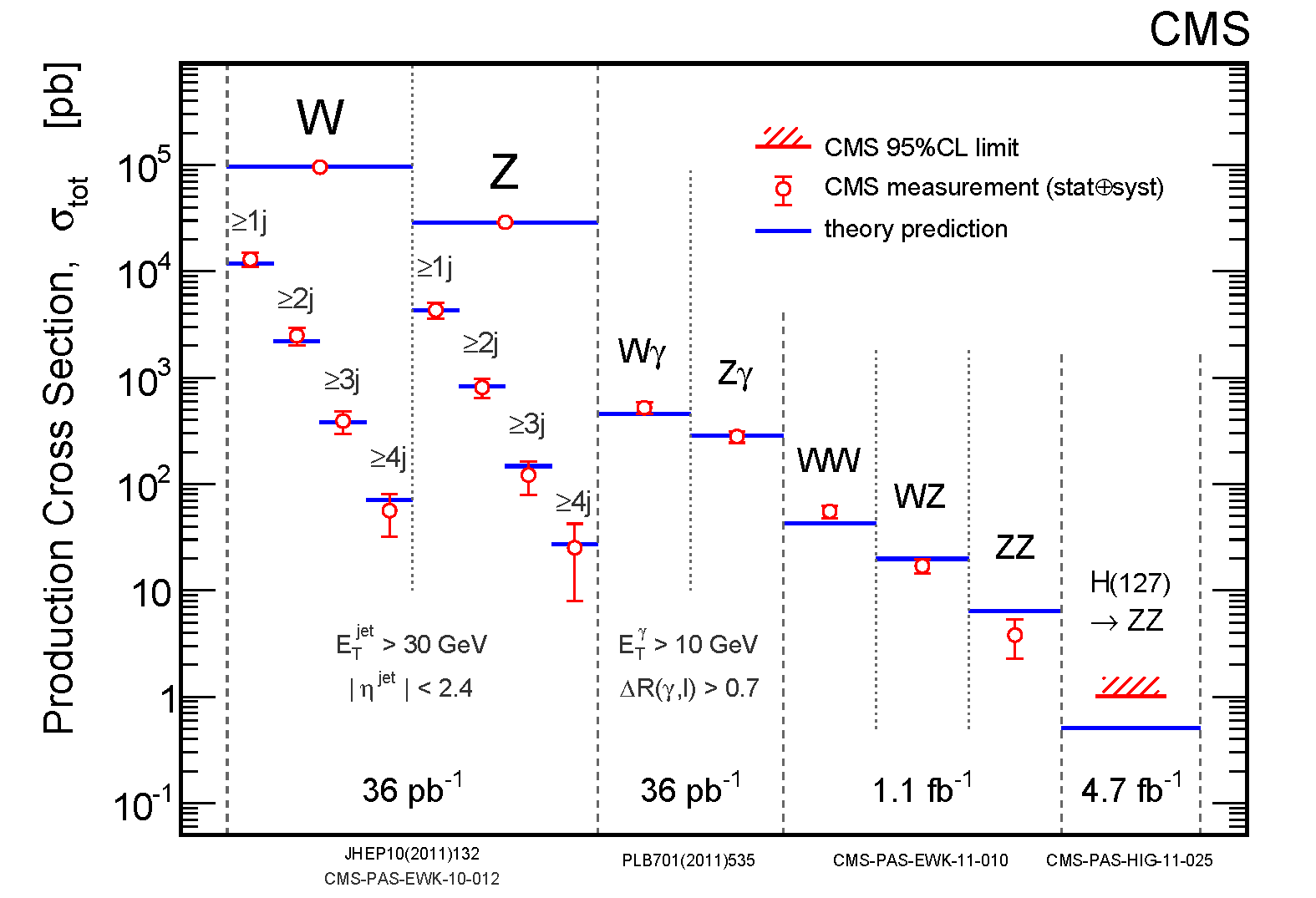 Some explanation of this graph is in order. On the vertical axis you have the production cross section of the different processes, which is basically a rescaled probability - as we said, W production (the leftmost column) takes place once in a million collisions, which is in fact 10^5 picobarns ( a picobarn is 10^-12 barns, and for LHC proton collisions that equates to one in 100 billion collisions). On the various columns you get to see how the probability becomes smaller as you require the presence of more and more complex final states - two bosons of different kinds, e.g., or even a W plus one or more jets (left sub-bins in the W boson bin). Another thing to register is that all measured values (red points with uncertainty bars) are in agreement with predictions. A further note is that this graph was produced in 2011, when the Higgs boson had not been discovered yet - and so the last column, which shows the Higgs decay to a pair of Z bosons, is only showing an upper limit on the cross section!

But there is still another possibility, one which is much more intriguing, for a W pair to emerge from the same proton-proton collision. And this is where we are going with this post today. The proton is very small, indeed, but it is not pointlike. We understand it as a composite object: a bag of quarks and gluons. Let me collectively name them "partons" here. When a proton hits another one there is a significant chance that what happens is not just the hard interaction of a pair of partons, one from each of the projectiles, but rather, two or even more of those pairs.

Again, the chance that two pairs of partons are both extremely energetic, and thus each cause some interesting physics process such as the production of a W boson, is very small. But is there a way to distinguish these "double parton scatterings", anyway?

In fact, double parton scatterings involving the creation of two pairs of hadronic jets, each pair produced by one separate parton-parton scattering within the same proton-proton collision, has been observed for the first time long ago by the CDF experiment at the Fermilab Tevatron. Jets are a much more common result of hadron collisions than are W bosons, so the observation did not require the large amount of data that we now have collected at the LHC.

But now, for the first time CMS has evidenced the production of double W boson production in the same proton-proton collision, due to two separate parton-parton interactions. The analysis involves the use of a multivariate classifier to distinguish the small signal due to double parton scattering from the regular production of a W boson pair. Since a W boson at the LHC can be seen most clearly by identifying its decay to an electron-neutrino or a muon-neutrino pair, the W pair candidates are selected by looking for events with two muons, or two electrons, or a muon and an electron, plus some missing energy due to the neutrinos flying away unseen. We thus have four categories of data, which are displayed in the graph below. 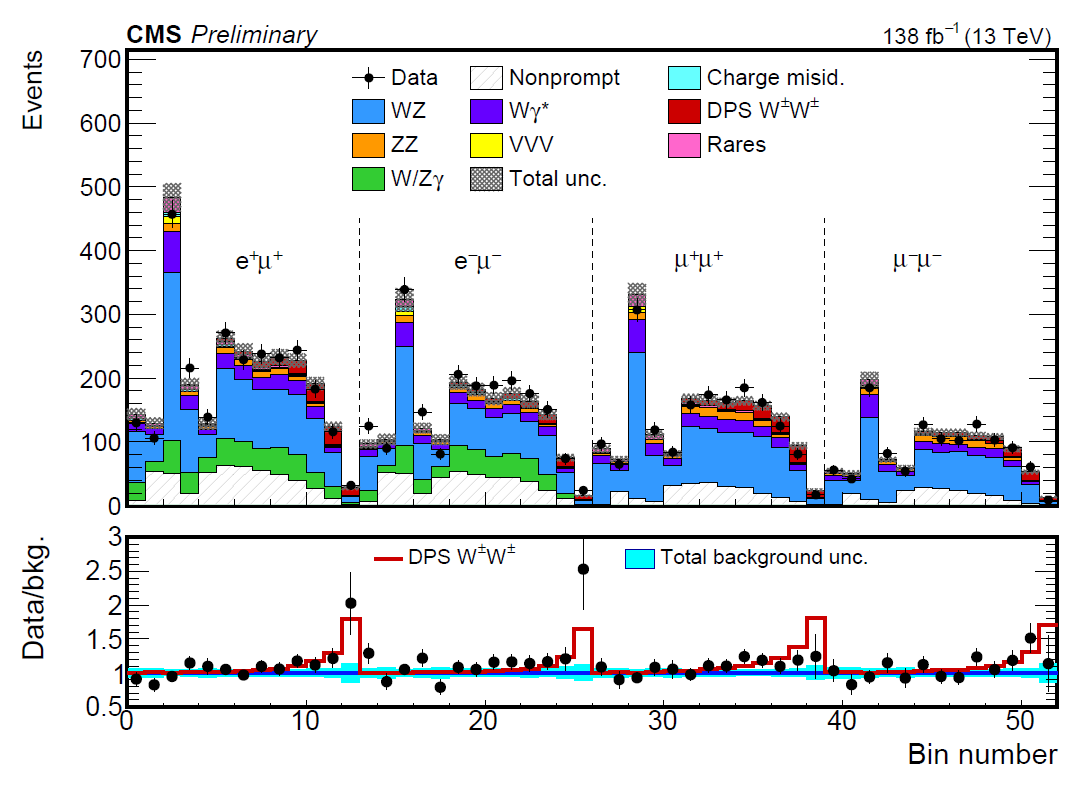 In the graph you can see the distribution of the data (black points) on the four categories of lepton pairs. Because the classifier pushes to the right the signal-like events, the signal of double parton scattering is populating each of the four rightmost bins in the four distributions - and you can not see it unless all backgrounds are subtracted from the distribution (lower panel).

The astute reader will have observed a detail - all four categories involve same-charge lepton pairs. In other words, CMS focused on pairs of W bosons of equal electric charge, because these "same-charge pairs" happen less frequently in single-parton-scattering collisions. In other words, looking for same-charge lepton pairs increases the signal fraction in the data, besides removing Z boson decays (that may otherwise contaminate the dielectron and dimuon subsets).