As physicists are naturally interested in rare processes - there is where you can discover new subtle physical reactions that we did not yet know about - electrons, muons, photons and weak bosons are precious signatures. So much so that in ATLAS and CMS, the two giant experiments that reconstruct the LHC collisions, we typically base our data collection strategy explicitly on the presence of these objects in the final state of the collisions.

While the LHC produces about a billion collisions per second in the core of each of the two competing apparatus, the electronic signals resulting from the reconstruction of produced particle trajectories get stored for only a millionth of them: that is all we can allow ourselves, given our data acquisition pipelines. To do that we rely on a "trigger", an online selection strategy that explicitly privileges the presence of signals that can be interpreted as due to produced electroweak-signalling particles. Such a strategy has paid off very well, allowing us to concentrate our research focus on the electroweak sector of particle interactions. E.g., we discovered the Higgs boson through its decays to electrons, muons, photons, and weak bosons, indeed.

The above does not mean that particles made of quarks and gluons are not interesting, mind you! We do study them, but by and large we do so by detecting their electroweak decays, as these are much easier to sort out of large backgrounds. Again, leptons and weak bosons are our signals, and hadrons (particles made of quarks and gluons) are our background, even when we are looking for hadron decays.

Given all the above, imagine a particle physicist who gets shown events with many leptons at once: two electrons? Twice the fun! Three muons? Wow, that's a keeper! Four electrons? Call the spokesperson! But six muons??? <brain explodes>

Indeed, events with six muons can arise due to the weak decay of three hadrons, but since the probability of decays are independent, it is an exceedingly rare phenomenon. You can see it if you consider hadrons that have a relatively frequent chance of being produced, so that you counter the small decay odds. This is what CMS has done in its recent search for triple J/psi production, and the results are really interesting. Let me explain the hows and the whys below.

The J/psi is a hadron made up by a charm and an anti-charm quark. It is frequently produced in LHC collisions, and even lower-energy accelerators created them at large rates. In fact, as early as in 1969 Lederman and collaborators saw muons coming from J/Psi decays in 30-GeV proton collisions in a fixed target (a beam dump) experiment at Brookhaven; however, their detector was not good enough to prove that the origin of the detected muons was indeed a new particle. The J/Psi had to wait five more years to be discovered, in what was called the "november revolution". Two different laboratories in the US, and a third in Italy, published back to back the observation of events compatible with the decay of a massive new particle whose only possible explanation was that it was due to a bound pair of heavy quarks.

Nowadays we routinely identify J/psi decays to muon pairs. The decay has a probability of only 6%, but it is our best bet, as other decay modes are harder to distinguish from backgrounds; we rely on two well-identified muons at trigger level to save those events. The identified J/Psi events then typically allow us to search for signals of rarer, more massive particles that may have decayed into a J/psi; most notably, hadrons containing bottom quarks. But in the analysis I am reporting on, CMS specifically tried to look for single proton-proton collisions that produced three J/psi particles, by sorting through a large dataset to find events with six muons, three positive-negative charge pairs.

In writing the above sentence I am reminded of a nice limerick:

There was an old fellow of Lyme
that lived with three wives at a time.
When asked "why the third?"
he replied: "One's absurd,
and bigamy, Sir, is a crime."

Indeed, why three J/psi and not two? Well, two J/psi in one event is a lot of fun already, indeed, but we saw that process in previous searches. As I mentioned earlier, we always try to dig deeper and search for rare processes when we can. And the LHC has showered us with lots of data in the past few years. With more data we can look for processes that are comparatively more infrequent. Hence we now look for three J/psi in the same collision.


What do we learn from seeing these events? We learn about the detailed dynamics of proton-proton collisions, because the most frequent processes that produce them are ones where three independent (or semi-independent) pairs of quarks and gluons collide and produce a J/psi. This is called "triple parton scattering".

We typically think at a proton-proton collision as a process where a quark or gluon contained in proton 1 hit heads-on a quark or gluon from proton 2 As a result, the colliding bodies scatter off one another or produce new ones; the rest of the quarks and gluons contained in the two protons then recombine in light hadrons and produce collimated streams that exit the detector along the beam line.

This idea propagates in our outreach lectures, in our undergraduate courses, and so on, but it is an approximation. In fact, the proton is a very complex bag of quarks and gluons, and when two such things collide there often is not only a single collision, but several. Since, however, energetic collisions are very rare, and we characterize the collisions by concentrating our attention on the most energetic components, we tend to neglect all the mess that takes place at lower energy.

The usually low-energy collisions that take place simultaneously with the hardest one are however quite interesting to study - their properties tell us a lot about the inner dynamics of the bags of garbage we call protons. So, if you look for simultaneous production of three J/psi hadrons, and get to observe them, you gain access to a wealth of information.

Some of the diagrams that show ways to produce J/psi triplets are shown below. As you can see, there is a number of them, and these are only the "lowest-order" ones... In the diagrams, time flows from left to right, and gluons are shown by curly lines. You can see how some of the J/psi we can observe are due to the decay of bottom quarks (nonprompt contributions), others are directly produced by gluon interactions. SPS stands for "single parton scattering", and I let you guess what DPS and TPS mean. 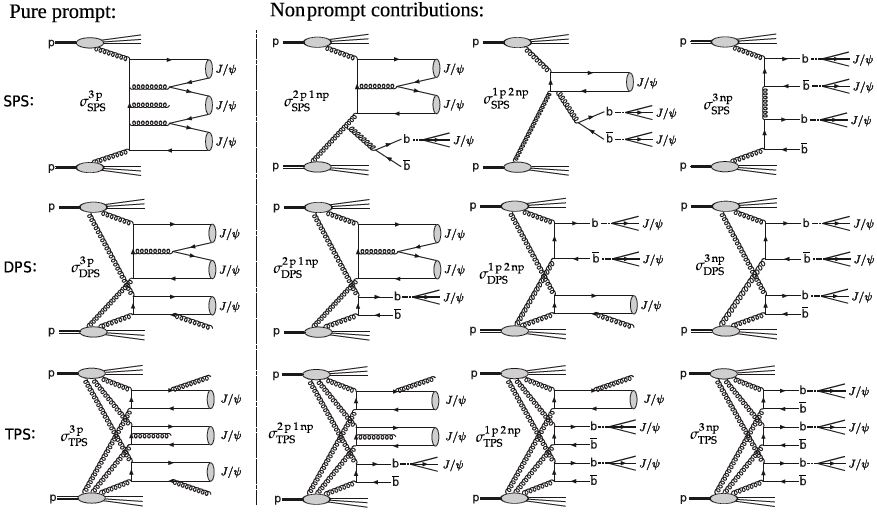 CMS did observe, at over five sigma significance, a production of three J/psi events. The relevant money plots are shown below, where the selected data -a mere 7 events- allow the reconstruction of the invariant mass of the produced hadrons. Seven events from a total of over 10  quadrillion (10,000,000,000,000,000) collisions! Quite a data reduction there.

In the plots above, the data are shown by points with uncertainty bars. Five of the seven selected events all pile up at the correct mass (3.1 GeV, the mass of the J/psi) in the three identified systems (order by increasing value of transverse momentum). I have to say I'm disappointed that CMS forgot that the Garwood intervals (confidence intervals of the maximum likelihood estimate for Poisson-distributed data) for zero observed events should extend to 1.8 events, not 1.2 as displayed here. But that's a small detail, and I am arguably partly at fault myself as, being a member of the CMS Statistics Committee, I should have spotted the inconsistency before the result were made public...

The article that reports all details on the measurement, and the information we gain from the results, is available here. In the future, a larger dataset will allow to shed more light in the complex dynamics of the proton. For now, a clear conclusion is that triple proton scattering is indeed an important process in LHC collisions.