Becky Jungbauer
Rocket science, it isn't: eating at restaurants is typically a more caloric experience than if you prepare foods at home.1

However, the new health care law has a provision that may help customers make more informed choices about the calorie content of their food. The law requires that any restaurant chain with at least 20 outlets post calorie counts for all the food items they sell. This affects about 200,000 restaurants nationwide, WSJ reports. The general idea is that it could help consumers make decisions that will change their behavior and lead to more healthy eating habits.

New York City implemented a menu-labeling requirement in 2008, and many state, county and local regulations across the country have similar plans on the books. The federal law will supersede these regulations.

WSJ reports that calorie counts must be listed on menus, menu boards, drive-through displays and vending machines under the law. Additional information - such as sodium levels, carbohydrates and saturated fats - must be available on request. Temporary specials and custom orders are exempted. 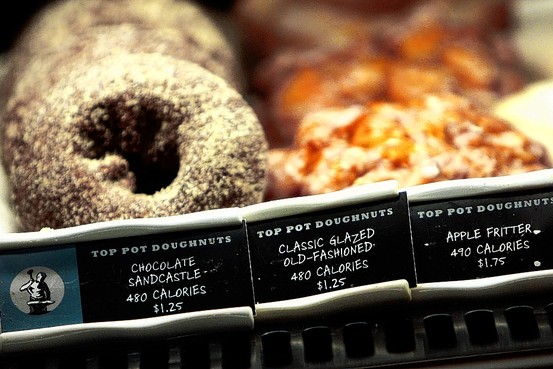 This won't happen overnight - most likely, it will take about three to four years to develop a  labeling proposal, write up the regulations, and implement them nationwide. Interestingly, the National Restaurant Association is behind the regulations because it will "help health-conscious consumers track nutritional facts," and "the law also solved the problem of restaurants having to deal with differing
menu regulations around the country."

Some restaurants are behind the regulations as well: "This isn't telling them what to eat or playing nutritional police - it's about making nutritional information available," said Ron Shaich,
co-founder and chief executive of Panera Bread Co.

But there are critics who say just menu labeling isn't enough to curb obesity. The president of the New Jersey Restaurant Association, Deborah Dowdell, says there are better ways to do that, like exercise education (which is working so very well right now, Ms. Dowdell). A New York City health official said yes, that's true, but when you add it to the layers of public health programs already out there, it can be a big piece of the low-fat pie.

Granted, menu labeling is only as useful as the numbers are accurate - if restaurants under-report calories by 18%, as a study by Tufts University said, this won't be quite as helpful.

I personally think this is a great idea, if restaurants report calories correctly and are routinely checked to ensure accuracy. When I've patronized places that post calories, I do stop and think about my choices. I still remember the first time I learned that my Chipotle burrito was over 1000 calories. Rice, beans, chicken, veggies - how can that be so calorie-dense? However, if there's a particular item I'm craving, even knowing the calories may not stop me. For example, the heavenly Becky-sized deliciousness that is the Sour-Cream Glazed Timbit will be mine - oh yes, it will be mine - regardless of the Timbit-sized fat pouch it leaves on my stomach and hips. But given that I can only get Timbits on rare occasions thanks to its sporadic locations in the northeastern US, this splurge won't break the caloric bank.