Ashley Cox
At a younger age I was completely enthralled with undersea life. Since high school biology, the difference between freshwater anatomy and marine physiology led me conduct some not so nice tests on goldfish. Hey, they were only 10 cents each, plus, I wanted to see if osmosis really worked differently with cells from saltwater fish.   I couldn't just trust the teachers, after all. As I entered a marine biology course, I found marine life to be even more interesting, particularly due to their evolution.

What always interested me was an organism's ability to manipulate it's sex. Most reef fish have the ability to up and switch sex, but why do they? What is the notion behind this act, and does it propose an evolutionary benefit to the survival of it's species? 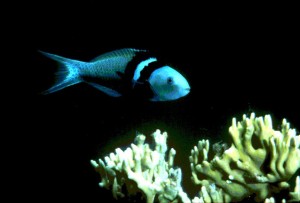 The Blue Head Wrasse photo taken by Kenneth Clifton from the Marine Science Institute.
Although not much is known on the exact genetic or hormonal mechanisms behind the sex change, this change is typically observed in response to environmental cues. When a single sexed member in a school of fish passes away (let's say it was the only male), the largest female will change it's sex to replace the lost fish.  That is of course not the only case of occurrence though, there are multiple ways for sex change to work:


It's often stated that the ability of change is made possible by the endocrine system. The hormones have yet to be identified, and a specific genetic sequence is also yet-unfounded. Environmental factors however, have been sufficiently documented by researchers in the marine field to have contributed to sex change.

"Gender can be surprisingly labile," says Bob Warner, who was  among the first to study sex-changing fish in the 1970s. "The young themselves may develop as one sex or the other, depending on the environment in which they find themselves. And individuals may function first as one sex, then another, over the course of their lives, and the change can be socially controlled."

Socially controlled eh?  I guess peer pressure reaches depths beyond high school then. Dr Philip Munday, of the Centre of Excellence for Coral Reef Studies and the School of Marine and Tropical Biology at James Cook University confirms Warner's findings as well.

He comments on observations, saying "[blue head wrasse] are very sensitive to their social surroundings, which ultimately determine whether they will become male or female. It turns out that social effects are really important to whether a blue head wrasse becomes a male or a female when it is young. This shows that sex is not genetically predetermined, as it is in mammals and birds."

In species such as parrot fish and wrasses, the sexual change is also accompanied by altered coloration. Species in which this occurs are classified by the term dichromatic. Responsible for this change is said to be the Bkm satellite marker,  but supporting research for this has been lacking.

Another factor leading to sex change is from chemical pollution in the waters.  It has been discovered, through many studies, that chemical pollutants from sewage runoff can cause male fish to develop female sex cells, or eggs, in their testes. Exposure to ethinyloestradiol (a chemical found in oral contraceptive pills) can induce a complete gender change in some fish, transforming their testes into ovaries.

"During my research, I made the startling discovery that all 52 species I was studying changed sex at the same relative size and age!"  David Allsop, an evolutionary biologist at the University of Edinburgh, Institute of Cell, Animal&Population Biology.

"I also found that the fish were changing sex at the same age, relative to the age at which they became sexually mature – about two and a half times older than when they reached sexual maturity, changing
sex at a constant proportion when they were about 80% of their maximum body size."

The ability to change gender has been an incredible survival tool for many fishes. When the only sexed fish in the community dies off, another can take his or her place easily. This is very beneficial for species of fish that live in pairs. When one dies, the other does not have to risk leaving the security of the reef and travel in open waters to find a mate, but only has to wait for another fish of the species to come along. If they are the same sex, one will change gender, and they will continue their lives as a pair.

“The relatively low cost of sex change compared to the likely costs  of searching for a mate of the correct sex, appears to explain the evolution  of bi-directional sex change in coral-dwelling gobies,” writes Dr  Munday in the scientific journal Marine Biology.

Self fluctuating gender change allows fish to carry on their species almost infinitely, promising a female to mate with at all times, or a male's ability to promise fertility. Perhaps this is the key that led to the longevity and diversity of marine life even past today's standards.
Variety Tap
More Articles All Articles
About