Ashley Cox
The new discovery of a 2 million year old female pelvis is changing theories about how smart our ancestors really were. The analysis of the Homo erectus pelvis structure (found in Gona, Ethiopia) indicates an increased possibility of neonatal brain size as well as locomotive ability for homeostasis, two opposing aspects in birth that never previously known for that time.

Skeletal remnants below the skull are hard to come by, and therefore scientists have had a tough time conjuring an accurate representation of ancient Homo erectus physiology. A few skeletons have been helpful with these predictions though, including the infamous "Lucy" a 3.2 million year old skeleton of a small female who was also found in Gona, and of another female specimen being 2.5-2.8 million year old. Although these skeletons have enticed knowledge of ancient humans, the finding of a short statured female stumps previous predictions on the neonatal birthing process. 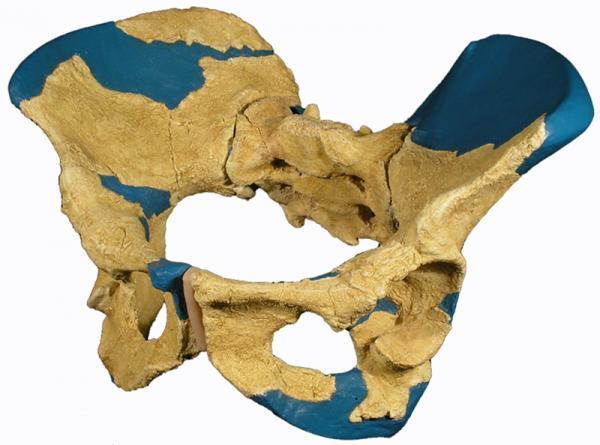 A reconstruction of the 1.2 million-year-old pelvis discovered in 2001 in the Gona Study Area at Afar, Ethiopia, that has led researchers to speculate early man was better equipped than first thought to produce larger-brained babies. The actual fossils remain in Ethiopia. (Credit: Scott W. Simpson, Case Western Reserve University)

Previously based theories of cranial structure came from a 1.53 million year old male found skeleton found in Kenya and are now found to be incorrect. This juvenile fossil showed a constructive basis for narrow-bodied humans, necessary in locomotive effectiveness in open environments. The female pelvis was capable of a uniquely modified ability to birth offspring both large brained and capable of locomotive abilities. This aspect could not have been explored if it weren’t for current findings.

By studying human pelvic identities, there’s a usual connection between birth canal dimensions and neonatal cranial measurements. With observations from the new-found pelvis, scientists have a more accurate basis for H. Erectus physiology predictions and neonatal brain size. Scientists assert the possibility of neonatal cranial measurements to be 318mm, approximately 30% greater than previous predictions that were bases solely on the juvenile male skeleton.

Human beings today have cranial circumferences at birth that are typical in the range of 320-370 millimeters. With the discovery of H. erectus fossil, its suggested that human brain size was nearly the same between now and 3 million years ago. That's not to say multiple changes have not taken place though. A narrowing of the intercetabular distance, a decrease in the degree of illiac flaring and a reduction in the bi-iliac breadth are a few of the differences between modern humans and those of the Pleistocene era.

Does this mean that Neanderthals were as smart as the average man of today? Probably not, but the capability was available for increased knowledge consumption.

Modern humans and H. erectus both also give evidence to a correlation between body shape and the ability to withstand temperatures. Broader torsos are present in beings located within temperate and arctic climates, while those in tropical or semi-arid environments support narrower trunks. Evidence suggests that the short and broad hipped skeleton of H. erectus gives way to a possible theory that they were well adapted to fluctuating temperate climates. It also shows a vague glimpse of the environment at that time. Analysis of carbon levels witin the fossil indicate a semi-arid environment consisting of mainly grasslands and grazing herbivores.

The finding of the 3 million year old female pelvis gives promise for more fundamental information of our Homo erectus ancestors, and gives us a more in depth understanding of modern cranial measurements and in respect to the environment that we are in today.

Its amazing what science can do with fossils... Being able to depic a near exact time frame through carbon dating is one specialty of technological advances, and the ability to determine the rough environment of 3 million years ago is just plain mind blowing. It leads you to think ... maybe scientists in the future will be able to detect climate change from our birthing canals. Maybe, anything is possible I guess.
Variety Tap
More Articles All Articles
About