It may surprise those who know of my Ulster Protestant background that I am something of a fan of Flannery O’Connor.  As yet, I have not delved into her novels, but I have read all her stories, and also Mystery and Manners : Occasional Prose, from which I take the following
quote:

It is generally supposed, and not least by Catholics, that the Catholic who writes fiction is out to use fiction to prove the truth of the Faith, or at the least, to prove the existence of the supernatural.  He may be.  No one certainly can be sure of his low motives except as they suggest themselves in his finished work, but when the finished work suggests that pertinent actions have been fraudulently manipulated or overlooked or smothered, whatever purposes the writer started out with have already been defeated.  What the fiction writer will discover, if he discovers anything at all, is that he himself cannot move or mold reality in the interests of abstract truth.  The writer learns, perhaps more quickly than the reader, to be humble in the face of what-is.  What-is is all he has to do with; the concrete is his medium; and he will realize eventually that fiction can transcend its limitations only by staying within them.

When reading this, I was struck by the phrase “to be humble in the face of what-is”, observing its remarkable similarity to T.H.Huxley’s “humility before the facts.”  I immediately categorized this as “integrity in fiction”, but I have since found that her remarks apply strongly to the history of science.

When I were a lad (and a mammoth sale meant just that) there was a fashion in teaching that in the medieval period everyone thought that the earth was flat, an idea popularized by the Flammarion Woodcut of 1888. 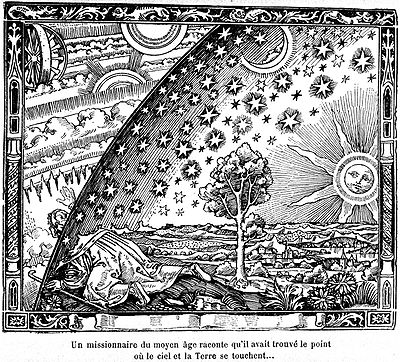 However, looking at Flammarion’s biography, it seems most unlikely that he created this artwork
for propaganda purposes.  But the image has since been propagated as part of the “standard model” of warfare between Christianity and Science.

Those of you who are regular customers of the R.H.Olley Tripeworks[1] may remember that one of my bêtes noires is the play Life of Galileo by Bertolt Brecht.  My personal reason for disliking this play is that for me it proved a major distraction in understanding Galileo’s achievement as the father of modern mechanics; however it is only natural that it should fail the O’Connor test since it was written by a Marxist, for whom truth must be subservient to political purpose.

However, in recently days I took up the challenge of trying to explain to a wider audience the statement “the new hadron might belong to a SU(3) multiplet”.  Now since the founding fathers of quantum theory found group theory had to take on board, this is, a priori, not going to be an easy task.  It requires searching the history of quantum mechanics, and since our University Library is, for the summer, shut outside normal working hours, I have to rely very much on the web.  I found one or two articles which looked promising, but on reading them I found that the
author(s) have an axe to grind, which is somehow to demote quantum mechanics and push their own view that one can really do it all by a new model based on classical physics.

This sounds all very mournful and miserable, so to cheer you all up I will leave you with this little cameo:

Webmaster: Your Holiness, how do you find the new Vatican website?

Pope Urban VIII: Quite swish, actually.  And it seems to be getting a lot of hits.

Webmaster: Yes, your Holiness.  In fact, that’s what I’ve come to see you about.  It’s the Natural Philosophy blog – there are three bloggers called Salviati, Sagredo and Simplicio who seem to be using it to conduct an argument.  They’re putting quite a strain on system resources.

Urban VIII: I’ve noticed that.  It seems that our side is doing rather badly.  Simplicio is certainly not arguing the case well.

Cardinal Bellarmine: Actually, your Holiness, there something quite fishy going on.

Cardinal Bellarmine: Well, your Holiness, I had my suspicions, and ran their contributions through Google Inquisition.  It turns out that all three are working from the same IP address!

[1] for those whose first language is not English, tripe means both “cow’s
stomach in cookery” and “speaking rubbish.”