Are we headed for another 2007 style crash ?

In April I revised that, based on some projections from IARC - IJIS figures to -

I project an end of season extent range between 3.9 million km2 and 4.5 million km2. 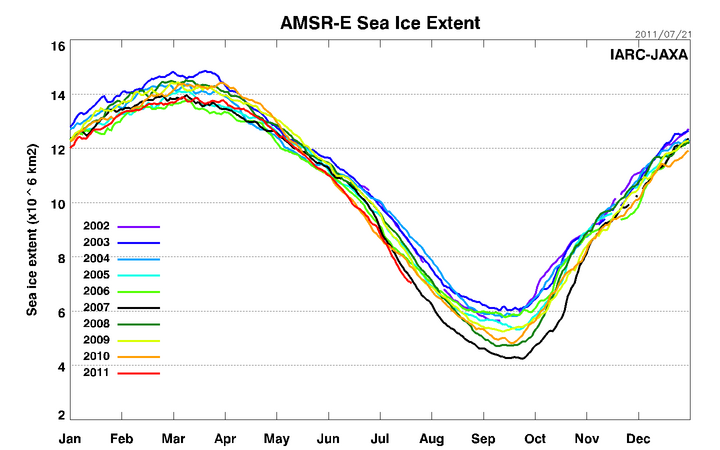 The AMSRE-E graph is currently showing a levelling off.  If that continued then September extent would end up well above the 2010 level.  However, I expect to see another nose-dive.  The reason is that other indications show a continuation of the tendency of 2011 extent to track close to 2007, but with a lower volume.

The above animation shows a dramatic reduction in ice concentration as the Transpolar Drift advects looser ice into the polar area and exports the formerly more compact ice through Fram Strait.  If this trend continues there will soon be substantial open water at the pole.

The two cameras drifting near the pole show evidence of ice decay: in one case the camera has toppled to a sharp angle and in the other case, two surveyors poles have disappeared. 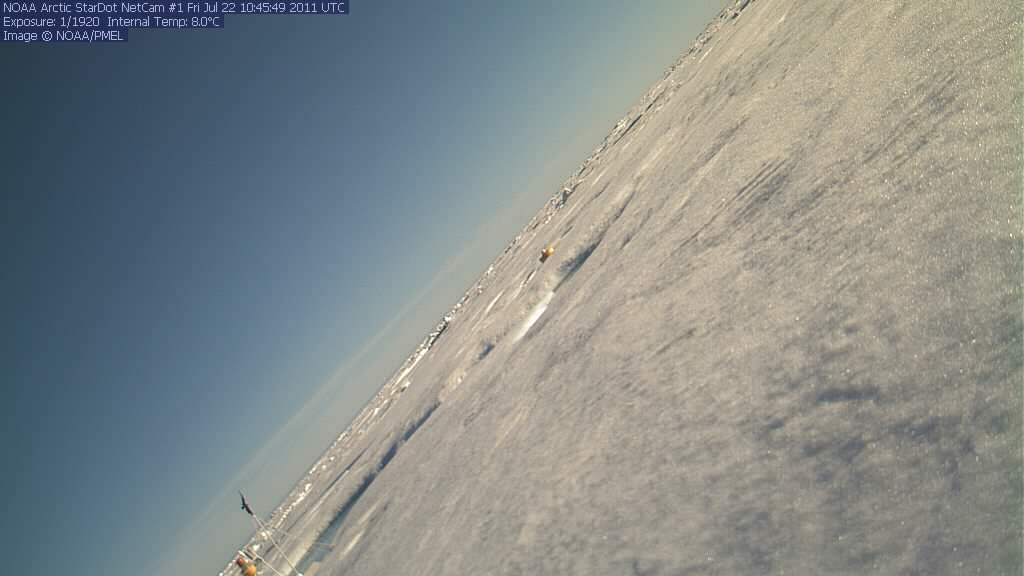 Camera #1 leans over ever further. 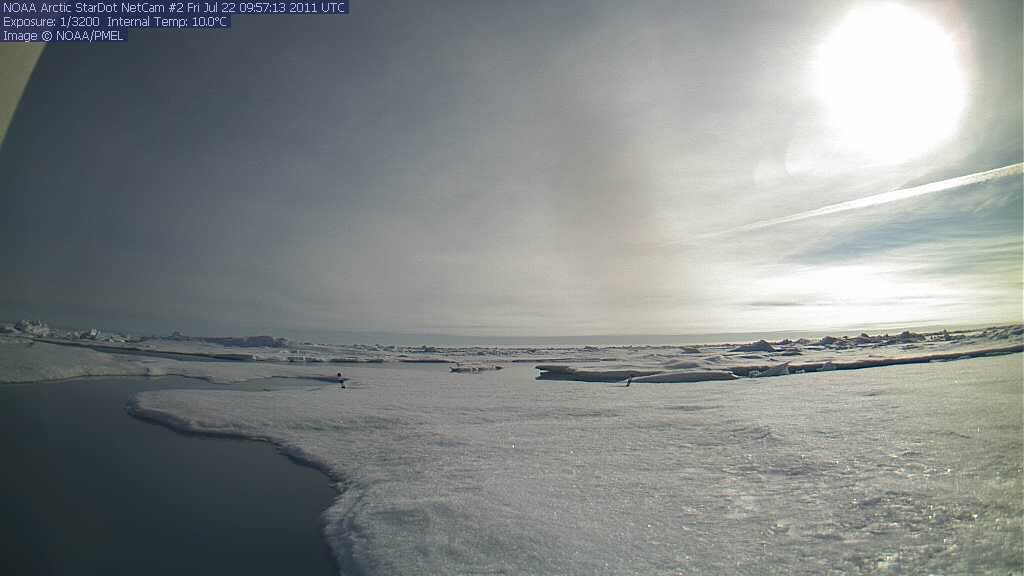 The Cryosphere Today 'Tale of the Tape' continues to show a 2011 trend similar to that of 2007: 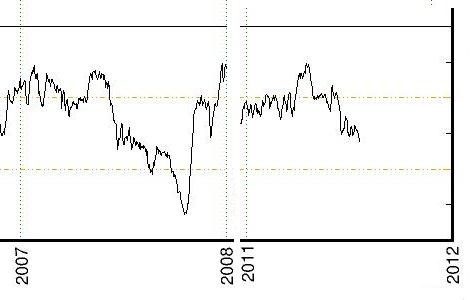 Anomalies for 2007 and 2011 compared
original graphic available from: Cryosphere Today tale of the tape


The ice has now retreated somewhat from where it had remained attached to the Siberian coast, as can be seen - barely - in this Arctic mosaic : 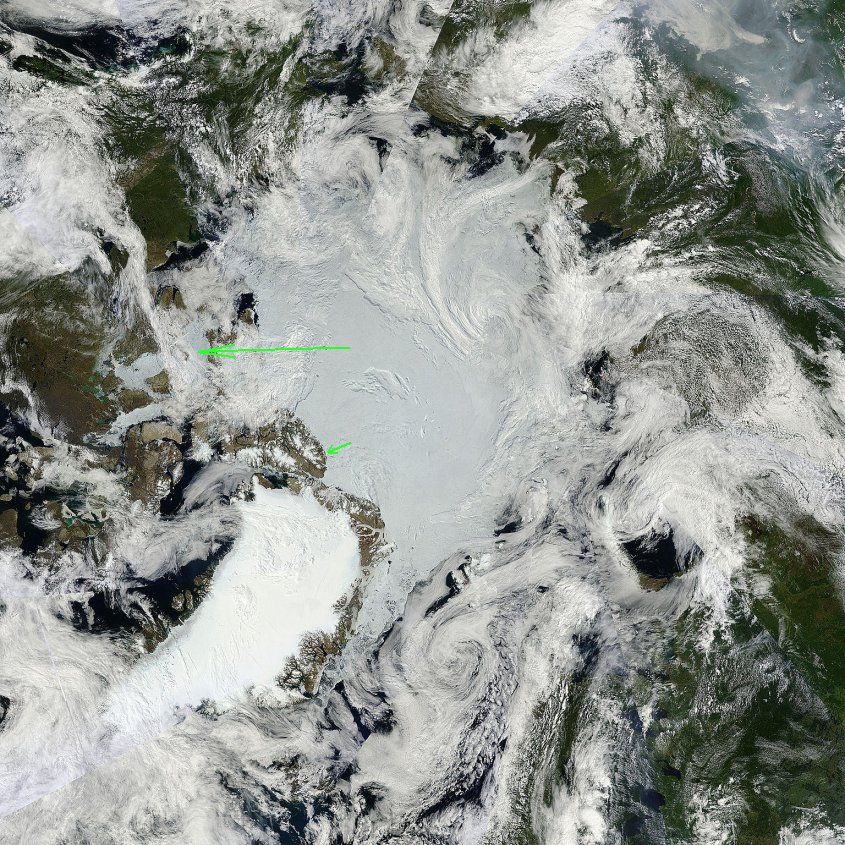 The long arrow indicates the main channel of the North West Passage, which is currently still choked with ice.  That ice will not last long, perhaps another 2 weeks.  It is certainly worth watching, as also the other passages amongst these islands.

The small arrow points to the the last remaining parts of the former very extensive Ellesmere ice shelf.  It would not be surprising to see this ice detach from the coast by August and move into the pack, where it will break up, drift and ultimately vanish.

A the top right of the mosaic there is a lot of smoke.  The many fires in Russia and Siberia are being under-reported in the Russian media and hardly at all in Western media.  The image below shows just how many fires there are currently.  The sizes of the dots are not an indication of the extent of each fire.  Bear in mind that there are many more such fires 'off-screen' at the top right.


The Cryosphere Today web site divides the Arctic seas into regions which I have labeled in the image below, taken from an original on that site : 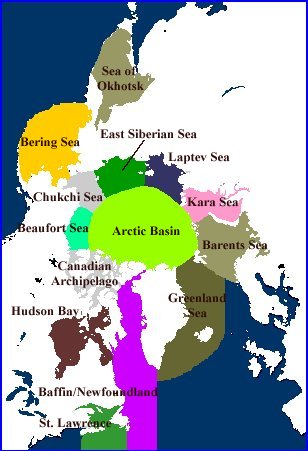 For clarity: when I refer to Arctic ice I am referring to these regions collectively; when I refer to 'the Arctic', I am referring to the Arctic basin, Beaufort, Chukchi, East Siberian, Laptev, Kara and Barents seas collectively.  In this context, if ice remained mainly in 50% of the Arctic Basin, pressed up against the Canadian and Greenland coasts, the pole would see open water and the Arctic as defined by its main coasts would be 'essentially ice free'.  Of course, the Greenland Sea would remain as choked with a stream of ice as it usually is until the Arctic Basin was as ice-free as, e.g. the Barents or Kara seas.

The image below from Cryosphere Today shows ice still obstructing the Eastern Sea Route in 2007 : 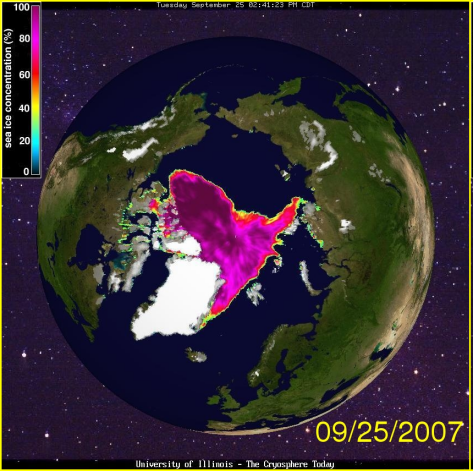 I consider it highly probable that we shall see at least as much open water as this by September 2011, but there will be less ice in the eastern sector and more open water near the pole.

I have recently published part #1 and part #2 of an article on a Swiss pioneer of glaciology and climate change: Ignaz Venetz, an article which I hope may be of interest to my Arctic-watching friends.
The Chatter Box
More Articles All Articles
About