Build a better mousetrap and the world will beat a path to your door.  The metaphor of a better mousetrap suggests that any really useful invention will be eagerly adopted. In this series of articles I trace a history of invention and discovery which shows that resistance is more likely than acceptance, even for proven life-saving inventions and facilities. 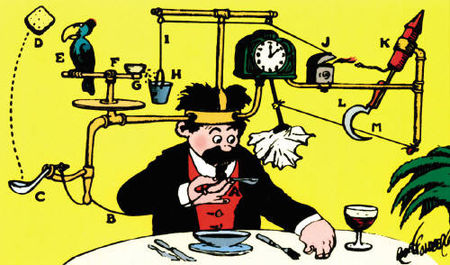 The history of invention and discovery shows that many of the things taken for granted by one generation were vigorously opposed by people of a previous generation, especially those who had a personal investment of intellectual or material capital.  Adoption of new ideas has also been opposed where the science has not been generally understood. The unscientific claim that we should "wait until all the facts are in" is not new to this generation.  Regardless of the utility of a new idea, history shows us that people generally prefer stability in their lives and tend to react against change.  And then there are  bureaucrats, self-appointed "experts" and propagandists.

The scientific truth is plain to anyone who has studied the history of the adoption of scientific discoveries and technological advances: the mousetrap metaphor is a myth.

The calendar mandated by Julius Caesar in 45 BC remained in use throughout most of Europe for many centuries.  During those centuries there was a drift of the seasons amounting to about ten days.  In 1582 Pope Gregory XIII, on expert advice, adopted a new calendar.  The world, far from beating a path to the Pope's door, resisted the adoption of this novelty.  The Gregorian calendar was adopted over the course of centuries.  Greece was the last European country to adopt it, in 1923.  This is a far cry from beating a path to the Pope's door.

Prior to 1840 there was no legal standard of regional time in much of the world.  Clocks were set to local solar time.  Today we adjust our watches and clocks when we travel from country to country.  Before the growth of the railways, people had to allow for time changes between towns.  It was the Great Western Railway which introduced standard time to Britain, for the safety of its operations and the convenience of passengers.  That was in 1840.  It was not until 1880 that Parliament finally adopted into law the 'better mousetrap' of 1840.  Even then, the law was enacted only to standardize the meaning of statements about time when used for official purposes.  There was no requirement for private citizens or industry to adopt the new time standards.  It took many decades for the world to beat a path to the Great Western Railway's door.

Whenever any expression of time occurs in any Act of Parliament, deed, or other legal instrument, the time referred shall, unless it is otherwise specifically stated, be held in the case of Great Britain to be Greenwich mean time, and in the case of Ireland, Dublin mean time.

I should perhaps mention in passing that there had been considerable opposition to the building of railways.  Who needs a 'better mousetrap' when the canals are performing such excellent public service?

Mr. F. Wilson opposed the [Leeds and Selby Railway] bill, as involving an attack upon the interest of the proprietors of the Aire and Calder navigation.

Mr. Sykes supported the bill. The intended railway would be of the greatest public benefit. He was not surprised at the opposition of the hon. Member for York, who received dividends to the amount of £10,000 a year out of the Aire and Calder navigation, ...

Mr. Robert Palmer [said] ... It appeared also, from the evidence, that of the proprietors of the soil through which the [Great Western] rail-way was proposed to run, those who possessed by far the greater portion were hostile to the project. It was shown, that out of twenty miles of the line the landed proprietors to whom two miles belonged assented to the rail-road, those dissenting possessed fifteen miles, and the neutrals, three miles.

Who could argue against the provision of harbors of refuge for a nation which depends on sea cargoes for its life?  A petty bureaucrat, naturally.  Never mind the lives, ships and cargoes lost for want of a port in a storm: officialdom knows best.

The Parliamentary debate of April 26 1864 affords a very good illustration of a propaganda method only too common in our times: the fake expert.  Arranged on one side were experts in whose opinion harbors of refuge should be constructed.  On the other side was an anonymous bureaucrat who wanted to redefine those perils of the sea from which safe refuge might properly be sought.

In connection with the subject it was impossible to pass over a paper from the Board of Trade which had been laid upon the table of the House. ... The document was meant to guide the opinion of Members of the House, and to answer the deliberate Resolution of the Committee, of the Commission, and the Vote of the House; and when a document of that kind was laid before the House, it ought to be correct as to its facts; it ought to lay before them statements which no one could doubt; but he was sorry to say that this document was calculated to lead hon. Members astray. For his part, he thought the deliberate convictions of Parliamentary Committees and Royal Commissions, formed upon full information, and backed by the vote of a majority in a full House, were entitled to more respect than a document concocted at the Board of Trade by any gentleman, however competent.  ... Now, who were the persons against whom that single gentleman at the Board of Trade set up his opinion? Admiral Hope, ... Admiral Washington, ... Captain Veitch, ... Mr. John Coode, ... Sir Frederic Smith ... might not the view of these five gentlemen be adopted against that of an unseen clerk of the Board of Trade?

...
In the paper emanating from the Board of Trade every vessel was struck out of the account which was not lost in a gale of wind. An attempt was made to measure the strength of gales, and it was contended that because in one, of which the violence was indicated by the figure 9, a vessel could carry close reefed topsails, she would have no right to seek a harbour of refuge, ... the paper eliminated all collisions from the account. ... It also eliminated all vessels which foundered at sea. ... Another deduction was made on account of losses attributable to bad seamanship. Bad seamanship! Did they not know that the coasting trade trained the best seamen that England had ever possessed, and how could the author of this document judge whether or not a vessel had been lost by bad seamanship when the crew had all perished? He would not trouble the House further with the document, but would pass on to the real facts of the case.

To be continued ...
The Chatter Box
More Articles All Articles
About