Modern tissue engineering techniques could enable the development and production of meat grown, or ‘cultured’, in the lab. This research into in vitro meat (see figure 1 for an example) has its roots in experiments conducted by NASA, and since then, the idea has slowly trickled into the focus of other research groups (at the moment, the main hubs of activity appear to universities in the Netherlands). But even as early as 1930, Churchill has said:

Fifty years hence, we shall escape the absurdity of growing a whole chicken in order to eat the breast or wing, by growing these parts separately under a suitable medium. 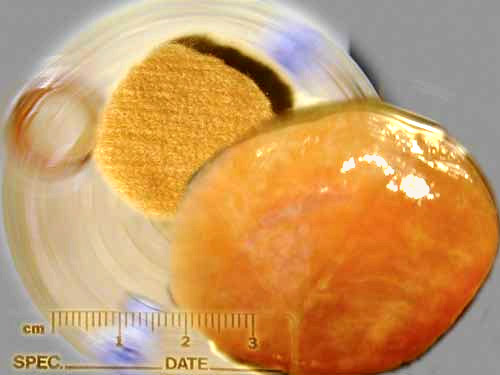 As of yet, the techniques to produce in vitro meat are still being refined (and are currently very expensive), and, as such, there are still questions about it, ranging from health to economic impact. The idea, however, is strongly supported by animal welfare groups (no surprise there) and the two most often heard major arguments in favor of it are (1) the ability to feed the increasing global population, and (2) a decrease in the environmental impact of meat production.

Scientists of Oxford University and the University of Amsterdam have performed an analysis in order to check whether the second argument makes sense. The calculations were based on a process that uses Cyanobacteria hydrolysate as nutrient and energy source to grow muscle cells. When compared to the production of regular meat, it was estimated that the lab-grown meat would result in a decrease of 7 – 45% of energy use, 78 – 96% lower greenhouse gas emissions,  82 – 96% lower water use, depending on the type of meat, and 99% lower land use (see figure 2).

And these might be conservative estimates, as the calculations did not include the lower energy costs of transportation and refrigeration, as well as the potential reforestation of the land that could be freed up for carbon sequestration. In the words of one of the authors:

We are not saying that we could, or would necessarily want to, replace conventional meat with its cultured counterpart right now, however, our research shows that cultured meat could be part of the solution to feeding the world's growing population and at the same time cutting emissions and saving both energy and water. Simply put, cultured meat is, potentially, a much more efficient and environmentally-friendly way of putting meat on the table.

Of course, further research has to figure out whether lab-grown meat is as good as (or better than) regularly produced meat in terms of health risks and nutritional value. And even then, people would have to be prepared to eat it. The ‘yuck-factor’ can be quite persistent.

Would you be prepared to eat lab-grown meat?