Johannes Koelman
“Room for one please!”

Josef was impatient. He was tired. It had been a long hot day and he needed a bath.

“Of course sir. How many nights?”

“Twenty-one nights, I will be leaving the same day in three weeks time.”

Josef listened to the rattling of the keyboard. This young man was quick and seemed experienced. 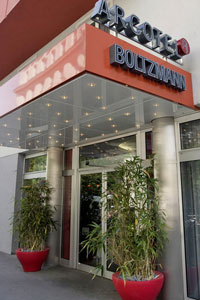 The clerk handed over a key card. “You have room 13 sir, it is indicated in binary on your smartkey card. The number of bits on the card indicates the floor number, tonight you will be on the fourth floor.”

Josef looked at his keycard. It had a small LCD display showing the four characters '1101'.

The clerk continued: “Each day you will be moving to a higher numbered room at a higher floor. The smartkey card is programmed to switch over to your new room number every day at 10:00 AM. At any given time, the keycard will give access to the room indicated on the display and that room only. Each day the bellboy will be at your room 9:55 AM exactly and take care of your luggage.”

Josef looked again at his keycard. Digital gadgets and impersonal automated procedures, he hated every bit of it! “Give me a room I can stay at the full twenty nights, I don't want to move.”

“Sorry sir, this is impossible. All our guests have to move according to protocol.”

“Are you saying that the next three weeks each day I have to move up to a higher floor?”

“This is ridiculous! Put me in a room at a lower floor.”

“Sir, I have no rooms available at lower levels.”

“Then put me in a room such that I will move down during my stay.”

“Sir, such rooms do not exist.”

Josef's irritation grew. “What is your name young man?”

“Listen Ludwig. If there are guests in this hotel who have to move up to higher room numbers, than surely there are also guests that move down to lower numbers. Stop kidding me and give me a keycard that allows me to move to lower floors.”

“I apologize sir, but this is impossible. According to the H-theorem each and every day the majority of the guests move up in room number. None of our long-stay guests can avoid moving up.”

Josef stared angrily at the young man behind the desk. Was he trying to exercise a practical joke? It didn't look like that. The clerk was getting visibly nervous. Despite his growing anger, Josef became curious.

“What theorem are you talking about young man?”

“The theorem on the Hotel-room-number sizes, sir. A cumbersome name for a simple theorem, I usually call it the H-theorem. It is actually easy to demonstrate that when you keep moving the guests in a sufficiently large hotel according to a fixed protocol, then these guests keep going to higher and higher room numbers. In the long run, room numbers can only grow in size, and the number of bits required to identify the location of each guest will keep increasing.”

“That was my initial tought as well sir. But it does seem to be correct. If you look at the daily movements averaged over all guest, than the room numbers increase in length by a quarter of a bit. Every four days, the average guest gets a bit added to his room number and moves up a floor.”

“Ha, that means that the lower levels get vacated. So you must be able to give me a lower level room!”

“I beg you pardon Sir, but that is incorrect. The lower floors stay fully occupied.”

“Who are you kidding boy?”

“Sir, I do apologize for the inconvenience, but I can not avoid you moving up to higher floors.”

Josef was puzzled. Surely this clerk was trying to fool him. What he wanted him to believe was simply preposterous. Yet, the boy certainly was not enjoying himself. The young man avoided his stare and looked down to his keyboard. A droplet trickled down his left cheek.

Then a thought occurred to Josef: “Listen young man, I am certain that what you are telling me is logically impossible. But for sake of argument, suppose you are right. Suppose that you got some room movement scheme working here that causes guests to move to higher numbered rooms. Then I propose that you simply reverse these movements. The guests will then move down!”

The clerk was silent for a moment. Josef looked at him with a triumphant smile on his face.

“Sir, I am very sorry. We indeed can reverse all the movements, but even if we do so, still the majority of the guests will move to higher numbered rooms.”

Josef's mouth opened. He wanted to say something, but instead he had to gasp for breath. A silence followed. Josef kept his eyes fixed at the young man opposite him.

“Sir, please. I can show you the movement scheme and you can judge for yourself. Here it is...”

The boy handed over a small piece of paper. His hand trembled. “Sir, you can take any room number as starting point, and do the calculations yourself. You might occasionally observe a few reductions in the number of bits in the room numbers, but invariably an expansion will set in and the room numbers will continue to grow.”

With the higher numbered rooms on the higher floors, each day the majority of your guests will enjoy a better view from their room!

If preferred, the room movements can be reversed. This is achieved in above scheme by changing every '1' in a '0' and vice versa:

This does not change the statistics of the size increases of the room numbers.

Josef kept staring at the piece of paper. He read it, and read it again. Finally Josef looked up, and broke the silence. “Young man... how many rooms does this hotel have?”

Ludwig looked up. A smile spread across his face. “Sir, it might surprise you, but my friend Georg - who is studying math - assures me this hotel has vastly fewer rooms than there are points in even the tiniest line segment.”

Ludwig hesitated, and then continued: “Personally, I don't think the rooms in this hotel outnumber the stars in our universe. That suffices for a contraction followed by an unbounded expansion. Come to think of it, it could very well be that the universe follows a similar protocol."