Hank Campbell
Robert F. Kennedy, Jr. The NYU Arthur L. Carter Journalism Institute, Berkeley psychologist Joel Moskowitz, and other anti-science conspiracy theorists use the language of science against it to advance their beliefs that we're all being harmed by the modern world.

So when they see a scientific statement like "very low risk" of harm from any cell phone service, including 5G, they have a ready retort to mobilize the coastal Karens and Darrens who make up their ranks; that's not no risk.

There is no such thing as no risk in the language of science, but in common parlance there is, and 5G cell service meets it. Unless you think the light from the candles someone you know learned to make during the coronavirus pandemic is giving you cancer.

People can worry about cell phones and non-ionizing radiation(!) because we are safer than ever from early mortality due to war, disease, starvation, and everything nature used to throw at us. Coronavirus was a reminder how bad things used to be. The entire San Francisco metropolitan area is wearing masks today when just a few years ago they had schools with vaccination rates under 30 percent. They didn't think infectious disease was a problem but believed vaccines caused autism. Now they want science.

If I add up the 'virtual' lives that would be saved by banning every product activists claim is killing us, we'd not only have no deaths, we'd have spontaneous generation of new humans. Yet we know that is not true. For example, one paper claims 200 lives were saved because coronavirus effectively drove airlines out of business. How did they derive that? They simply accepted bizarre epidemiology claims that try to argue "vritual" pollution is killing us - at least when, according to other activist epidemiologists it isn't giving us a lower IQ or causing obesity.

We're actually safer than ever

Obviously pollution that can only be detected with an electron microscope is not causing any harm, we just couldn't detect it in the past. Ignoring science, activists placed inside EPA tried for a decade to not only claim it does cause harm, but blocked anyone else from seeing thei underlying data behind the claim. The reason activist epidemiologists can now correlate so many things to so many other things is that our definition of zero has changed.

Just like scientists refuse to use the word impossible even when they know something is impossible, it is difficult to have zero exposure to anything. Sixty year ago, anything under parts per million was effectively zero. So it was called that. Now we can detect parts per quadrillion in water, so we can literally detect anything in anything. Zero has ceased to exist which has allowed activists to take a chemical or product harmful at obscene levels and claim that because it is detectable it might be harmful at any dose. That is homeopathy - magic - not toxicology.

Does that mean the modern world is more risky? No, we were always exposed to trace chemicals and pathogens, just like we were always exposed to coronavirus and flu. If cell phones, which are obviously newer than the cold virus or natural estrogen in foods, cause cancer, the psychologists, lawyers, and journalists promoting it should be able to answer one four-word question; where are the bodies?

There aren't any. Zero. And the IEEE Committee on Man and Radiation wrting in Health Physics: The Radiation Safety Journal shows it is because that is impossible. They just refuse to speak plainly and say there is no risk when they know there is no risk. And that is what allows the language of science to be used against scientists by activists who prey on emotion. 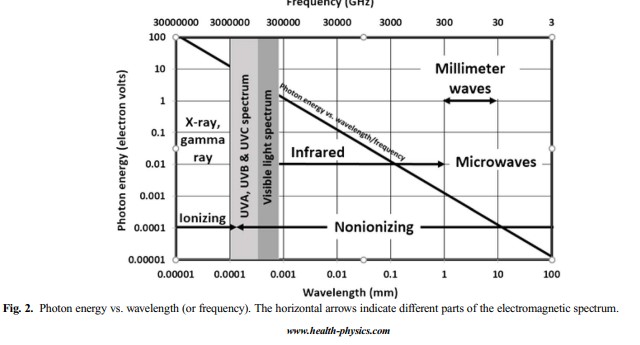 The physics is why there is no risk. First, this is non-ionizing radiation. While "radiation" is a bad word to environmentalists - they even got President Clinton to drive nuclear energy out of the US in 1994, depriving the world of the same brilliant breakthroughs in energy that gave us smartphones - there is a difference between ionizing radiation, like high-energy cosmic rays that naturally mutate plants, and non-ionizing radiation, such as what we know as visible light.

Second, is that this will mean less energy than existing wireless, which we know does not cause cancer. 5G uses the radio spectrum for phone calls, as an example. Who is being killed by radio and TV signals that are beaming into us every day? Not one person but that doesn't prevent a few who don't understand physics from lining their hats with aluminum foil. Depending on the application it can use a broad 30-300 GHz millimeter wave spectrum, like your car uses to detect a potential collision. Because this can be done for many people using many different devices all at once, its actual energy is lower than current wireless.

The higher frequency of 5G seems to worry some but that leads us to out third physics reason for no concern; activists misunderstand how wavelength works. There is a reason the Navy will use extremely low frequency (ELF) bandwidth - it can penetrate a half mile of water.  But its data is very limited. The millimeter wave is the opposite. It can pack in a lot more information, but its actual energy is low. That is why you will need mini-towers in more places. If you think of your home wi-fi, it is why you probably don't use the 5 Gigahertz band for your tablet unless you are in the same room as the router. 2.4Ghz will be slower but can go through walls better.

The good news: No one is buying that this is a problem anyway

I can lament that more scientists won't speak plainly and use a word like "impossible" when something is impossible, but in this case no one is panicking anyway.

If there was real concern that manufactured 5G hysteria was going to catch on, the first thing that trade groups for cellular companies would do is call us. We're a pro-science consumer advocacy group, we separate hype from hysteria, donors give us money to do that. They'd want us to tackle it.

Yet we haven't had even one phone call or email. While Robert F. Kennedy and the organic industry groups in his camp dutifully repeat 'can you be sure?' conspiracy rhetoric on social media, even in my town - which had a Whole Foods when they only put their stores in havens of wealthy progressive elites - 5G hysteria quickly fizzled out.

Environmental lawyers, or whoever must be pushing this stuff, and their deniers for hire are stuck getting weird rambling attempts in obscure papers in Holland.(1)

That's a win for public trust in medicine and science, especially during a pandemic when the public needs to know that there is real science.

5G hysteria is not even junk science or pseudoscience, it is nonsense. There is no science to any of it. It is in defiance of physics and there is no plausible biological mechanism for how it could cause harm. If you want to believe in it, you first have to embrace homeopathy. And if you do that, there is nothing science will ever do to make you see reason.

(1) I am mentioned in the article as being in opposition to "radiation scientists" on this topic yet none are mentioned. The piece is an endorsement of a psychologist, not a radiation scientist. Radiation experts not only agree with me, they think the archaic 1940s linear no-threshold model (LNT) for radiation risk should be thrown out and replaced with something based on science.
Science 2.0
More Articles All Articles
About