Hank Campbell
The 1973 Roe v. Wade decision has been overturned, which means that the Supreme Court ruled that the right to an abortion is not federally protected by the US Constitution (in the 1973 case, that it couldn't be illegal under the Due Process Clause of the 14th Amendment), and is instead up to states as per the enumerated powers part of the Constitution. As most of you know, when the Constitution was written, states were concerned about replacing one autocratic centralized government with another, so the Constitution, and then the immediate Bill of Rights, were written to specify that if it was not in the Constitution, it was left to states. That is why trucking is managed by the federal government, it is interstate commerce, while driver's licenses are done by each state.

Whether or not abortion is federally protected under the 9th Amendment - unenumerated powers get protection just like enumerated ones, and no one in the 1780s thought government could prevent a woman from terminating an unwanted pregnancy - will be decided by court cases that will go into the works immediately. I support the right to choose and as a political issue I got no dog in this fight, so I would not ordinarily comment on what is a political/legal issue and rarely a health one (more on that below) except most people commenting are entrenched and often engaged in hyperbole, and that does a disservice to the science and health audience looking for answers.

So here is the short version.

For 59 percent of the population, nothing at all changes. When Roe v. Wade made abortion a federal issue in 1973, 20 states already had legal abortion and that trend was going up. Now there are 28, and a clear majority of the population. Along with clear political lines.

What should be clear and is not, is the science and health situation. One ethical problem the US had compared to Europe is that using the 14th Amendment Roe v. Wade placed no limits at all on abortion. The US is one of only two countries that allows (now, allowed) abortion at any time for any reason. In the case of the mother's health, though, every country allows it. Yet in cultural claims leading up to this decision there was a lot of misinformation being put out on social media. This is a polarizing example from May, after someone leaked talking points about this Supreme Court discussion. 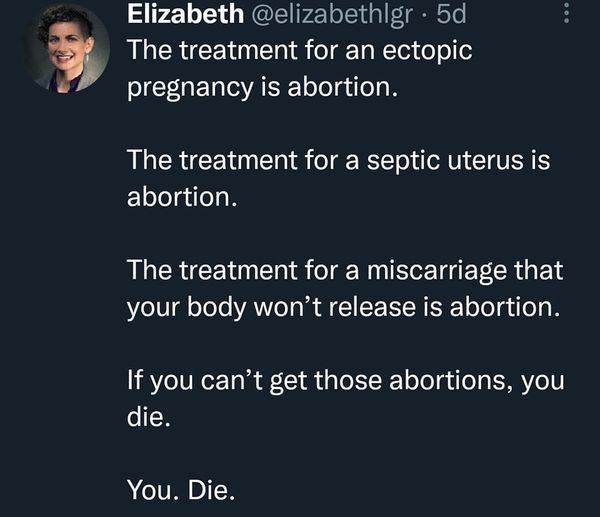 This is all accurate, yet it really has nothing at all to do with Roe v. Wade or the 14th Amendment or the next argument for abortion, the 9th. No state, even before Roe v. Wade, banned any of these procedures. None will now. No civilized country tells women they have to die. Claiming that letting states decide on abortion rules means mothers will start dying is deceptive, unless we are going to claim France bans abortion because they don't allow it in the last trimester - except for medical reasons like these.

One reason why only 28 states have abortion locked in may be that while politicians and citizens in states like California and New York believe abortion should be considered part of the US Constitution, women do not agree. This is a paradox that has been discussed for decades in left-wing outlets like The Guardian while being used as a wedge by opponents, primarily on the right. Nearly twice as many women as men want more restrictions on abortion. Again, the US was one of only two countries without any restriction, and that left it up to states and we ended up with the same patchwork laws we have for guns and even things like GMO food labeling.

That can now change.

Having an opinion on something as a personal issue is not the same as wanting a legal precedent removed - you can be anti-abortion on a personal level yet pro-choice when it comes to policy. Women may state they oppose abortion, and perhaps even don't mind limits on late-term abortions for any reason. It's only an academic debate when the law is there.

Now it is real. With Roe gone for now, the 22 states that have limits, and some even outright bans about to go on the books, may only have them in the short term. Women and men who may have stayed out of it because it was a federal right may change now that it is up to states again. Nuance is for the privileged.

If enough people in enough states care, now that Roe is no longer Constitutional using the 14th, then it will be possible to change the Constitution. As I and others have noted many times, when the document was written Japan was run by a Shogun, a King ran France, an Emperor ran China, and a Czarina ran Russia - yet the President of the United States is the only one of those still on the job. The thing is the greatest constitution in history - but it was written with a feather and the people behind it meant for it to change as needed.
Science 2.0
More Articles All Articles
About