An Alternate Approach To Stopping Mosquitoes That Spread Zika - Using CRISPR To Make Them Resistant To Carrying It
By Hank Campbell | January 28th 2021 07:59 AM | Print | E-mail

Hank Campbell
The mosquitoes that carry zika, like Aedes aegypti, are considered by all but the most activist ecologists to be useless disease vectors. There is nothing they do in nature that isn't easily done by other mosquitoes and they can safely join the 99.999999999% of species that have gone extinct without causing a cascade of doom.

Seriously, Send me your hate mail, @ me on Twitter, try to cancel me, I don't care, that is absolutely correct. They are ecologically useless and have survived despite that, because evolution is not always fair.

After years of study across two different administrations, the EPA signed off on a plan that would allow release of genetically engineered mosquitoes that can't reproduce - since their range is limited their area of effect would be only what we want, like the Florida Keys. In the Los Angeles Times years earlier, I had debunked the claims of an anti-science Florida "Karen" who was convinced biologists didn't know what they were doing and we were all going to be dead, the environmental equivalent of that lawyer who filed a lawsuit claiming the Large Hadron Collider would create a black hole and swallow the planet. Lawyer-run groups that wrap themselves in the flag of environmentalism have also been raising money opposing natural control of mosquitoes recently, conspiratorially insisting Trump controlled every career scientist in government so it can't be science if an approval was made during his four years. They argue using the blanket denier-for-hire mantra; there could be unintended consequences.

Like what? The outcomes they invent are more magic than mosquito reality, such as that Frankenflies will escape and create mutant offspring. In science realty, male Aedes aegypti mosquitoes are harmless, they don't bite us. These time-limited males mate with females and simply can't have pestilence offspring.

A new study thinks it can fill the gap in the concern activists say they have.(1) What the scientists behind the paper use as their selling point is they won't have the "environmental complications" of GMO mosquitoes that can't reproduce, because by using CRISPR they have created mosquitoes that can't replicate the Zika virus at all, so females won't send it to humans when they bite. 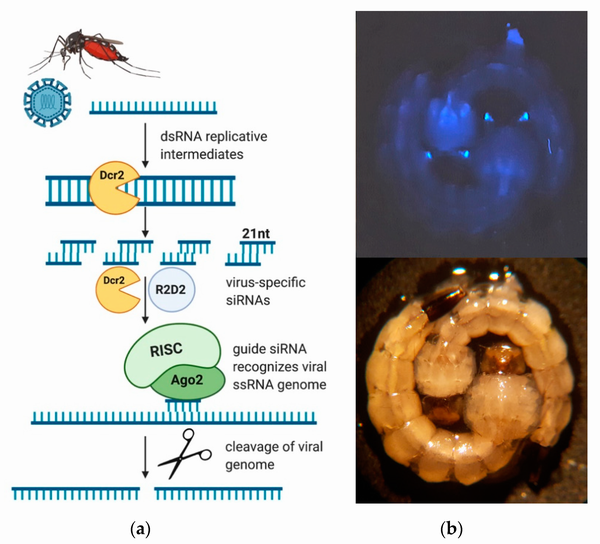 Scientifically, that is great, but people with experience fighting the war on science know that it won't change anything. Science is a veneer for environmentalists. Activists hate CRISPR as much as they hate GMOs or RNAi or everything except the organic food created using Mutagenesis chemical and radiation baths. They will oppose this because the trait that keeps them from transmitting zika is heritable. It can be passed down. That will be spun into world-class "environmental complications" and Frankenbug unintended consequences so dumb even that terrible Dustin Hoffman movie Outbreak didn't try to use them.

If this gets close to testing, and the propaganda campaign against it ensues, the authors will then scramble to assure the public that Aedes aegypti proteins are not expressed salivary glands so humans are not at risk, this cannot mutate, etc., but they are not equipped to combat the disinformation and misinformation of a $2 billion-a-year marketing machine. By then half the public is already against it, the same way Democrats oppose the Keystone Pipeline despite Obama administration scientists clearing it - twice, the second time after Obama staffers made them do it again because they wanted to ban it.

That's a problem down the road, though. For now, applied use isn't even a discussion, it is just intriguing basic research on how we might solve an infectious disease problem in a way that might make people feel better than pesticides.

The problem is that environmentalists have turned all of biology into their new "Silent Spring" fundraisers. That's ironic, because Rachel Carson believed biological solutions like this were the ideal replacement for pesticides.

(1)  Which falls into the real trap of activists; it is not about science, they claim you can fix the thing they object to but they will then move onto another. See Golden Rice. Academics believed that the concern was really about corporate control over food, and was not a war on science itself, so they created a public domain fortified bowl of rice. They quickly learned it was not about Monsanto at all. Having no corporate sponsor, they had no lawyers, but environmentalists are lawyer-heavy, and blocked its approval easily, while their marketing groups and academic allies insisted it would not work anyway.
Science 2.0
More Articles All Articles
About