Hank Campbell
Japan has a high suicide rate, so it was news when there were reports from the National Police Agency that October 2020 had more suicide deaths in just that month than they had deaths due to COVID-19 for the year.(1)

A recent cohort study analyzed Japanese Ministry of Health, Labour and Welfare data for the period before and during the pandemic, people who committed suicide each month from January 2009 to September 2021, and found that early on in the pandemic there was no meaningful increase, but there were clear surges of suicide incidence among women and men in their 20s later. Like in most countries, early on being isolated or sequestered was considered an act of kindness for those with co-morbidities, but as it became 'the new normal' issues and concerns rose.

Why young people, and especially young women, committed suicide so much more is unclear. Other papers note stay-at-home orders were associated with loneliness and increased anxiety, and also that younger adults reported being more vulnerable to depression and anxiety due to restrictions on social behaviors. It may be that older people were less likely to go out anyway and it didn't bother them as much. 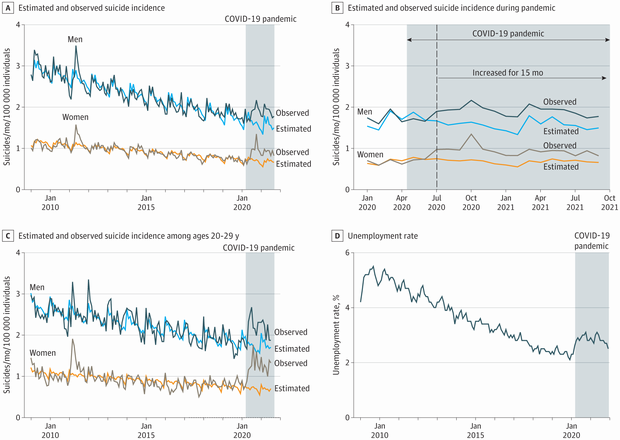 There is no causal link to anything specific but cultural pundits have noted that women are more susceptible to domestic violence and that could be a factor in Japan. Women also have greater child-care responsibilities in Japan as elsewhere, which meant more stress when kids were forced to stay home. If that would be more stressful in Japan is speculation. Staring at your phone and texting people on other trains rather than talking to anyone on your own was common in Japan a decade before it arrived in the U.S. but it may be that being on the train going to an office was more important than realized, or that people who needed personal contact were impacted far more than realized.

That part did cross cultural boundaries. Even by the fall of 2020, over half of Americans said their mental health had worsened and prescriptions for anti-depressants were on the rise in the world's already most medicated country.

One thing is clear; long after the COVID-19 pandemic has passed, the mental health pandemic, "deaths of despair" and suicides, linked to counter-measures will be with us.

(1) Some of this is a challenge to calibrate. Japan claimed they only had 2,000 deaths from COVID-19 in those 10 months - impossible for a population of 126,000,000 on an island - and were touted as a model of health care efficiency and a reason to nationalize hospitals in the US, but later it was revealed that in most hospitals there was no effort to categorize it, they treated COVID-19 like flu or anything else causing respiratory distress and were not checking off boxes, the way the US was counting it as coronavirus even if you got shot to death but had tested positive for the virus 30 days prior.

We'll never get a truly accurate count because American Exceptionalism applies - pandemics have to be worse in America than anywhere the same way snowstorms in Manhattan are routinely deemed 'storms of the century' by reporters living there. But we know countries like China and Brazil drastically under-counted, the former for political reasons and the latter because they lack the government infrastructure to do so.
Science 2.0
More Articles All Articles
About