Hank Campbell
Environmentalists may hate science but they love to ignore inconvenient truths about alcohol - namely that it is a toxic carcinogen the way they wish  (insert whatever they are raising money on this week) could be.

Though the International Agency for Research on Cancer declared alcohol a class 1 carcinogen long ago, right along with smog (PM10) and cigarette smoking, alcohol is the only one that gets awards so if you want to give yourself cancer for Earth Day/Lenin's birthday (1), I'd like to suggest tequila, because Tequila Herradura was recipient of the 2015 Environmental Excellence Award from Mexico’s Federal Attorney for Environmental Protection (PROFEPA).

I didn't have to research all that much, I can barely even drink a beer, but I got an email from their media liaison who thought this was a good pitch for Earth Day. I agree. Like the gusano (worm) you might find crawling around your tequila bottle if you got mezcal by mistake(2), Earth Day-friendly tequila is mostly a marketing gimmick for rich white people. But that's okay, so is Earth Day. 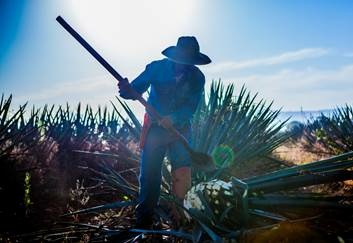 And after nearly 50 years of bleak prognostications, none of which have come to pass, they need a little humor. So instead of environmental desire to use government crush the life out of humans, let's talk about a gigantic volcanic stone crushing agave.

I am not sure any decent sized tequila maker still does it using gigantic volcanic stones, instead they mostly tout how they do things the modern old way, which means the old way is just in marketing campaigns with pictures of George Clooney on scooters and such. Tequila Herradura (real name Grupo Industrial Herradura) doesn't have George Clooney so it shows imagery of Mexicans cultivating plants by hand but the company is actually part of $3 billion Brown-Forman...of Kentucky. The company that owns Jack Daniel's bourbon. And they make 4,000,000 gallons of tequila a year. It's a solid plan to ignore the conglomerate aspect and focus on the hacienda part. Customers are willing to suspend disbelief, it has been shown. Ben  &  Jerry's is part of multinational chemical company Unilever but hippies buying holistic ice cream don't need to know that. Heck, many small organic farmers can't even get into co-ops but Whole Foods pushes imagery of their suppliers picking weeds by hand even though none of that is true, and they are owned by Amazon.

Some of the marketing is kind of funny. Tequila Herradura notes its on-site waste water treatment plant, stating it "meets all regulatory requirements for Mexico." As if everyone looks to Mexico as the standard for safe water. They say they have tackled the bagasse waste (that's the leftover stuff from processing of sugarcane and agave and some other plants) by using it as compost but the line between compost and landfill is pretty subjective.

And the company had no interest in going on the record for this article so I couldn't get clarifications. I don't blame them. They pay ad agencies to get science and health nonprofits to give them positive spin, not to engage in critical thinking.

But I am not being mean to them. I absolutely think that if you want to drink tequila for Earth Day and pretend you are being environmentally responsible doing so, this is a fine way to go.(3)

How to make your own tequila

I don't recommend this. If you buy a hacienda (Tequila Herradura does have an actual Casa Herradura, they say they are the only ones with a tequila hacienda) and start telling Mexicans to make your booze you are going to get yelled at for cultural appropriation, and while tequila takes no time at all to age growing the blue agave takes 8 years. Instead of importing 100 lb. pound plant hearts you can buy agave syrup, which will supposedly be organic but everyone selling commercially is using chemicals of some kind in Mexico and the U.S. You'll need lower fructose yeast than you use in other brewing (the company says they still use wild yeast and roast the agave hearts in clay ovens) but you can use your milk can boiler or however you are making your moonshine, even to ferment it.

Your 10 gallon wash (assuming a 13 gallon boiler) at 8.7 percent alcohol by volume should net you two gallons at 40 percent. After distillation let it age for two weeks in an oak barrel.

Obviously if you start now it won't be ready in time for Lenin's birthday...I mean Earth Day...but some things are worth the wait.

(1) It is obviously no coincidence the first Earth Day was held on what would have been his 100th birthday and will be on his birthday again this year. Lenin did believe that communism prevented environmental degradation (he even outlawed it) and environmentalists believed that social authoritarian governments were needed for pretty much everything. The great Robert J. Smith of Competitive Enterprise Institute has the full story.

(2) Though all tequila is mezcal not all mezcal is tequila. Tequila is made with blue agave while mezcal is made using any agave.

(3) Alcohol is arguably the only product where environmental activists, and companies adopting sustainability lingo, will invoke "the dose makes the poison."