Environmental Campaigns Against Nuclear Science Limits Its Acceptance, Even In Thought Experiments On Reducing CO2
By Hank Campbell | May 7th 2019 07:04 AM | Print | E-mail

Hank Campbell
Can all nuclear energy be weaponized? It could, according to US politicians in the 1990s, when President Bill Clinton and Senator John Kerry mortally wounded nuclear energy development, to the cheers of their constituents. It was all based on claims by environmentalists that nuclear energy invariably led to nuclear weapons.

This war on science had started long before and it continued well into the 2000s, when two successive anti-nuclear activists, neither with degrees in energy, were put in charge of the Nuclear Regulatory Commission. The events in between are important context. During the previous generational war on nuclear science, America had switched to more coal plants. After causing more coal to be used, due to killing nuclear power, activists started fretting about the global warming caused by the coal plant emissions that they had caused to be increased. They had quite literally created a problem only they claimed to be able to solve. It's a fundraising playbook still in use today: Activists promote a concern, get something banned, use their victory to get donations, then they get more donations saying only they can fix the new problem they created by banning the old one.(1)

We can only dream about where nuclear would be if American science and technology had been working on it for the last 25 years, the way we have cell phones and televisions. (2) 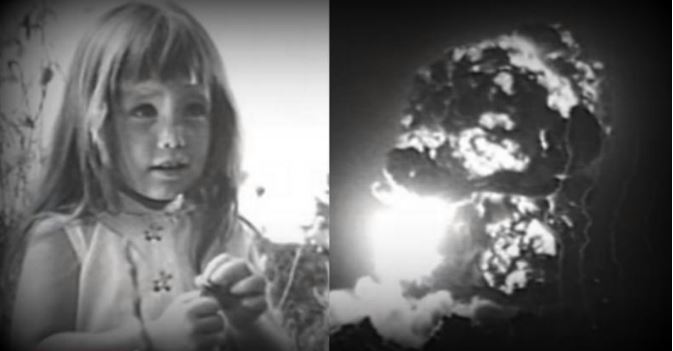 In 1964, years before Clinton and Kerry, Lyndon Johnson signed off on an ad saying that if you didn't vote for him, nuclear bombs would go off. Environmentalists latched onto the technique immediately. Not doing so really penalizes the pro-science community. As I have said for years, telling people their world is much safer than in the past is a terrible call to action.

Clinton and Kerry didn't start this war on science, but they ended it. America leads the world in adult science literacy, in Nobel prizes, and in science output, so without America leading basic research in nuclear the same way we do pharmaceuticals and cell phones, progress was stymied. While plants still remained in Japan, Germany, and other areas, activists knew it was only a matter of time before those plants would reach their end of life and political winds shifted their way.(3) And those political shifts happened. After a tsunami caused a shutdown at the Fukushima Daiichi nuclear plant in Japan in 2011, Germany seized the public relations opportunity to shut down their nuclear energy. Though the New York Times had gleefully promoted worry that a million people would die due to Fukushima radiation, it turned out to be none. The only people harmed in Japan were fleeing the region because of the hysteria about radiation.

Forty years after Three Mile Island, also where no one was harmed(4), and even though 1 in 5 kilowatt hours of electricity in the US come from nuclear, people are still worried about it.  Radiation is still a "dreaded fear" thanks to environmentalists promoting it.

Yet they didn't create it. The way it came to be policy is so bananas no one would have thought it could work.

Environmentalists didn't create the shoddy LNT problem, but their lobbyists and allies keep it alive

Fear that any radiation was bad began in the 1940s. The linear no-threshold (LNT) model of radiation exposure - basically any ionizing radiation will kill you - was formalized then. Though its premise was unproven it was not wrong to be cautious given the state of the science at the time. The problem was that after it was shown to be false, it continued to be promoted. LNT is still U.S. epidemiological dogma even though it has been shown numerous times to be completely wrong - Guarapari Beach in Brazil is 300X "accepted" levels of radiation but people love it for its supposed healing properties. That denial of science has had repercussions throughout public trust in research. If scientists are just "tinkerers" engaged in mad experiments, as activists routinely claim, it is easy to promote that cell phones cause cancer, every chemical not labeled "organic" is an endocrine disruptor, and to promote various other flavors of homeopathy, including that vaccines cause autism.

You read that part about cell phones right. Activists know that the word "radiation" is bad, so even if the radiation is non-ionizing, like cell phones, they raise money claiming it must be harmful because of the "radiation" word, and people will worry about it and then epidemiologists will rush to statistically correlate it to cancer, some of them hoping they will get in the New York Times and trial lawyers will pay them to be expert witnesses.

A recent experiment on how to prevent global warming showed the uphill battle nuclear energy faces. In the study, 600 people tasked with reducing CO2 emissions by creating an energy 'portfolio' were shown labels for options like nuclear, solar, natural gas, etc. while another 600 were shown how much environmental and accidental risk each choice posed. Both groups were told about the number of deaths that had occurred in the worst accident that had occurred with each.

Even though both groups saw the actual numbers of deaths, the people who got labels showing nuclear wanted to use it far less than people who just saw the low risk.

Both groups had the same data but one group saw a nuclear label and even though the risk was still trivial, many associated it with a disastrous potential outcome, which made them less likely to use it to curb CO2 emissions. Thanks to IARC and trial lawyers getting juries to believe a weedkiller might cause cancer in humans, people only think about hazard. There is no safe level, to activists one dose is the same as 10,000 doses.  LNT dogma is ingrained in culture despite it being completely wrong.

The authors note this fear "leads respondents to choose 40% less nuclear generation in 2050 than they would have chosen in the absence of this dread."

There is a giant chasm between the concepts of hazard and risk when it comes to nuclear energy but it is entirely achievable to close it. I mentioned 36 million automobile deaths since Chernobyl but no one says we should make cars $2 million each or ban them or lower the speed limit to 5 miles per hour, and that's due to the first order benefit cars provide.

Yet energy is a second-order good. We plug our phone charger in, so if one group says wind power will work as well as a coal plant, people are inclined to side with the person promoting wind. Electric car purchasers even think because they are plugging their cars into an outlet they are better for the environment, because the public don't understand energy generation. That's not a problem, it's a benefit; we have kept gas affordable (even in California, where taxes are added on to the extreme, the cost is 40% what petrol is in Europe) and electricity remains cheap as well, which means people can make it a values issue.

If curbing CO2 is a values issue, the way Democrats say it is then it should be entirely possible to flip the script on activists and get Democrats out of their grip on the nuclear energy issue. Republicans will be sure to agree, because they have been pro-nuclear all along.

But thought experiments are not actual behavior, any more than surveys are. Using statistically significant results from surveys, I can show both Republicans and Democrats deny vaccines equally, but actual behavior reveals the truth (vaccine exemptions in California alone are more than the rest of the country combined). And behavioral truth may be the issue for uptake of nuclear. Everyone claims to care about reducing pollution, but many may want to believe in fairy tales, like that wind and solar are better than science.

Activists copied this playbook for chemicals as well. For example, environmentalists took a statistical blip of bee deaths 20 years ago and blamed pesticide spraying. So science created non-spray seed treatments that were based in nature, called neonicotinoids. The next time a statistical bee die-off happened, they blamed the new seed treatments. Bees are fine again but periodic die-offs have been recorded for as long as records of bees have been kept, so it will happen again. Maybe next time they will blame nuclear power.

(2) Anti-science progressives insist that nuclear could still have been researched all this time, without any federal funding, which is the exact opposite of the argument they used about human embryonic stem cell research - where they insisted only federal money could lead to progress, even though hESCs were created outside the federal grant system because of the federal funding law of...the same President Clinton who limited nuclear research. And arguing that we needed to spend $70 billion subsidizing solar panels because of the greater good.

(3) Chernobyl is also still invoked as a nuclear Armageddon, even though deaths related to all nuclear energy in history have totaled about 200. Chernobyl accounts for 28, all firemen responding to the accident, though some will add another 15 as related deaths. The linear no-threshold (LNT) model of radiation exposure - basically anything will kill you - is still U.S. epidemiological dogma even though it was always scientifically suspect and has been shown numerous times to be wrong. Because of its success in scaring people about radiation, environmentalists now use it to claim cell phones cause cancer, every chemical not labeled "organic" is an endocrine disruptor, and other flavors of homeopathy.

While up to 43 people died from Chernobyl, the worst nuclear accident in history, 36,000,000 have died due to automobiles, yet much of the public regards nuclear energy as too risky. That's very effective anti-science framing.

(4) I was living upriver from Three Mile Island 40 years ago when on March 28, 1979, the reactor there shut down. 80,000 people evacuated as a precaution and they were not wrong to do so, but now because of concerns about global warming and the lack of viability for environmental alternatives like solar and wind, efforts are on to keep it open.  Wacky claims about all those future deaths, created by people who couldn't do basic arithmetic much less be willing to submit their work to peer review, turned out to be hype. President Jimmy Carter had been in the US Navy so he was quite comfortable with nuclear power, and said the accident was minor in private, but he knew his constituents were vehemently opposed to it so he said nothing in public.
Science 2.0
More Articles All Articles
About