Hank Campbell
Zooey Deschanel, whose picture could be in the dictionary under "adorkable" thanks to starring roles in "Elf" and "New Girl", isn't well regarded in science, and hasn't been since for as long as she's been undermining it, which is as long as people have known her name. That's now a long time, since "Almost Famous" is about to turn 20.

But such vitriol directed at her may not be fair. She is actually a rather moderate rich white elite, only guilty of telling people they shouldn't eat fruit and vegetables unless they can afford to eat the way she does. She may not always realize that she is in the top 1% of the 1% or remember that "organic" is just an alternative marketing designation, but at least she isn't isn't selling jade eggs and telling women to stuff them in their genitals.

She and husband Jacob Pechenik, formerly an unknown executive at something called Intercontinental Exchange (ICE), which is such a nondescript name for a 'financial services' firm it could pass for a CIA front in films, and who is now an "executive" producer in Hollywood, have instead rolled out Farmstand. which promises you easily grown "superfoods." All it takes is a $400 start-up cost plus $600 a year and it will do all of the work. 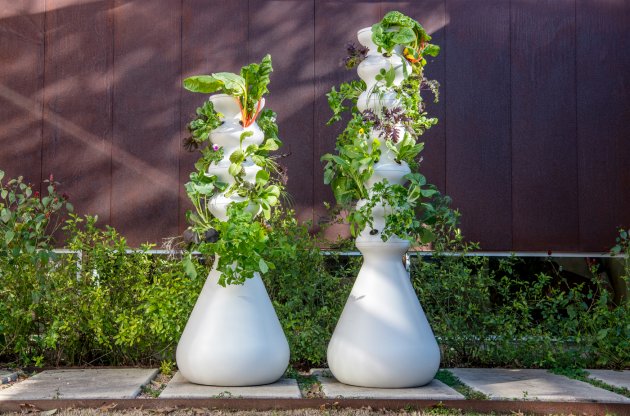 If you are a Sneech who wants to buy a star, someone out there will sell you one and Los Angeles is full of Sneetches who want to be the stars, or at least be star adjacent. If you want to virtue signal to Pechenik that he should put you in his next film (he can't, he is an executive producer so his job is to put producers who need money in contact with people who have it) and you live in Los Angeles, where even an average food budget is nearly $10,000 per year, $1,000 is not so bad.

If you buy a special label, you can convince yourself you're a better person. Credit: Random House.

Plus it looks cool. Like, as Jeff Bercovici of Inc. termed it in his gushing celebrity profile, "a cross between a fancy bong designed by Jony Ive and one of those new-school security robots that patrols the mall." That is the kind of quasi-futuristic, hipster rebellion virtue signaling mashup lingo that elites on the coast enjoy. But 40 million Americans, 15% of the population, instead get by on just over $250 a month in food for their entire households.

If organic food is really a social justice issue, as Deschanel  says it is, why not use that wealthy brain trust - Pechenik's occupation is literally convincing people with money to give it to those without - to create something for the poor instead of yet another device for rich people? People in apartments aren't going to have a back yard to stick these things in, they're going to have dirt stinking up their living rooms, despite the claims that Deschanel and Pechenik make for future models. For people who do put them in their yards and don't use pesticides, guess what will happen to them? Pests will eat them.

The duo claim they want the world to "reconnect" with their food and every farmer in America wishes that would happen also. The downside to making food affordable for everyone is that it has become a commodity rather than even a basic necessity, and that means most don't know how it works. When something is cheap people can make it a values issue. Unless you are poor. Why not help poor people reconnect? Low income people get by on just over $250 a month for food and that is sufficient to not only eat enough, it is sufficient to get fat. Science has led a breathtaking war on hunger so profound that historians will look back on it as a watershed in human history; it will be applauded as the first time in the history of planet earth that people who were not rich could afford to be obese.

The Farmstand seeks to pay homage to scientific and technological progress - look at how sleek it is (and the descriptions; 4 growing levels! 24 ports!) - but instead of really celebrating the modern world it wants to retreat to techniques of the past, the kind of world University of California Professor Garrett Hardin dreamed of when he wrote The Tragedy of the Commons in Science magazine, one of environmentalism's most popular (40,000 citations) foundational articles.

But like almost every environmental leader of the time, he was a racist and a eugenicist, and that is a stigma that haunts modern environmental groups when they go to developing countries and tell poor people of color modern medicine, energy, and agriculture are out to harm them.

And organic lobbyists will harm competitors. Because the Farmstand is hydroponic, organic trade groups will ensure it cannot be called organic food, even if it only uses seeds made using mutagenesis and only organic certified toxic chemicals. They insist it can't be organic because hydroponic uses no soil. Yes, that means no soil depletion, which should be a good thing to environmentalists, but this is about making money, not protecting nature. Nutrients and water will grow the wrong kind of vegetables for them.

Deschanel is correct, more people should "connect" with their food again. If they did, they would know that the organic process, or hydroponic, or whatever other label is used, makes no difference in the quality, it should be about making sure fruits and vegetables stay affordable enough for everyone. For those who are not part of the 1% the most important label we should want them thinking about is this one: