Hank Campbell
Random violence is obviously a psychological problem. Every mass shooting has a link to psychiatric medication but medicine doesn't cause shootings any more than guns do. Yet we know that together there may be warning signs because number one in firearm deaths is not mass gun shootings, those are so rare they are big news, it is suicide. (1)

It's in the 1,860 first-time firearm purchasers (from nearly 25,000 surveyed) that things get interesting. The majority of people bought a gun for home protection but those with moderate depressive symptoms were over 100 percent (129 respondents [16.6%] vs 84 respondents [7.8%]) more likely to say they bought it because of the COVID-19 pandemic or protection against someone they know (56 respondents [7.2%] vs 41 respondents [3.8%]).

It is not much of a surprise that media had people in a panic about COVID-19, including fears of looting. Journalism is an advertising platform with a news delivery mechanism so they are going to write about fear of something, then write that fear of the same thing as overblown, and then write about the controversy they created. It isn't much of a surprise people with mental health issues were more worried about looting.(2) It isn't a surprise people with mental health issues may think someone is out to get them. Both can be true, but on a population level they are not likely. We are at greater risk of looting and violence after a Swansea football team loss or during a protest of violence in Portland than we are in our homes.(3)

The results are interesting because, as the authors note, other studies focus on people with interest in firearms so there is selection bias. This was designed to be representative of the overall population. There are still limitations to the method used. It was a nonprobability survey (the authors cite cost) and an internet survey faces the same problem using a landline does - the people responding like taking surveys and are available in a limited medium.

Suicides among celebrities have been magnified during the pandemic but gun suicides did not go up, they went down. Drug overdoses went up. Gun purchases went up. And it is important to note that depression was not linked to likelihood of buying a firearm. It just happened that people with major depression, or at least symptoms of it, did.

All it may mean is that if you have a loved one who has a history of depression and they say they are going to buy a gun, have a conversation. You can't get too pushy, or you may be the person they claim they need a gun to protect themselves against.

(1) Guns don't cause suicides but that does not stop activists from declaring gun ownership a "risk factor" for suicide. That only polarizes people, including common sense gun owners who like regulations but resent the "framing" and emotional verbiage by gun ban proponents. What isn't a risk factor? I can correlate milk to gun shootings and suicides with statistical significance. If human behavior was easily predictable we'd just ban whatever causes suicides and be done with it. Instead, in countries where guns were and are banned, suicides did not go down. Japan would have to next ban rope because removing tools of suicide doesn't solve the underlying problem. Obviously guns may make it easier to some, and if that is true Japan would rocket past Russia, Finland, Korea, and the US should guns become legal.

(2) When Sean Penn wanted to do a photo op visiting New Orleans after Hurricane Katrina, he carried a shotgun. While he looks ridiculous in hindsight, it wasn't at the time. Media claimed there were dead bodies floating in the streets and that the city was like a scene out of "Escape From New York."

Yet something sticks out that has nothing at all to do with mental health. Interest in gun purchases was higher for people of color, people in the south, and of course people with money. 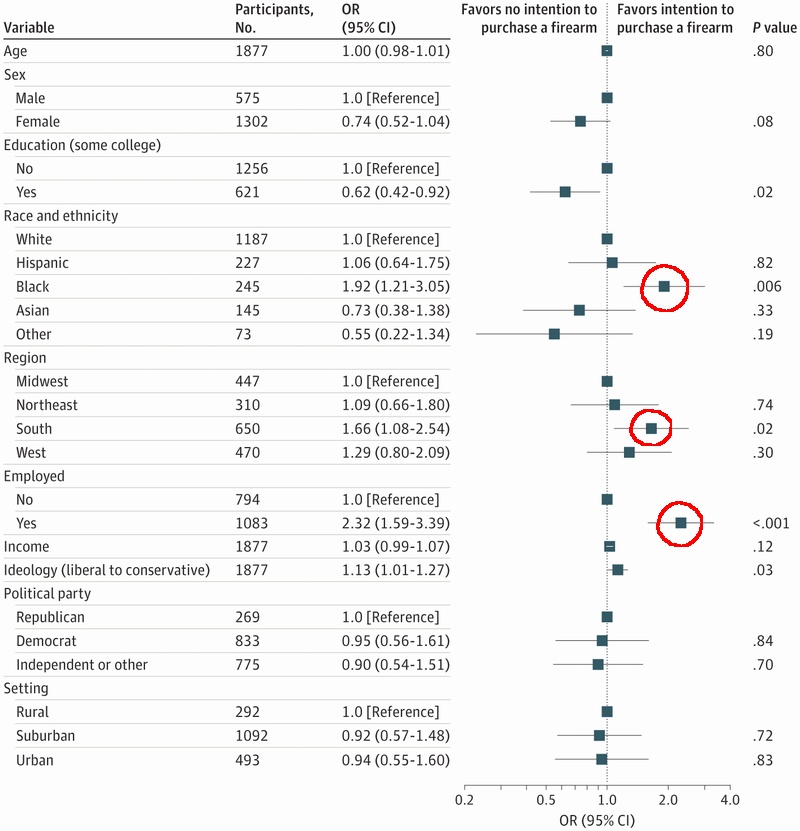