Hank Campbell
At a time when sue-and-settle activist groups like Center for Food Safety continue to claim scientists - across the private sector, non-profits, and government agencies - are colluding to poison us by allowing safe pesticide use, their messaging is being ignored by more consumers than in decades.

Rather than being afraid of science, fear that CFS, Center for Science in the Public Interest, Pesticide Action Network, and various others had created with some success for the last few years, people are demanding vaccines and they are demanding chemicals that work instead of having some green fig leaf on the label.

And a new Pew study finds that people all over the world are shifting back to trust in science in multiple areas. The best news; in defiance of the 21st century, that swing is happening more strongly among those who identify with the left. Those on the side of the political aisle most likely to think "chemical" is a dirty word, that organic food uses no pesticides, and that vaccines cause autism are now beginning to side with science once again. Just a few years ago California led the country in vaccine denial, with more exemptions for the children of rich people on the coast than the rest of the country combined. Now they are wondering why Big Pharma has not yet created a COVID-19 vaccine and why FDA is not ready to rubber-stamp everything they see.

A lot of that trust may be in climate change, one of the few areas where the left claims to accept science more than the right; just like with rabid right-wing activists, it is unclear how much of that supposed trust is because they need to feel important and staving off doomsday they hope is coming in the next 18 months feeds that vanity.

Food is still a hotbed of science denial for wealthy elites who claim to be progressive, primarily in the U.S. and Europe. People in both regions were fortunate to be born in an agriculturally fertile area. Europeans were born so agriculturally lucky that anti-science groups like Swiss Public Eye can engage in modern food colonialism and berate poor countries like Brazil for needing to use pesticides that Europe can do without. In true "let them eat cake" fashion that Europe is famous for, they assume that because they can actually grow a lot of food using less efficient, more toxic copper sulfate and other pesticides that can be called "organic", everyone in the world can also. And in similar tone deaf tribalism, they believe that since what they can't grow they import, as long as Russia or China will slap an unverified organic sticker on the crate, poor countries can afford that as well. 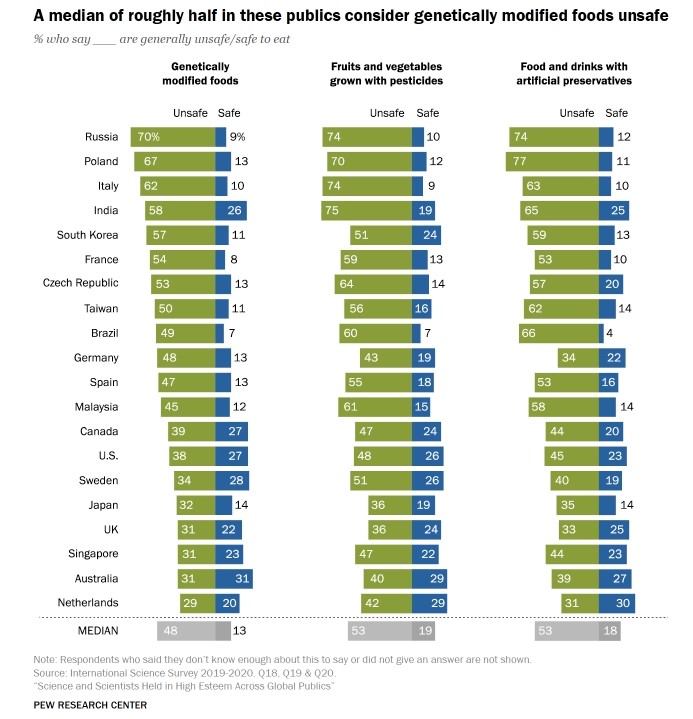 This is actually a big improvement. Of course Russia thinks western science is bad, it's what led them to claim everything they grow is organic - so they could compete in Europe. But good and bad are relative. If I say 'only 28 percent of adult Americans have science literacy' that sounds bad; unless I also note that 28 percent is number one in the world for that.

While it's nice to be rich, most of the world is not so lucky. Science has helped them to grow their own food instead. And they love science for that reason. Brazil has even had enough of Europe's "path of unconstructive criticism" that they are fighting back despite the risk of standing up to bullies like Switzerland, who have been afraid to fight against real despots for the last 500 years but act like one when it comes to pushing around developing nations.

Science marches on while anti-science activism is being left behind

In the U.S., a pesticide named atrazine, once the target of an organized campaign by numerous anti-science groups, has again sailed through EPA re-registration and that has lawyers longing for the old days, when all they had to do was pay their in-house expert witness, Martyn Smith or Chris Portier or whoever, get someone on the stand who claimed they used a chemical and got cancer, and juries would hand them a judgment.

This is much different from the last time it needed to be proved safe to EPA to maintain its approved status. Just prior to its last effort, Berkeley Professor Tyrone Hayes, who is on a vendetta against Syngenta, which makes atrazine, had gotten a friend of his in the National Academies of Science to hand-walk a paper to publication claiming atrazine was 'turning frogs gay', as he later phrased it. Its appearance thanks to that hand-picked peer-review by a personal friend, no data needed, alarmed EPA so much they called a special panel to re-investigate it. Well, we were all alarmed. Frogs are an indicator species, we look to them as that 'canary in the coal mine' that is part of the lexicon now meaning harbinger for danger. No one realized then that the paper had not undergone legitimate peer review, and it wasn't until my exposé in the Wall Street Journal that PNAS changed that policy so that hand-picking your friends as reviewers is no longer allowed.

Back then, even though they had no evidence - Professor Hayes refused to share his data - EPA demanded that Syngenta pay for two separate trials in two separate locations using methodology EPA dictated. The trials found no reason for concern. EPA cleared the compound. Then the Obama administration, no friend to science or agriculture, came into power and forced EPA to do another assessment. When that one found no cause for alarm, they called another one. Still nothing. During all that, the product was re-registered.

Now, since no frogpocalypse has occurred, it is entirely a figment of pictures whose data source Professor Hayes refuses to disclose, even to EPA, atrazine has been approved for re-registration yet again. Without any fuss at all. And yet groups like Center for Food Safety have their attorneys out in full force claiming that career government scientists are allowing manufacturers "to call the shots" - just the kind of conspiracy theory they leverage to shake down companies for profit.

They know that is a lie, but these efforts are not about telling the truth, they are about creating public opinion among future jurors. But those jurors are now more pro-science than they have been since the Reagan administration so it will be a hard road for these settlement-funded "non-profits" in the future.

Bigfoot does not exist, vaccines work, and our food is safe. Science has improved all of our lives and our environment is the cleanest in the world, despite what highly paid attorneys who make their money settling lawsuits continue to claim.

It is good that the public the world over are starting to wake up to that.
Science 2.0
More Articles All Articles
About