Hank Campbell
Many people don't realize July 4th, 1776 was not the day the war between America and Britain started, it's simply the day we traitorous colonists finally had enough of our own country's army attacking us, taking over our homes, stealing our food, locking up our guns, and throwing us in jail for no reason and we put the separation in writing.(1)

On March 17th, in 1776, St. Patrick's Day, nearly four months before Independence Day, General Washington wrote the governor of Massachusetts to tell him Boston was out of British control. He presciently predicted the next attack would be in New York. But unlike now, the links between Ireland and America, in both New York and Boston, were not very strong. Ireland was the first overseas colony of England, and by the 1700s was clearly controlled by them so even though the island had suffered the same economic plight as America due to the Navigation Acts they didn't have support at the top to break away. Many of the disgruntled poor instead left.

By 1776, there were people from Ireland, some 55,000 had arrived after the French and Indian War, but those fighting against England were a majority of Scottish descent - pesky Protestants rather than Catholics.(2) That is why British leaders said the troubles in the colony were “little more than an uprising of rabble-rousing Presbyterians.” Scotland had once been an annoying rival of England but in 1603 had gotten the Throne, courtesy of James VI of Scotland (James I of England.) He unified the two countries without force, thinking Scotland would forever be in charge, but it didn't work out that way. The Scots supported Charles II, their Stuart, against Cromwell in the English Civil War and when Stuart lost in 1650, so did Scotland. Scotland was simply part of the United Kingdom from then on, the blue background and white X of the Union Jack, but the Scots were treated poorly despite being in the flag and many of them moved to Ireland to get away from the English, where they were not treated much better. Then many moved to America, along with Scots still living in Scotland, like my family had in 1720.(3)

When the Revolutionary War broke out, few Irish wanted anything to do with it. They had seen what had happened to Scotland (4), they had even helped, but after American Independence was successful they began to note the American army was overwhelmingly Scots-Irish, either from Ireland or born of Ireland, meaning Protestant Scots who had lived there. Using that framing they were able to become a giant force in America and that cultural power eventually changed Ireland too. Resistance to the British in America did not come from Ireland, it came from Scotland, but resistance to Britain emigrated to Eire from America(5), just like modern St. Patrick's Day did.(6)

The Scots-Irish became so important in New York and Boston, and the Revolution so important to Ireland, that the editor of "The Irish World" newspaper wrote, “The Cause of America in 1776 is the cause of Ireland in 1876.” And now Ireland is so important to America 33 million Americans claim to be Irish while the actual population of Ireland is around 5 million.

It is said that everyone is a little Irish on St. Patrick's Day. Not me, I am still American. That we got from from Scotland too. 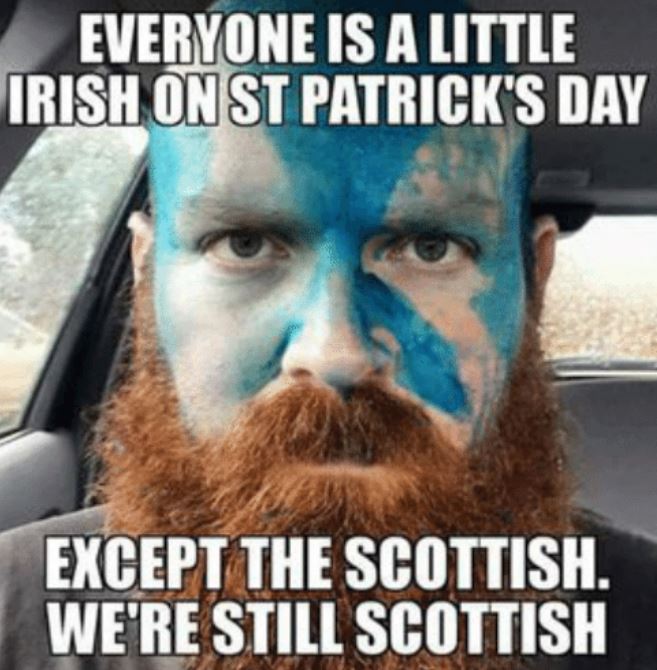 (1) It's why prohibitions against those actions, and other individual rights, ended up in the US Constitution in 1789. Thank you for noting that individual rights should be listed along with the powers of the federal government, Thomas Jefferson.

(2) Behind Scotland, England, and Ireland in representation were actual people born in America. Germans were in the mix as well, though since there was no Germany the way we know it now, they don't get the same credit.

(3) It got worse in Scotland after my family left. In 1707 the Parliaments were unified because Scotland managed their economy then much like they do now, but in 1745 they supported Charles Edward Stuart in rebellion against the English King and in 1746 were crushed at Culloden.

(4) Most of the Scots who didn't want all the drama seem to have left because by the end of the century Scotland had given us different sorts of revolutionaries: James Hutton, the geologist who debunked young earth creationism, the only economist whose theories can do more than predict the past in Adam Smith, and philosopher David Hume, who used logic in moral decisions and who basically believed nothing unless it was shown.

(5) The British had begun to draw more and more heavily on Ireland for its troops, even including Catholics by then, and the economic stress due to England's American adventure was crippling, bringing tax policies that would last and eventually culminate in The Great Famine of 1845 and would formally set Ireland on the path to rebellion.

(6) St. Patrick's Day parades started in New York City and the green was done by Americans as well. In Ireland it was more of a holy day than a day to get plastered on green beer.
Science 2.0
More Articles All Articles
About