Any movie buff knows that garlic spooks vampires and thus keeps you from losing blood.

Less well known is that eating garlic may keep your blood pressure at safe levels also.

A new study from the University of Alabama at Birmingham (UAB) shows this protective effect is closely linked to how much hydrogen sulfide (H2S) is produced from garlic compounds interacting with red blood cells.

The UAB researchers found this interaction triggered red blood cells to release H2S, which then led to the relaxation of blood vessels. Fresh garlic was used at a concentration equal to eating two cloves.

The resulting H2S production caused up to 72 percent vessel relaxation - in rat arteries, at least. Rats are not little people but it's an interesting exploratory result. 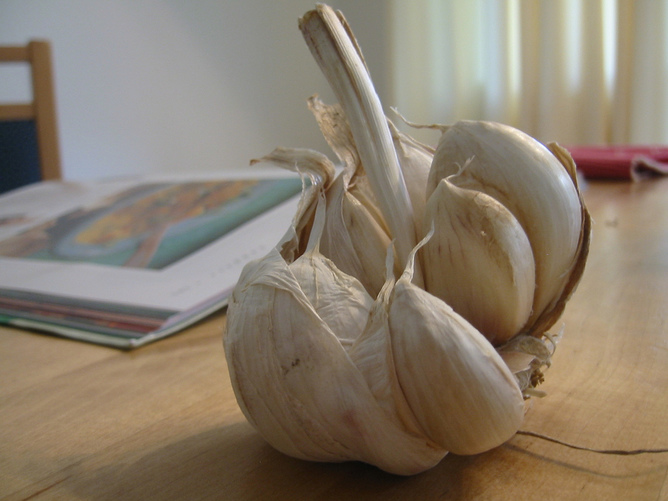 This relaxation is a first step in lowering blood pressure and gaining the heart-protective effects of garlic, said David Kraus, Ph.D., a UAB associate professor in the Departments of Environmental Health Sciences and Biology and the study’s lead author.

The research team examined molecules in garlic called polysulfides and their ability to liberate H2S within cells.  The findings appear in the journal Proceedings of the National Academy of Sciences (PNAS).

“When these garlic compounds are metabolized to H2S in the vascular system, the H2S targets membrane channels and causes smooth muscle cells to relax,” Kraus said. “So a garlic-rich diet has many good effects, and H2S may be the common mediator.”

The findings add to a study by John Elrod and David Lefer, Ph.D., of the Albert Einstein College of Medicine published in PNAS that showed H2S protected hearts from the tissue and cell damage often seen in heart attack patients.

The new study, performed by Gloria Benavides, Ph.D., of UAB’s Department of Environmental Health Sciences, Kraus and others, is the first to show garlic-derived polysulfides in the diet boost bodily H2S production.

H2S is a toxic, flammable gas responsible for the smell of rotten eggs. It’s also produced naturally by the body in small amounts, and as age advances, H2S production dwindles.

Exactly how H2S affords the cardiovascular system so much protection is unknown, but it may involve limiting oxidative damage in cells, Kraus said.

“The role of garlic compounds in preventing platelet aggregation, which can trigger a heart attack or stroke, and in limiting cancer growth and the progression of several diseases is well documented,” he said.

The new findings show H2S may be the mediator for these protective benefits.