By pairing two unconventional forms of carbon – one shaped like a soccer ball, the other a tiny diamond – scientists have created a molecule that acts as a rectifier - it conducts electricity in only one direction, which means it could be possible to cheaply shrink computer chip components down to the size of molecules.

Many electronic circuits have three basic components: a material that conducts electrons; rectifiers, which commonly take the form of diodes, to steer that flow in a single direction; and transistors to switch the flow on and off. Scientists combined two offbeat ingredients – buckyballs and diamondoids – to create the new diode-like component.  It's not the first molecular rectifier ever invented but it's the first one made from just carbon and hydrogen, a simplicity researchers find appealing. The next step is to see if transistors can be constructed from the same basic ingredients.

Buckyballs – short for buckminsterfullerenes – are hollow carbon spheres whose 1985 discovery earned three scientists a Nobel Prize in chemistry. Diamondoids are tiny carbon cages bonded together as they are in diamonds, but weighing less than a billionth of a billionth of a carat. Both are subjects of a lot of research aimed at understanding their properties and finding ways to use them. 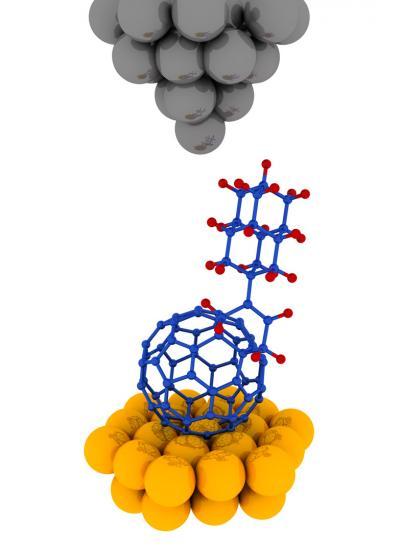 An illustration of a buckydiamondoid molecule under a scanning tunneling microscope (STM). The sharp metallic tip of the STM ends in a single atom; as it scans over a sample, electrons tunnel from the tip into the sample. In this study the STM made images of the buckydiamondoids and probed their electronic properties. Credit: SLAC National Accelerator Laboratory

"We wanted to see what new, emergent properties might come out when you put these two ingredients together to create a 'buckydiamondoid,'" said Hari Manoharan of the Stanford Institute for Materials and Energy Sciences (SIMES) at the Department of Energy's SLAC National Accelerator Laboratory. "What we got was a basically a one-way valve for conducting electricity – clearly more than the sum of its parts."

In 2007, a team led by researchers from SLAC and Stanford discovered that a single layer of diamondoids on a metal surface can efficiently emit a beam of electrons. Manoharan and his colleagues wondered: What would happen if they paired an electron-emitting diamondoid with another molecule that likes to grab electrons? Buckyballs are just that sort of electron-grabbing molecule. Diamondoids, the square cages at left, and buckyballs, the soccer-ball shapes at right -- to create "buckydiamondoids," center. These hybrid molecules function as rectifiers, conducting electrons in only one direction, and could help pave the way to molecular electronic devices. Credit: Manoharan Lab/Stanford University

For this study, diamondoids were produced in the SLAC laboratory of SIMES researchers Jeremy Dahl and Robert Carlson, who are world experts in extracting the tiny diamonds from petroleum. They were then shipped to Germany, where chemists at Justus-Liebig University figured out how to attach them to buckyballs.

The resulting buckydiamondoids, which are just a few nanometers long, were tested in SIMES laboratories at Stanford. A team led by graduate student Jason Randel and postdoctoral researcher Francis Niestemski used a scanning tunneling microscope to make images of the hybrid molecules and measure their electronic behavior. They discovered the hybrid is an excellent rectifier: The electrical current flowing through the molecule was up to 50 times stronger in one direction, from electron-spitting diamondoid to electron-catching buckyball, than in the opposite direction. This is something neither component can do on its own. An image made with a scanning tunneling microscope shows hybrid buckydiamondoid molecules on a gold surface. The buckyball end of each molecule is attached to the surface, with the diamondoid end sticking up; both are clearly visible. The area shown here is 5 nanometers on a side. Credit: H. Manoharan et al., Nature Communications

"Buckyballs are easy to make – they can be isolated from soot – and the type of diamondoid we used here, which consists of two tiny cages, can be purchased commercially," he said. "And now that our colleagues in Germany have figured out how to bind them together, others can follow the recipe. So while our research was aimed at gaining fundamental insights about a novel hybrid molecule, it could lead to advances that help make molecular electronics a reality."