The researchers examined a massive dataset of fossil teeth that included samples from members of the families to which Velociraptor and Troodon (possibly the brainiest dinosaur) belong. 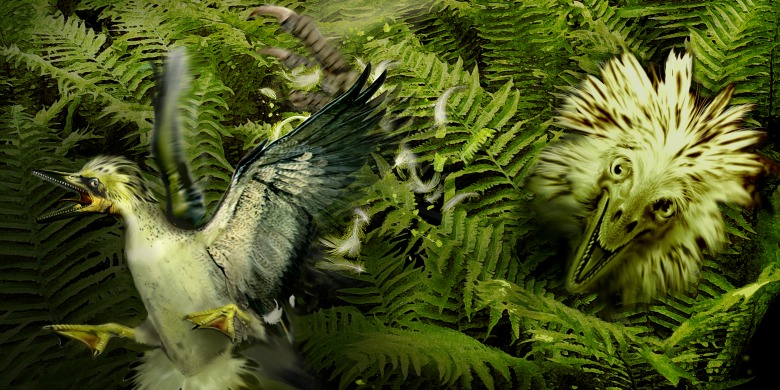 A Troodon, one of the small carnivores characteristic of Alberta dinosaurs, tries to catch a toothed bird. Artwork: Jan Sovak

The researchers say these two-legged dinosaurs ranged from the size of a chicken to two meters long. In most cases, tooth fossils are all that remains of small dinosaurs.

"We can identify what meat-eaters lived in what geographic area or geologic age," explained paleontologist Philip Currie. "And we can do this by identifying just their teeth, which are far more common than skeletons. It’s the same situation you have in today’s world with the remains of small animals like weasels. Because the bones are light and small in size, after the animal dies the bones scatter, and if they’re not covered by sand or mud they disintegrate very quickly.”

Luckily, the researchers do have fossilized skeletons with teeth for some of the small meat-eaters. For example, Troodon is a two-legged meat-eater about two metres in length, and Alberta is one area where its fossils have been found.

"Small meat-eating dinosaur skeletons are exceedingly rare in many parts of the world and, if not for their teeth, would be almost completely unknown," said University of Toronto paleontologist Derek Larson.