News Staff
The 5th century Mözs-Icsei dülő cemetery near Szekszárd in the area known as Pannonia dates back to the late Roman period.

Remains reveal the demographic makeup during the beginnings of Europe's Migration Period, when the Huns invaded Central Europe and the Romans retreated from modern-day Western Hungary as the empire collapsed in the face of barbarian hordes.

While that happened, Pannonia's population entered a period of continuous cultural transformation as new foreign groups arrived seeking refuge from the Huns, joining settlements already populated by remaining local Romanized population groups and other original inhabitants. To better understand this population changing rapidly under chaotic circumstances, researcher have again turned to the cemetery of Mözs-Icsei dülő in the Pannonian settlement of Mözs, established around 430 AD. 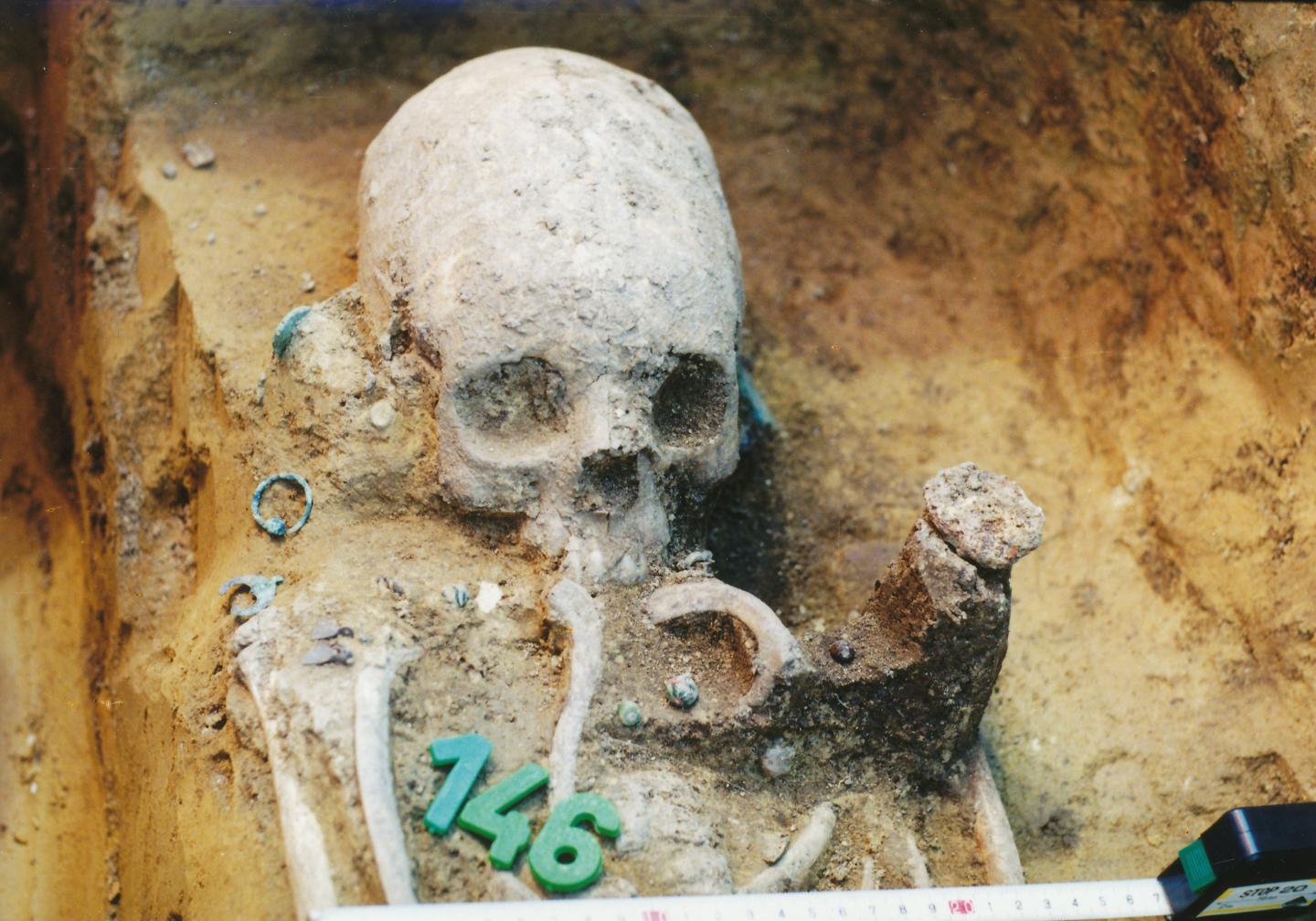 Upper part of the body of grave 43 during excavation. The girl had an artificially deformed skull, was place in a grave with a side niche and richly equipped. Image: Wosinsky Mór Museum, Szekszárd, Hunga

It shows a diverse community with three distinct groups across two or three generations (96 burials total) until the region was abandoned around 470 AD: a small local founder group, with graves built in a brick-lined Roman style; a foreign group of twelve individuals of similar isotopic and cultural background, who appear to have arrived around a decade after the founders and may have helped establish the traditions of grave goods and skull deformation seen in later burials; and a group of later burials featuring mingled Roman and various foreign traditions.

51 individuals total, including adult males, females, and children, had artificially deformed skulls with depressions shaped by bandage wrappings, making Mözs-Icsei dülő one of the largest concentrations of this cultural phenomenon in the region. The strontium isotope ratios at Mözs-Icsei d?l? were also significantly more variable than those of animal remains and prehistoric burials uncovered in the same geographic region of the Carpathian Basin, and indicate that most of Mözs' adult population lived elsewhere during their childhood. Moreover, carbon and nitrogen isotope data attest to remarkable contributions of millet to the human diet.

What of the Huns? They were later conquered by an alliance of Germanic groups. Hun, Aryan, Magyar, Roman, Frankish, Saxons, Danes - Europe was always multicultural. And graveyards show how extensive it was.
News Articles
More Articles All Articles
About