News Staff
If there is an Eye of Sauron in space, ot at least a Marvel villain like Apocalypse, it might look a lot like CW Leonis, roughly 400 light-years away in the constellation Leo.

CW Leonis is a carbon star — a luminous type of red giant star with a carbon-rich atmosphere. The dense clouds of sooty gas and dust engulfing this dying star were created as the outer layers of CW Leonis itself were thrown out into the void. You can see it in all its Halloween-style glory thanks to this image from Hubble. This image incorporates observations from 2011 and 2016 by one of Hubble’s workhorse instruments, the Wide Field Camera 3. CW Leonis is brightest in the red filters, R and I, and therefore the simmering orange color pervading the center of the image well represents the real color of the star.

Observations like this were originally made to answer pressing scientific questions about CW Leonis. As the closest carbon star to Earth, CW Leonis gives astronomers the chance to understand the interaction between the star and its surrounding envelope. This is a particularly interesting object to study as the envelope of CW Leonis is relatively turbulent, with a complex inner structure that astronomers believe may be sculpted by a nearby companion star. 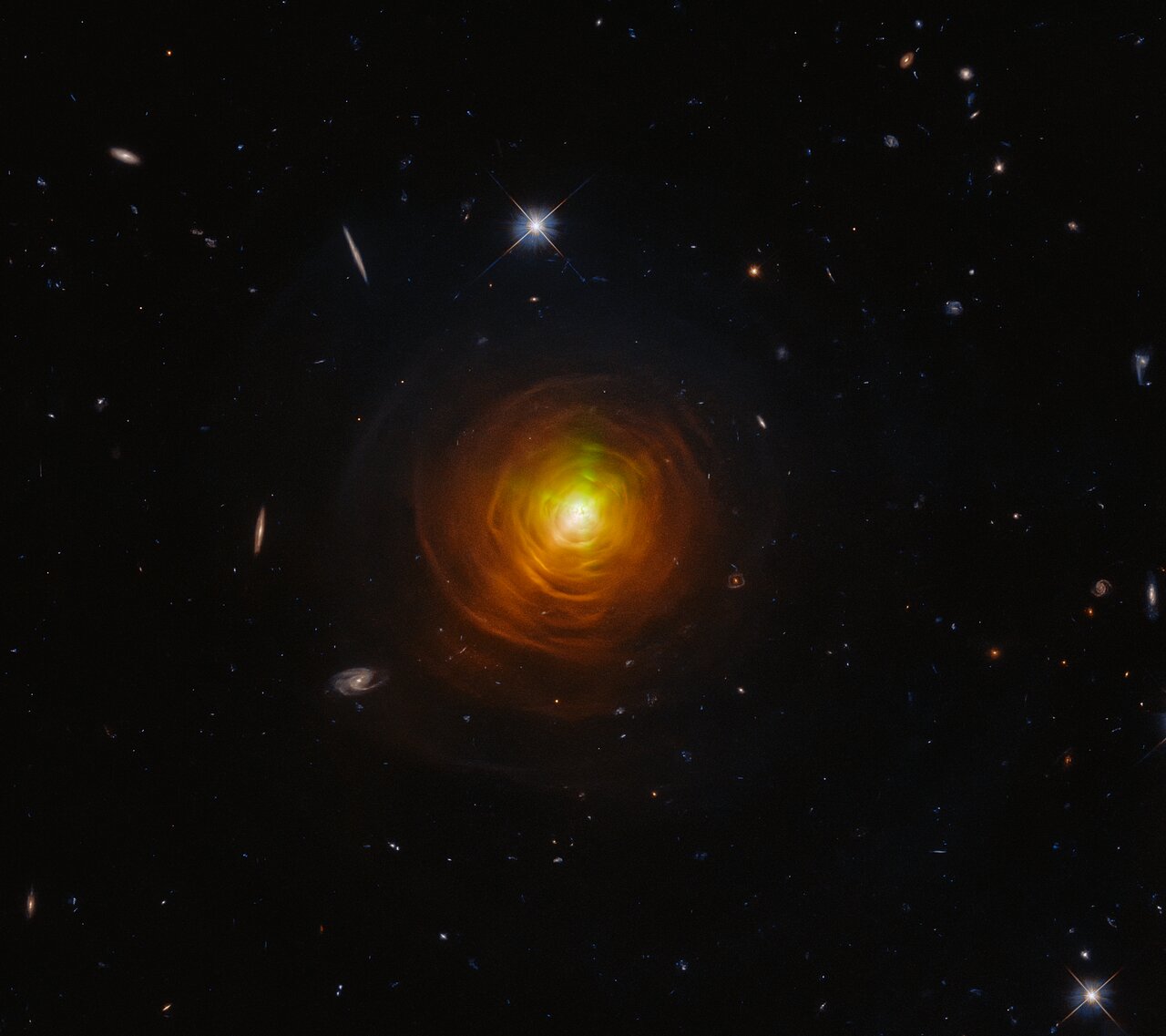 When small to intermediate-mass stars run out of hydrogen fuel in their cores, the outwards pressure that balances the crush of gravity within their cores falls out of equilibrium, causing the star to start collapsing. As the core collapses, the shell of plasma surrounding the core becomes hot enough to begin fusing hydrogen, generating enough heat to dramatically expand the outer layers of the star and turn it into a bloated red giant. Stars in that phase of life eject huge amounts of gas and dust outwards into space, eventually jettisoning their outer layers. In the case of the carbon star CW Leonis, this process has surrounded the star with a dense pall of sooty dust.

The bright beams of light radiating outwards from CW Leonis are one of the most intriguing parts of this image, as they've changed in brightness within a 15 year period — an incredibly short span of time in astronomical terms. Astronomers speculate that gaps in the shroud of dust surrounding CW Leonis may allow these beams of starlight to pierce through and illuminate dust further from the star. However the exact cause of the dramatic changes in their brightness is as yet unexplained.