Unwillingness to cooperate is understandable when small labs are competing with an ever-increasing pool of small labs stepping over each over for finite government funding; if a scientist has an experiment that fails and publishes it, they gave a competitor an advantage, while positive results must be rushed to publication before competitors can do so. Yet cooperation has even declined when it comes to interdisciplinary teams among groups not in direct competition. Meanwhile the same government funding agencies that created the problem are telling scientists to engage in more interdisciplinary efforts.

A new free, online training tool developed by Northwestern, teamscience.net, can develop skills to work with other scientists outside their own discipline, say the creators. In testing, the program's modules - called COALESCE - boosted knowledge about team science and increased self-confidence about being able to successfully work in scientific teams. Most people who completed one or more modules (84%) said that the experience of taking the modules was very likely to positively impact their future research. 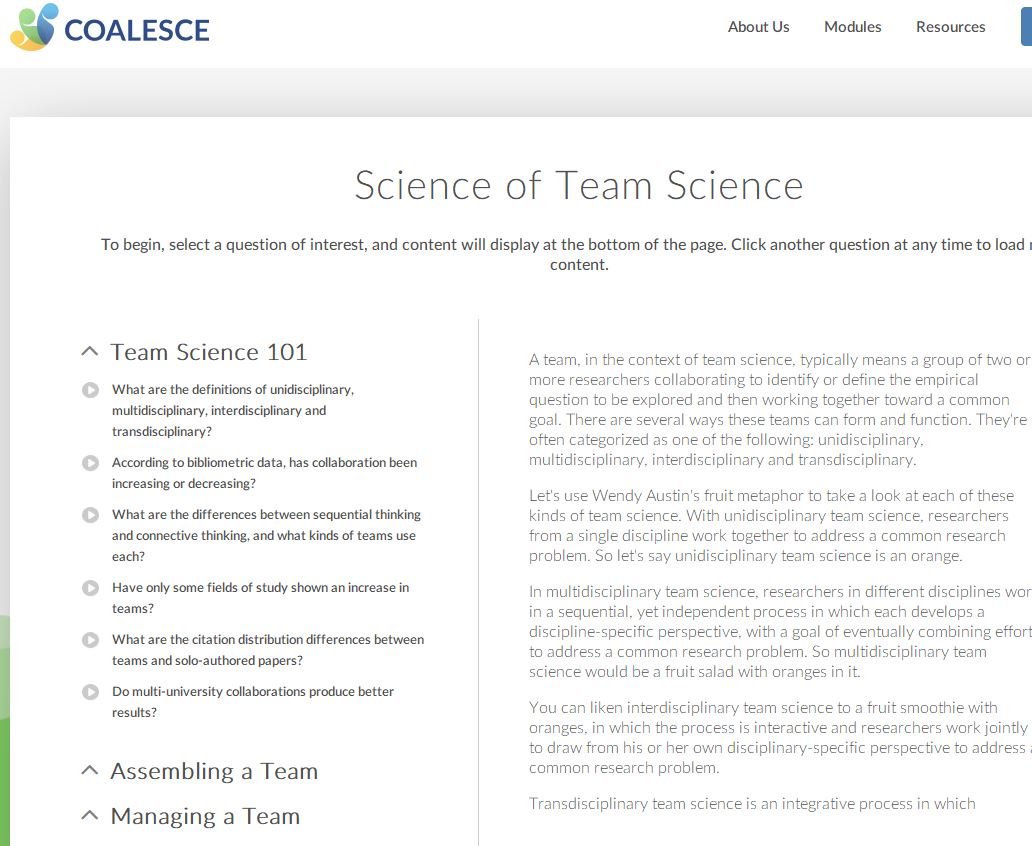 That's a survey so it has little to do with the real world. Claiming to be able to work better in a collaboration doesn't mean people will, especially in an academic culture where free speech is being stifled and everyone is paranoid that people they don't know will misinterpret casual statements and get them censured by their schools. But the tool handles that also, by letting scientists know what to worry about:

1) The ability to choose team members who have the right mix of expertise, temperament and accessibility to round out a team.

2) The ability to anticipate what could go wrong and to develop contingency plans in advance.

3) The ability to manage conflict within the team.

'You stole my idea'

The most common area of dispute among collaborating scientists who responded to the survey is authorship concerns, such as accusations that one person stole ideas from another or that a contributor was not getting credit for their work, the study authors said. Other disputes arise around access to and analysis of data, utilization of materials or resources, and the general direction of the research itself. Underlying all of these issues is a common failure to prepare for working collaboratively with other scientists.

Skills to play well together

The teamscience.net modules help scientists acquire collaborative skills by letting them interact with different problem scenarios that can arise in team-based research. They can try out different solutions and learn from mistakes in a safe, online environment.

More than 16,000 people have accessed the resource in the past six years. Demand for team science training is expected to increase as interdisciplinary teams set out to tackle some of science's most challenging problems.